Another Coaching Season is in the Books 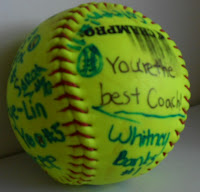 I think about this title and it's a bit ironic.  Yes, I just finished coaching my softball team of sixth and seventh graders, but we didn't keep a score book.  Many may think that's odd, but when you're competition is usually a year older than most of your players looking back at scores is kind of a moot point.

The junior high school across the parking lot from my high school building fields two softball teams.  I assist with the older "A-team" and I am charged with teaching the younger group about the rules and fundamentals of fast-pitch softball.  We play a modest eleven game schedule and most of our games come after the "A" game and have a strict 60 or 75 minute time limit attached to them.

We may have not have had a very successful year in the overrated Win Column, but in my eyes it was a really good season and here's why:
1. the fifteen girls learned quite a bit about the game (base running, fielding, hitting, & etc.)
2. I saw marked improvement in their skill sets
3. they had fun and it seems that most will be back for another go next year

Boy, when I see them again next July I hope they've all added twenty-five pounds and three inches to their frames.  Sixth graders are tiny! 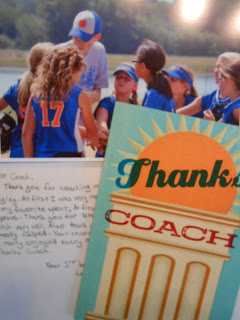 After our season ending tournament on Saturday we took a few team pictures and many pleasantries were exchanged.  I received a hand made thank you card with a note from one of my players and a nice card signed by many of the parents that accompanied a gift certificate to a local sporting good store.  The gift certificate is nice, but hand made cards trump them any day of the week.  Additionally, I was awarded the team signed ball at the top of the post to put on my trophy shelf at school.  Simply awesome!

I can't believe this was my thirteenth year coaching junior high softball and that another season has already come and gone.  Time sure does fly when you're having fun.

Email ThisBlogThis!Share to TwitterShare to FacebookShare to Pinterest
Labels: work