Last year my Cubs lost 101 games and finished in 5th place for the third consecutive year.  It was a rough year.

This year, with the Astros moving to the American League, we're in 5th place, but now 5th place is known as LAST place.  Yuck.

After last night's win against the oh-so-loveable Pirates the Cubs secured win #63, which means if they don't win the rest of the season the most losses they can suffer would be 99.   Theo Epstein has been quote many times as saying "Progress isn't linear", but I'm hoping we are set to see a steady improvement during the next couple of seasons.

Perhaps, the Cubs will be knocking on the door of the second Wild Card in 2015?  Hey, anything's possible!

I guess I wouldn't mind a season in the cellar if we can pick up another player like Javier Baez or Kris Bryant.  Hmmm... that's something to think about...

For the betterment of the farm system and the hopeful impact at the major league level I'm hoping to see this flag fly atop the Wrigley Field scoreboard for the duration of the 2013 season. 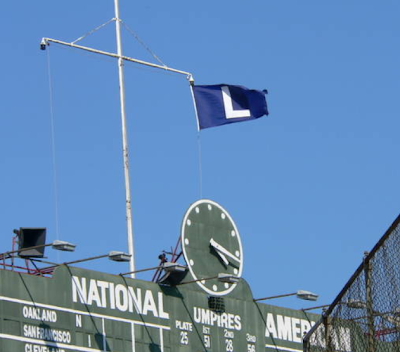