Rolling the Dice and Winning

Sometimes I get the itch to buy retail, but during the last two years the voice of reason has invariably talked me out of adding a pack or blaster to the random grocery run. My collecting habits have changed during this time frame and I'm no longer interested in accumulating cards of players and teams I don't collect.

Recently I scratched that itch, but went a alternative route to retail packs, and I invested in a 4-box break of 2016 Panini Pantheon. Individual boxes run just south of $200 and there are eight cards (all hits) in a box and eight boxes in a case of this high end product.
Before buying into the break I did my homework and took a gander at the checklist. I found there were Cubs sprinkled throughout the product and they were all of bigger named players like Hack Wilson, Ernie Banks, Fergie Jenkins, Billy Williams, Andre Dawson, Ryne Sandberg, Greg Maddux and Mark Grace. 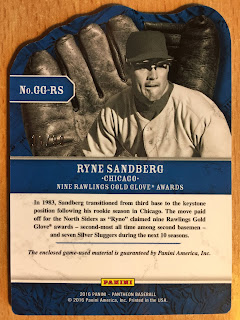 I found a trusted Ebay breaker and watched two of his breaks of the product. The first half case revealed one Cub card out of the 32 cards. Surprisingly, the Cubs were shut out in the second half of the case. Wow, that would have been a bummer if I bought in on that particular break. Doing the math, there was only one Cub card out of 64 in an entire case.

Again, the Cubs are well represented within this product and I decided hitting on only 1 Cub out of 64 cards was more of the exception, rather than the rule. For the price of 1.5 blasters I bought into a 4 box break hoping my half case (32 cards) had the missing Cubs cards from the previous case. 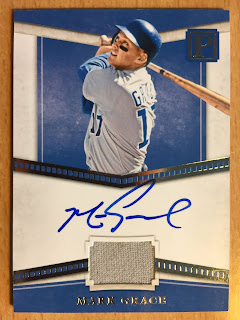 The break went live the same night the auction ended, but I'm no night owl so I watched the video on youtube the next morning. 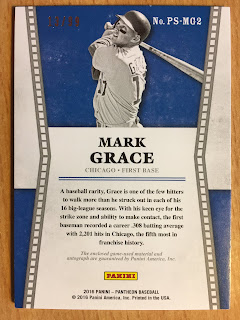 Overall, I think I did pretty well. For starters, I occasionally enjoy the thrill of trying to beat the odds. And something as simple as a well-done break, via video, can be very entertaining when you're invested. The Ryno card was revealed pretty early in the first box, which took the worry about being skunked away. The Grace was at the tail end of the last box and was the icing on the cake!

The cards are really well done. The card stock is super thick, the designs are nice, and I'm a sucker for an on-card autograph. Win-win.

The Ryne Sandberg card goes right into my player collection (929 cards and counting) and the Grace auto-jersey is a fine addition to my Cubs "hits" box. I was hoping to really luck out and get something in the Hack Wilson or Ernie Banks department, but I'm not disappointed with my haul whatsoever.

I don't participate in many breaks, but when I can find a discounted one with fair chance of winning something that fits in my collection I'll strike. For my money, it beats buying a blaster's worth of cards that I won't know what to do with or fist fulls of losing PowerBall tickets!
Posted by P-town Tom at 4/06/2019 04:17:00 PM