Another week, another page to display from the HOF Binder. Page 14 gives us a few more obscure names, three more Conlon cards (which is two too many) and a sweet Topps card from 1960.

No more delaying, let's get to it! 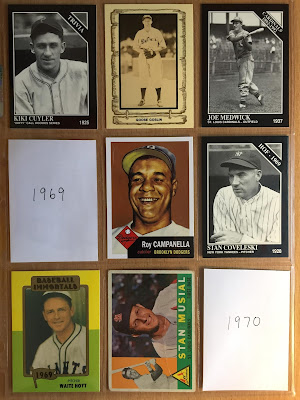 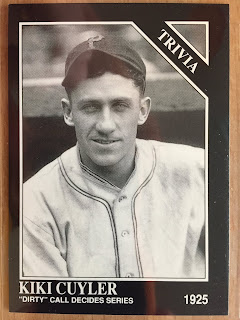 I recognize Kiki Cuyler as a Cub, but he also played seven years with the Pirates, three years with Brooklyn and a year with Cincinnati. He was a fine outfielder who had a career 0.321 batting average and was a threat on the base paths. Four times he topped the circuit in stolen bases, but never swiped more than 43 in a season. His age 26 season, 1925, he finished second in the MVP race when his Pirates won the World Series. That year he scored 144 runs, hit 43 doubles, 26 triples, 18 homers, knocked in 102 and also stole 41 bases while batting 0.357. What a year! 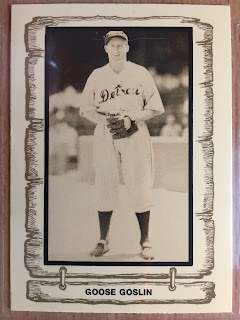 Goose Goslin played during the same time frame as Culyer, and he mostly suited up for the Washington Senators. Also an outfielder, he was more of a power threat in the middle of the order. Gooslin won a batting title with a 0.379 average in 1928 and was also a member of two World Series teams. The career 0.316 hitter had a 14 year stretch in the middle of his career he averaged just under 100 runs scored and over 100 RBIs per season. 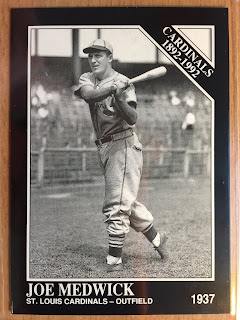 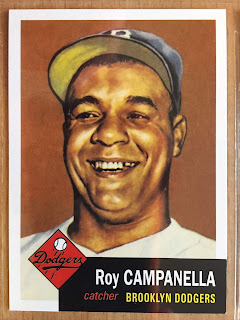 Roy Campanella only played ten years in MLB, but that's because he got a late start due to the color barrier in baseball. He was 26 years old in 1948 when he finally got his chance with the Dodgers. In 1937 Campy actually started his professional career at the age of 15. He was paid more to catch games on the weekend than his father made all week. I'm sure that went over well at home! He was an eight time All-Star and won three MVP awards. Overall, he was one of the game's more productive and popular catchers. 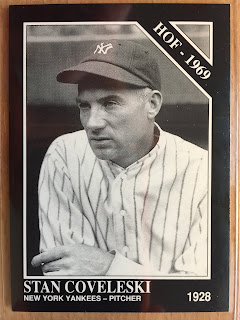 Stan Coveleski pitched for 14 years to the tune of a 215-142 record and 2.89 ERA. He played the majority of his career with the Indians, but here is pictured in a Yankees uniform, with who he played only twelve games. He won two ERA titles during his career and three of four games in the 1920 World Series. Pitching during the Dead Ball Era he averaged 300 innings for a number of seasons while posting a 2.3 BB/9 rate and 2.9 K/9 rate during his career. Baseball sure was different back then. 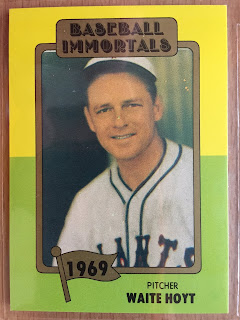 Waite Hoyt, nicknamed School Boy, made his MLB debut at age 18 in 1918. He would pitch twenty-one seasons in all, with seven different teams. In 1927 he led the league in wins with the Yankees, but that's the only time he led a popular pitching category. He finished his career with a 3.59 ERA and a win-loss record of 237-182. 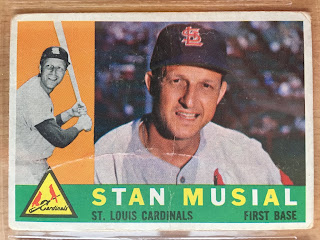 Stan "The Man" Musial. He missed his age 24 season due to military service, but otherwise he was one of the best players in baseball during his 22 year career. He won three World Series, seven batting titles, three MVP awards and was elected to the All-Star game in twenty of his seasons. Amazing. Musial is a very popular player in my area, and being able to find a vintage card of a player of his caliber within my budget took some patience. This 1960 Topps card of Musial is one of my favorite non-Cubs cards in my collection.

Fuzzy corners and creases just add character to my favorite card on the page. Musial wins that honor hands down. The card I would like to replace most is the 1983 Cramer Baseball Legends card of Goose Goslin. It's a very plain looking card with no color to it whatsoever. Ugh. Some day I would like to own a vintage card of Campy, but that will have to wait until I find a beauty of a deal.