The Veteran's Committee was busy during the 1963 and 1964 by enshrining nine players, many of whom were from the game's early years. I could have named maybe two players on this page going into this HOF project. Of the eight on Page 12, Luke Appling is the only one elected to The Hall by the baseball writers, and he represents one of the two I recognize, with Burleigh Grimes being the other. 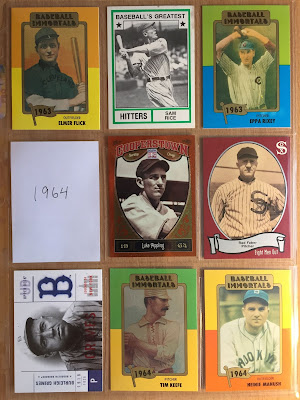 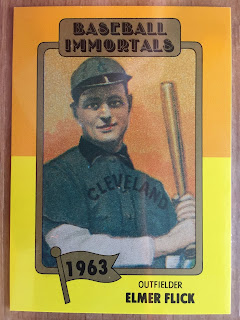 Elmer Flick, an outfielder for Cleveland and Philadelphia, played parts of thirteen years in the majors. He was a career 0.313 hitter who twice led the league in stolen bases and three times in triples. Flick won a batting title in 1905 by hitting 0.308, which was below his career average. I wonder how many times that has happened? 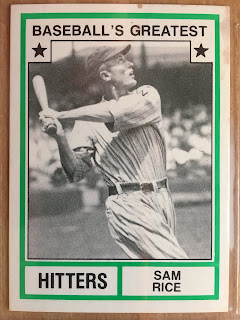 Sam Rice nineteen of his twenty years with the Washington Senators. The outfielder had a career batting average of 0.323 and was consistently near the top of the league in plate appearances. He registered 300+ stolen bases and hit ten or more triples in a season for ten consecutive years. 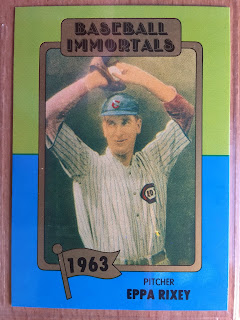 Eppa Rixey's career spanned from 1912-1933 and he pitched for the Phillies and the Reds. He had a career won-loss mark of 266-251 and an ERA of 3.15. Four times he won twenty or more games in a season. He pitched a large part of his career during the Dead Ball Era, but during his 1921 season he gave up only one homer in 301 innings. Wow! 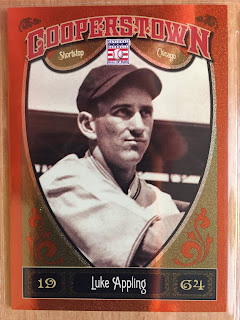 Luke Appling was a seven time All-Star and won two batting titles for the White Sox during his twenty year career. In eleven of those seasons he garnered MVP consideration. I find that to be pretty impressive for a shortstop who had a higher career OBP than SLG, 0.399 to .398.
Side note: How about the orange parallel? I like it much better than the borders of the base cards from 2013 Cooperstown. 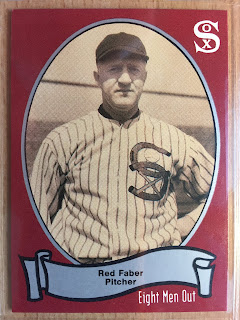 Back-to-back lifetime White Sox players! Red Faber played twenty years with the Sox, with his last year being in 1933 at the age of 44. He won two ERA titles, was a four-time twenty game winner and finished with a win loss record of 254-213 and a 3.15 ERA. 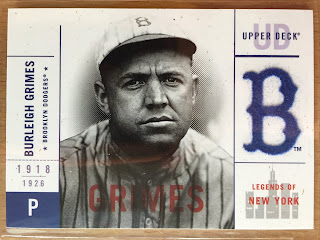 Burleigh Grimes won 20+ games five times in his career and also topped 300 innings in five different seasons. He was a work horse during his prime often at the top of the leader board in games started, complete games, innings pitched, batters faced, hits given up and earned runs given up. His career ERA of 3.53 is pretty mediocre by HOF standards, but he did win 270 games during his 19 year career. 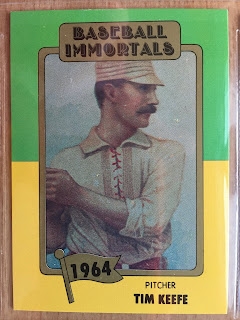 Tim Keefe pitched exclusively in the 19th century for four different ball clubs including the Troy Trojans. Again, this was the Dead Ball Era, but he led the league in ERA on separate occasions with figures of 0.86, 1.58 and 1.74. Defense was different back in this time and looking at his career totals Keefe gave up nearly a thousand unearned runs over his career. In 1883, at the age of 26, he started and completed 68 contests on his way to pitching 619 innings. Whoa! 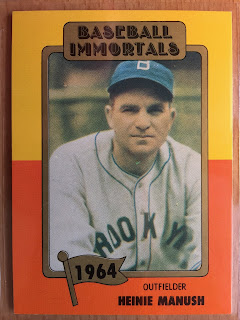 Heinie Manush bounced around with six different clubs during his seventeen year career. Yet, he always hit. The career 0.330 hitter struck out about once every six games and possessed gap power. Manush led the league in being hit by pitches his first two years in professional ball (33 total), but it took him the next twelve seasons to amass that same total. It makes me wonder if he didn't have a scare early on and he changed his stance or philosophy at the plate to avoid being hit as much. Numbers can tell a story, but rarely do they tell the whole story!

I've got some work to do with this page. The Baseball Immortals set once again dominates a page and I hope to abandon some of those cards for upgrades. A couple of these players are represented in the 1961 Fleer set and that would make for a nice replacement if I can find a well-loved copy.

My favorite on this page is actually the Burleigh Grimes card. It's a black and photo, but it's a crisp photo that takes me back a century. Also, the Brooklyn logo is fabric of some sort and quite soft to the touch, which adds to its uniqueness. Cool find for a dime box!