This week's page is one of the smallest in the binder in terms of the number of cards. That'll happen I suppose when one uses markers to note the election years. Personally, I don't mind the markers as they make it much easier to find a player's card.

Overall, I'm fairly content with what you see below. Four different decades are represented within the page and what really makes me smile is that none of the designs are used twice. 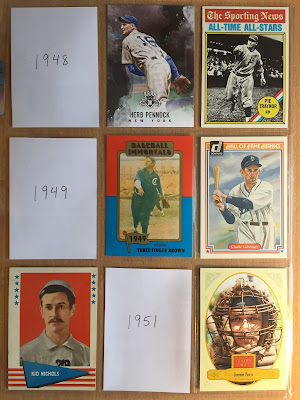 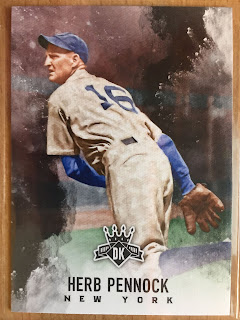 The modern day Diamond Kings brand has been very helpful with this project. I have five cards in the binder from either the 2017 or 2018 sets and they are some of the lesser known members of Cooperstown. Herb Pennock, start his career in Philadelphia and played in Boston for awhile, but he he is probably best known for being a fixture in the Yankees rotation during the 1920's. He won three World Series titles during his career, but I don't that he was ever considered the ace pitcher. He pitched with two other stellar pitchers, Sad Sam Jones and Waite Hoyt, for much of his career. 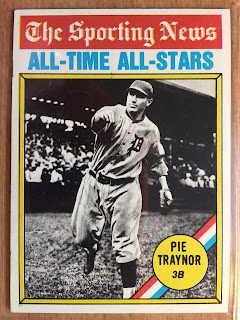 At age 34, Pie Traynor was elected to the first of his two All-Star Games. That may not seem impressive, but consider the fact that he played in the inaugural All-Star Game in 1933. The lifetime Pirate was a career 0.320 hitter, he garnered MVP votes during eight different seasons, and he averaged only twenty-three strikeouts per season. That takes ridiculous bat control and quite the eye! He was the second player to play exclusively at the hot corner to enter the Hall of Fame. 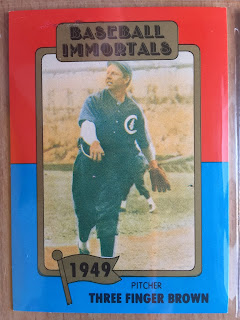 Three Finger Brown is one of my favorite Chicago Cubs. He anchored the Cubs' staff in 1907 and 1908 when they won back-to-back championships. Brown also had a run of five consecutive years where his ERA was below 2. Unreal. His career ERA was 2.06 and he did all of this while pitching with a hand that was mangled as a kid during an accident on a local farm.
1983 Donruss - Hall of Fame Heroes, #28 - Charlie Gehringer 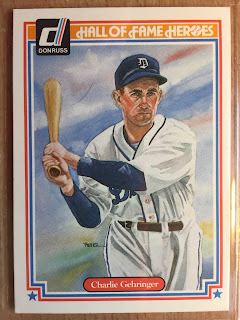 Yankee's pitcher Lefty Gomez once called Charlie Gehringer the Mechanical Man, because "you can wind him up on Opening Day and then forget about him." A model of consistency, Gehringer was a career 0.320 hitter and topped 200 hits in seven different seasons. Gehringer played for the Tigers his entire career and was known to be one the top defenders at second base. He earned MVP consideration during eleven different seasons, and he may have even won the award in 1929, a season in which he led the league in runs, doubles, triples and stolen bases. Unfortunately, the American League wasn't doing well financially and cancelled the award to avoid giving out the traditional bronze medal and cash award to the winner. Ugh. 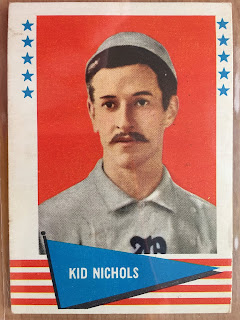 Charles Augustus Nichols logged 424 innings his rookie year during his age 20 season. Kid would average 30 wins and 400 innings during the first tens years of his career. Pitching mostly for the Boston Beaneaters, he finished his career seventh on the wins list and eleventh in innings pitched. What a workhorse! 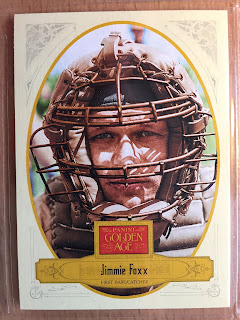 Jimmie Fox, nicknamed Double X, played over 1900 games at first base and only 108 at catcher, but somehow the only card I have of him is wearing the tools of ignorance. #facepalm Foxx is a member of the 500 homer club, a three time MVP, a two time batting champ, and the winner of a Triple Crown. The man was a beast. Actually, Beast was his other nickname!

The Pie Traynor card, from 1976 Topps, is my favorite on this page. 1961 Fleer is a fun set and I like Kid Nichols' flavor saver, but I appreciate the black and white action photos of The Sporting News All-Time All-Stars subset.

The one card I'd like to replace most is the Jimmie Foxx card. I'm sure Panini went with the catcher photo because of its uniqueness, but I'd like something that better represents Jimmie Foxx' body of work. If I can find something will full career stats on the back that would be a plus, too.