Page 6 contains the remaining four players from the Veterans Committee's eleven player class from 1946. The Baseball Writer's elected four more in 1947 and they were all fairly well-known names.
Take a look at this page! Eight cards from eight different sets spanning six consecutive decades, with the oldest being from 1961. This page makes me smile. 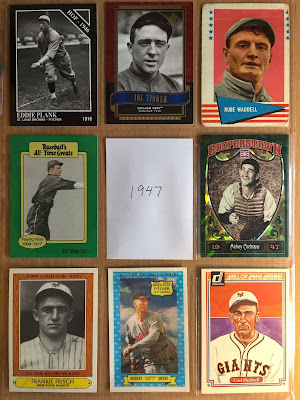 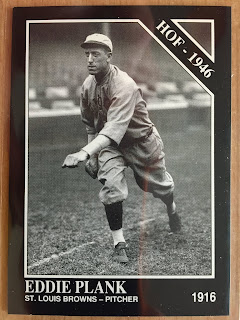 Eddie Plank is probably the lesser known of the eight on today's page. Plank is a 300 game winner and had a career ERA of 2.35. He pitched fourteen years for the Philadelphia Athletics and then for the St. Louis Terrier and Browns his last three season. Twenty-five days before his 42nd birthday he pitched the last game of his career: 10.1 innings while giving up only 5 hits . . . in a losing effort. Wow. 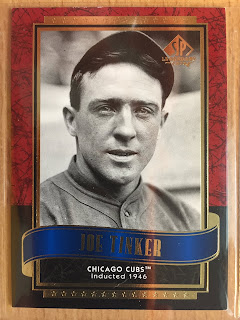 A comment was made on the previous HOF Binder post by Brett about how he would have grouped Tinker, Evers and Chance together, even if it meant going out of alphabetical order. Honestly, I thought about that, but then I remembered that Evers and Tinker hated each other. Evers and Tinker once fought on the field and then the two did not speak to one another for the next 33 years. So, I thought it better to split those two guys up. In my opinion, Baseball's Sad Lexicon should probably be given credit for Joe Tinker making the Hall of Fame after a fairly average career. 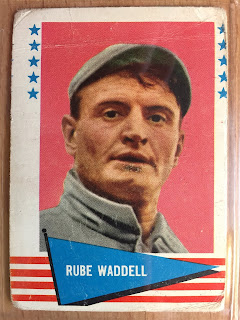 Man, do I love this card. Rounded corners, huge centering issue and a couple of nice creases. Rube Waddell, a lefty, was the best strikeout pitcher during the first decade of the 20th century. He led the league in strikeouts six times. He also didn't give up one home run in 285.2 innings during the 1908 season. Crazy! 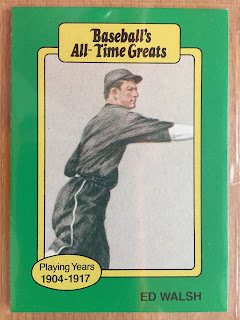 Big Ed Walsh pitched for fourteen years, thirteen of which were for the Chicago White Sox. He is baseball's all-time leader for ERA in a career, as a starting pitcher, with a sparkling number of 1.82. 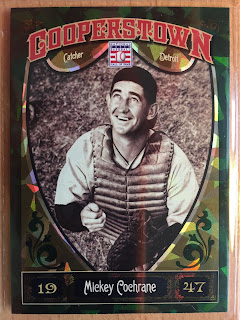 I have the base version of this card, but for some reason I chose the cracked ice parallel. I do love that picture though!. Mickey Cochrane, a lefty swinging backstop for the Athletics and Tigers, finished with a 0.320 career average, two MVP awards and he won three World Series. Arguably, he is one of the best hitting catchers of all-time. 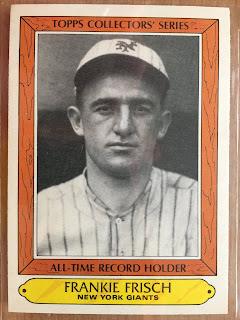 Frankie Frisch was a fleet of foot second baseman who hit for a high average (0.316). He won an MVP and four World Series championships. He played eight years with the Giants and eleven years with Cardinals, where he was a part of the Gashouse Gang. 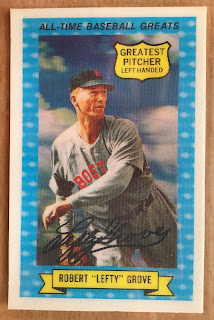 Lefty Grove was a stud pitcher. He won the ERA crown nine times, 300 games, and even captured an MVP award away from Lou Gehrig and Babe Ruth in 1931. During that season he started 30 games, finished 27 of then, had an ERA of 2.06 and a win-loss record of 31-4. Click on the link and prepare to be amazed by what he accomplished during his career.
Oh, Kellogg's. So beautiful! How 'bout that signature at the bottom? Most excellent! 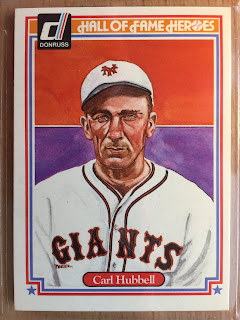 Carl Hubbell won two MVP awards, three ERA titles and was a nine time All-Star. In 1934 he started 34 games, won 21, and led the league with 8 saves. Talk about being a stopper!

Overall, I'm quite content with this page. I'd like to replace the Walsh, Frisch and Cochrane cards at some point in time, but there's no rush.

My favorite card on the page is a tough selection between the Rube Waddell and Lefty Grove offerings. I think I'd have to go with the the 1961 Fleer card with fuzzy corners if I was forced to make a decision. How about you?
Posted by P-town Tom at 2/20/2019 04:17:00 PM