I haven't been checking Ebay on a daily basis for Dan Vogelbach during the last couple months, but I still run my usual searches a few times each week. I'm still missing some of the low numbered parallels from many of the 2017 offerings, but that market seems to really have dried up. Most of the 800+ auctions listed are of cards I already have, are overpriced, and they are automatically being relisted. Every thirty days or so I'm all like, "Look, here's these overpriced Topps Chrome autos . . . again."

Unfortunately, Vogelbach didn't have much cardboard produced of him during the 2018 card season. In fact, I only have 25 cards and the only major Topps set, in which he was given a base card, was Heritage. Heritage is known for some unique parallels like differently colored backs, flipping the colors on the front, flipping the card stock finish and gum stains. Sometimes the parallels are retail only and those seem to be very difficult to find on the secondary market.

Just as this year Topps is celebrating the 150th year of baseball, Topps recognized the 100th year mark with Heritage as it paid homage to the 1969 design.  Cards were stamped with a gold foil "100th Anniversary" stamp which are supposed to be limited to 25 copies.

I hadn't seen one copy until about two weeks ago.

Yes, I give you permission to Ogle that Vogel! 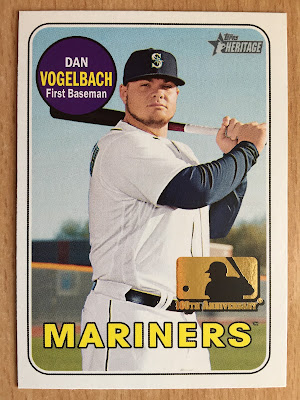 I was the second bidder on this item, which had free shipping, and I won it for a scant $1.52.

Easily my best Ebay bargain of the year to date!

It's not shiny or serial numbered and it doesn't have an autograph or contain a relic, but it's a low print at a great price. Plus . . . VOGELMONSTER!