On to Round 3 of Pack Wars, featuring the dollar store repack (left) versus the Zippy Zappy repacks (right). 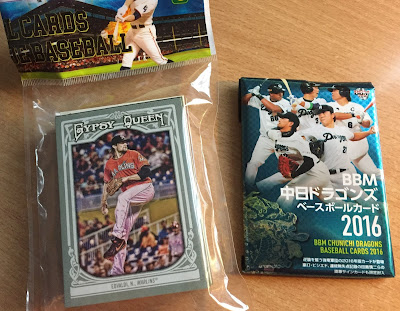 The Zippy Zappy packs have been heavy on the Bowman and BBM cards so far, which really hasn't given the dollar store repack much of a chance. In fact, the Zippy Zappy cards have won the last ten match-ups. Let's see what the next battle brings! 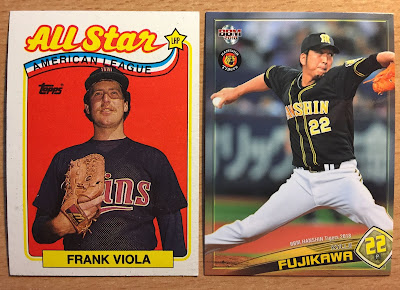 Frank Viola was a pretty good pitcher back in his day, but I'm really digging the 2018 BBM design. Plus, more cards for the Kyuji Fujikawa player collection. Woo-Hoo!
Zippy Zappy takes an early lead! 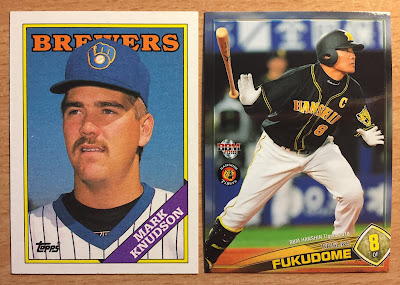 Seems to be a theme lately... over-produced card of a player I don't remember versus BBM mojo in the form of Kosuke Fukudome.

Here's a look at the first two winners side by side. Notice how the BBM and team logos moved to accommodate the pictures. Addition to detail. I approve. 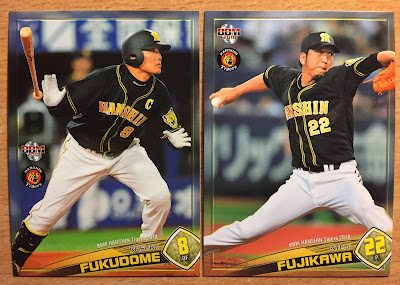 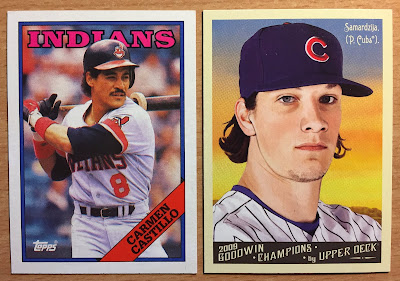 An early Jeff Samardzija card versus Carmen Castillo. I thought Carmen played for the Cubs in the middle 80's? Do I have my Carmen's mixed up? The back of his card does not reflect what my memory is telling me.
Shoot, baseballreference.com doesn't even have a listing for Carmen Castillo. This particular player is listed as Carmelo Castillo.
I wish I could give negatives in the scoring system, because this piece of junk wax has wasted too much of my time. Easy point for Shark. 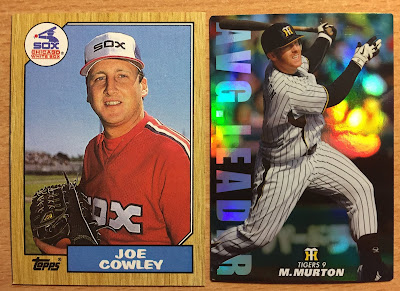 Let's just ignore the dollar store card this time. Matt freaking Murton! Holy cow! I never thought I would own a card from the time he played in Japan. Matt was a fan favorite during his stay in the Windy City and I'm super pumped to add this one to the Cubs box!

I thought I would show off the back side of the Murton card. Good stuff. Here's a link to his stats if you want to see what kind of damage he did to the NPBL while he was there. 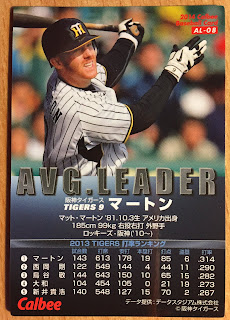 I'm not quite sure what the far right column of stats is for, but it doesn't match up with his batting averages with Hanshin. 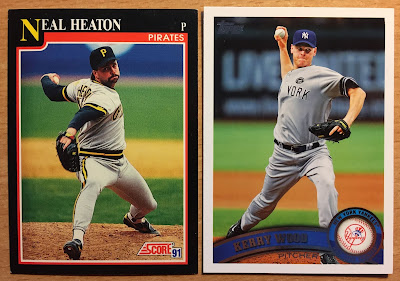 Kerry Wood playing for the Indians and the Yankees was a tough time for this KW fan. I was super glad when he returned to the Cubs and retired with the team. I actually still remember where I was when he pitched his last game. I shed a tear or two. Baseball will do that to me.
Neal Heaton is an afterthought in this case. 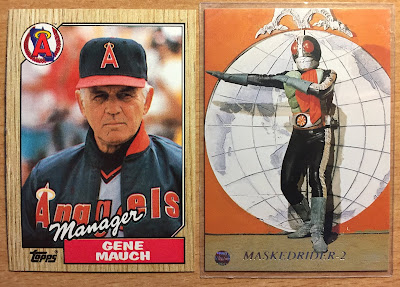 1987 Topps manager card of Gene Mauch vs. the Maskedrider-2? Um. Well. You see.  I got nothing.
I know nothing about the Masked Rider other than what I just found on the internet: the idea for the show originated in Japan, but a reboot came to the US in the mid 90s. It's sort of a spin-off from the Power Rangers?
I'm sure this card is much cooler than what I'm giving it credit for. Plus, the other side is only offering up... junk wax... sigh. A point to Zippy Zappy's creativity. 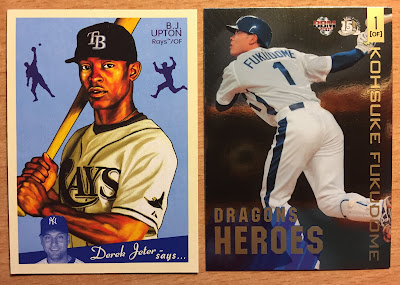 I think B.J. Upton, after a short spell of going by Melvin, is back to being B.J. again. Fukudome is still Fukudome, which means his cards rule and tough to defeat in Pack Wars. Sorry, B.J. 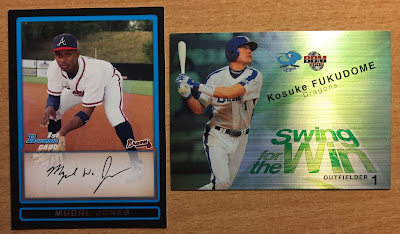 I appreciate the spelling of Mycal Jones' first name, but Fukudome is swinging for the win. So shiny! 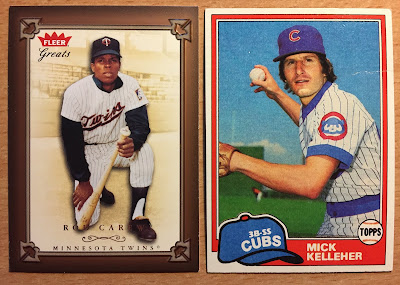 Fleer Greats is a super fun set and Rod Carew, sporting a warm-up under his jersey with sweet stirrups, will not be denied. Mick Kelleher is before my time and I already own a copy of this "vintage-esque" card. The dollar store is on the board! Wow. Zippy Zappy had a shutout going, too. 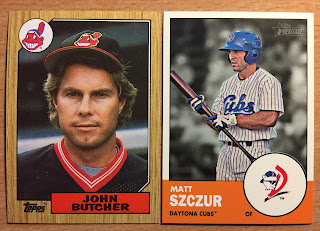 John Butcher needs a bigger hat or a haircut. I can't decide.
Super Szczur! Man, another pre-rookie card of one of my recent favorites!

I think the only surprise here was the Rod Carew upset, which came out of left field. I'm feeling really spoiled by Zippy Zappy's generosity and I still have one more pack to go. What do you send back to a guy who has started to steer away from baseball and is focusing more and more on . . . <gulp> . . . hockey cards? I'll figure something out!