If you missed the first part of The Collection I was gifted from one of my wife's book club friends, then you can click here to go back and catch up to see the contents of the first banker's box. And yes, there is a second.

At the bottom of one corner of the second banker's box there was an unopened wax box of 1988 Topps. 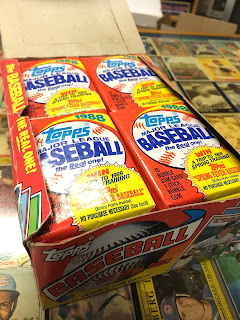 I'm not quite sure what I'm going to do with this wax box of 36 packs. I already have a couple of hand collated 1988 sets. It could be a fun rip for someone, but that someone isn't me. I started collecting in 1988 and the ten year old me studied the card fronts more than my school work back in the day. And, that's saying something, because I was somewhat of a school nerd.

Thee were some sets in the banker's box also. 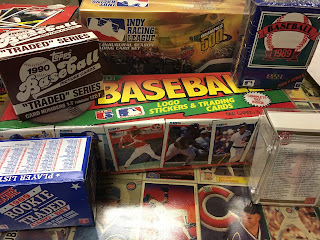 Three update sets, an entire 1990 Fleer set, a weird Indy Racing League box set, and a commemorative St. Louis Cardinals 100 Year Anniversary set, of fifty-five cards, produced by McDonald's. I vaguely remember these cards being offered at local fast food chain in Central Illinois back in 1992. Cardinals. Hmph.  They don't interest me at all. Any takers?

Speaking of things that don't interest me: 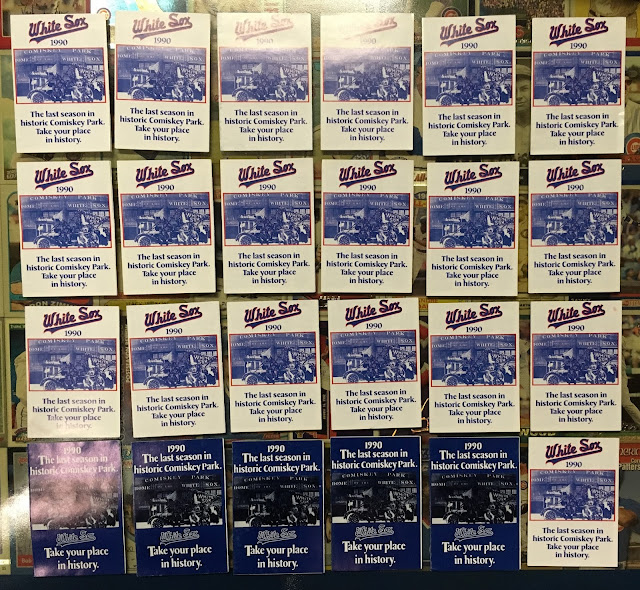 That's a LOT of pocket schedules. Did you know the last season for historic Comiskey Park was 1990? I actually did, but that's because I can still picture the 1991 Upper Deck "Ground Breaking" card of Cartlon Fisk and Robin Ventura.

There were a couple of 300-count boxes packed with cards in top loaders. 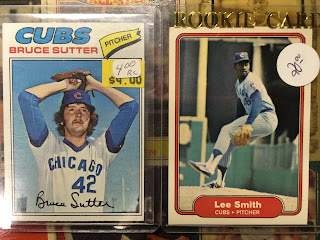 Most of the cards were dinged up a bit. Even still, many of these cards are wonderful adds to my humble little collection. I just hope the original owner didn't really pay $20 for a 1982 Fleer Lee Smith card. Yikes! 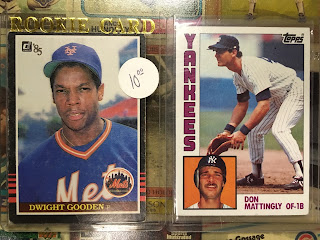 A couple early cards of some guys who did well for the New York teams. 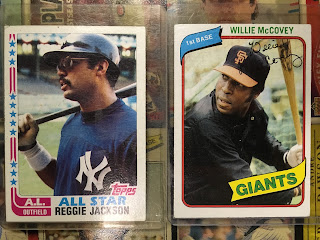 I'm actually considering building the 1980 and/or 1979 Topps sets now that I've sorted through the collection. Having Dave Winfield's 1979 card, even though it's off center and sporting fuzzy corners, is a nice step toward building a set. 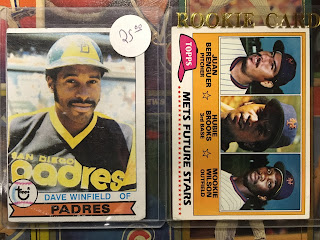 Some of the cards in top loaders had me scratching my head. Future Stars Mets card? Uh-huh.

Jack Concannon was one of the many terrible Chicago Bear quarterbacks. For those of you who are curious, that's what a 1965 Topps football card looks like. You'll more than likely never see another on this blog again. 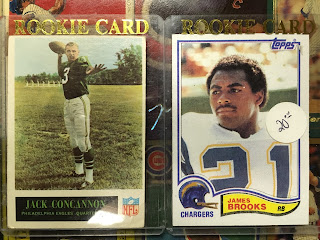 I like the design of 1982 Topps football set a little more. Yes, it's James Brooks rookie card, who later made a name for himself for the Bengals in the later 80s. This card can be had for 18 cents on Sportlots.com. 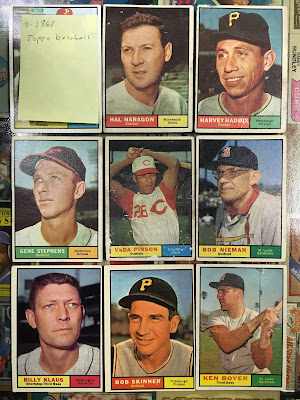 1961 Topps singles. Very nice. FYI, I found the cards with the sticky notes attached to them and they were removed without adding any surface damage.

It gets better. My collection is was pretty void of anything from the 1950s. 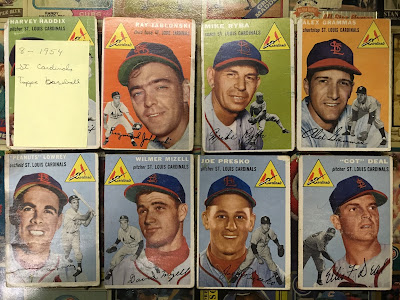 Again with the Cardinals? Ugh.

The cards were wrapped in rubber bands, which literally broke into dozens of pieces when I tried to extricate the cards.

I have to admit, seeing rounded corner cardboard, bound by rubber bands, really got my blood pumping. It was such a cool find that I had to race upstairs to show my wife. She never really pays much mind to my hobby, but she flipped through the cards with what appeared to be genuine interest. That, in itself, makes this find something special! 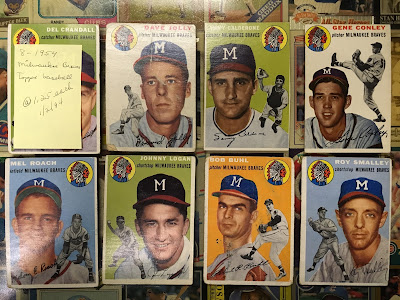 Braves vintage! I just received another package from Johnny's Trading Spot.  I wonder if he could use some 1954 cards of his team of choice?  Or maybe John would enjoy the 800 count box of 1990 Donruss I found in the first banker's box?

Random 1954 cards, including Preacher Roe and Johnny Sain. I actually have heard/read about two of these guys.  What was it... Spahn and Sain and pray for rain?  Cool!

These were added to The Collection back in 1994 at $1.25 each, as the sticky note makes mention. I'm not up on vintage prices, but I feel like that would be a decent deal these days.

For the record, all of the 1961 and 1954 cards were purchased at the estate sale auction I mentioned in the previous post. I found the auction receipts and claims at the bottom of the box. I wish cardboard could talk... I would love to know how well traveled these cards are and how many collections they have passed through.

Well, that's it for the highlights of the second box. That leaves us with two 5,000 count monster boxes and one large random box to go.