Fun Time In the Burbs

My wife likes to spend hours at a time during the winter at King Spa & Sauana in the Chicago suburbs . . . and I don't. I very much dislike the heat and the idea of sitting around sweating with a bunch of other dudes. It doesn't appeal to me at all. We've found a solution though... we go during times when there are card shows!  Woot!

Holy cow, did I have a fun time last weekend! 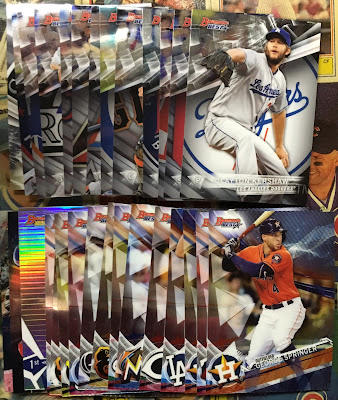 More shiny cardboard, but this time the boys in blue! 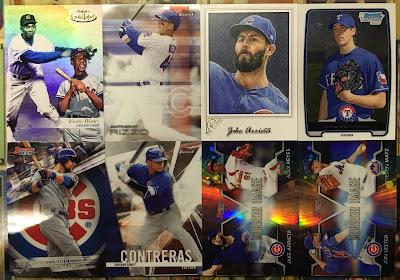 Yes, that's Kyle Hendricks' first Bowman Chrome card... also for ten cents. That might have been the steal of the day.

The dime boxes were very good to me.  I don't have much in Mike Schmidt department, but I do now. 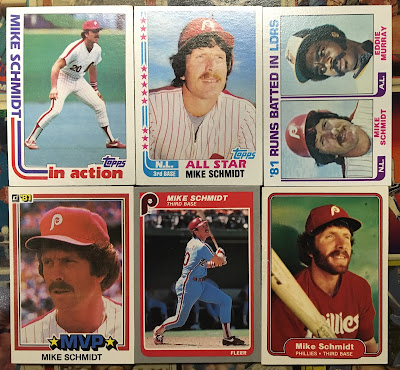 Back when my sister and I started collecting cards we would get a kick out of trying to pronounce Schmidt's last name. Six consonants and one vowel... for kids who didn't yet know who Mike Schmidt was... lol! Yeah, that was similar to Harry Caray trying to pronounce "Mark Grudzielanek" after seven or eight innings of beer. I can still hear my sister cackling at our attempts!

I have a new found appreciation for the early 80's as of late. 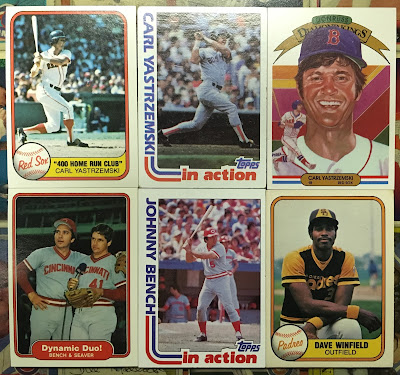 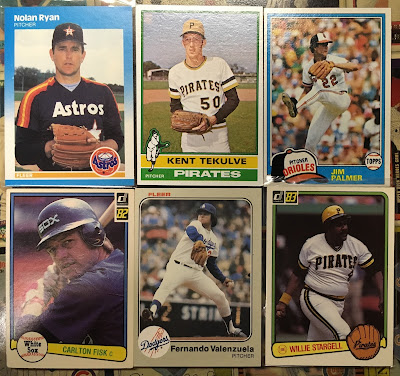 Gosh, I had fun picking through the numerous dime boxes. I even found some cards trying to pass as actual vintage.  I put those in the pile, too. 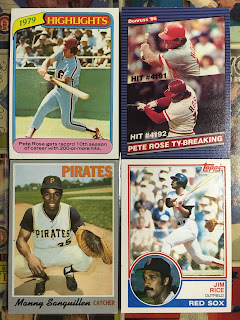 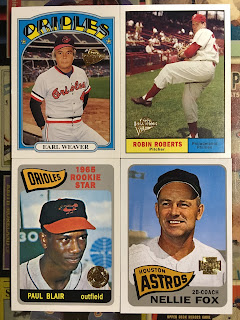 I plucked out many cards for my Hall of Fame binder. This is just a small sampling, but I take what I can find of guys like Lou Boudreau. An actual vintage card of Boudreau, a guy who was an 8 time All-Star in the 1940's, is going to set me way back. 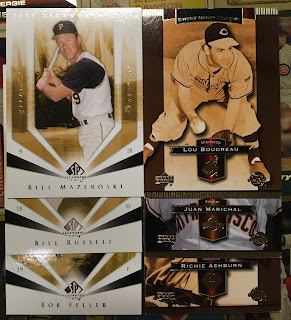 Oh, Topps Gallery, look at what you have become. 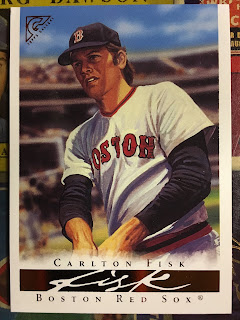 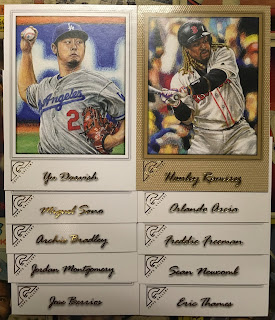 The artwork on the left is so clear and crisp... the 2017 version left me wanting more, but that didn't stop me from adding a dollar's worth of it to my pile from the dime box.

Did you know Mel Allen had a baseball card? I grew up watching This Week In Baseball and I still regularly use his catchphrase of "How about that?" I'm choosing to ignore that this is a New York Yankees card. 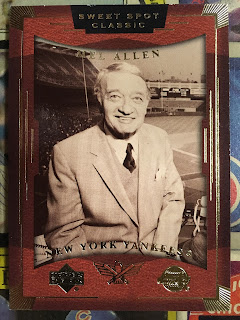 I've almost purchased a blaster of Panini Contenders numerous times, now that itch has been scratched for about three bucks. Yep, I added about thirty cards to my pile of the brand from the dime box. 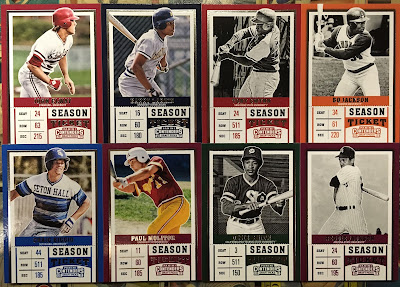 Yes, your eyes are not deceiving you. That IS John Elway in the upper left. Good stuff!

Here's the last of my dime box purchases: 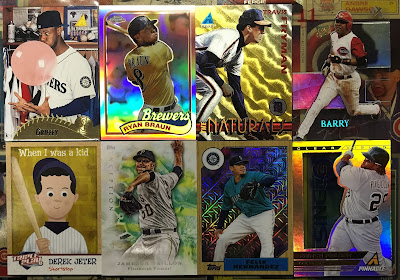 I think the best of the lot is the Barry Larkin acetate card, but that's only because I already own a couple copies of the Griffey. 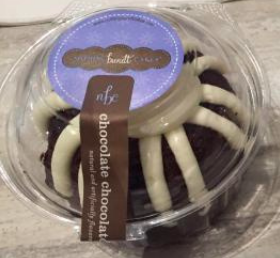 Yes, that is a bundt cake.  I was given a door prize ticket when I paid my entrance fee to the show. a half hour later I was the proud winner of a chocolate bundt cake from Nothing Bundt Cakes and a $25 gift certificate to any dealer's table at the show.  (For the record, I split the cake with my wife and it was phenomenal!)

I made a bee line for one of the vintage dealers at the show and bought 30 star cards from the 1980 Topps set. The sticker price of the cards was $31, but he flipped through and said, "How about twenty-five."

Yeah, it was a good morning. By the way, I now have a small 1980 Topps want list up and ready.  I still need the Rickey Henderson rookie, but I'll pick up a cheap/dinged copy at some point. The search for the perfect bargain is part of the fun!

I also made it to a brick and mortar shop and bought a brick of 1980 Topps commons from the establishment. Did I mention, I still had the "fun money" my grandfather had given me for Christmas?  Yeah, I'm forty years old, and my grandfather still gives me cash to have fun with.

So, part of his gift to me was spent on a large stack of 1980 commons and the rest went toward what I consider to be my best purchases of 2018.

This is the last card to complete my run of Topps Ron Santo cards. 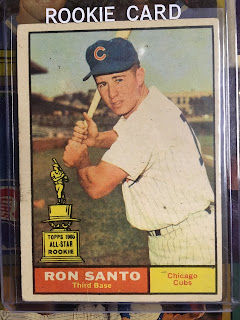 Sure, it's not the best condition, but I think that can be said for most of the cards older than me in my collection...  and I'm okay with that. I like to think cards with rounded corners have a history they can tell.

Here's a couple of more cards that are almost as old as my grandfather. 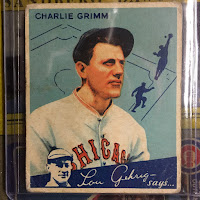 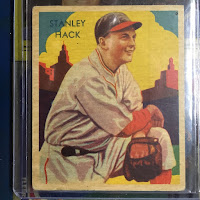 The "Lou Gehrig says..." card is from 1934 and looks like an original Goudey card, but it's not!  Take a gander at the back. 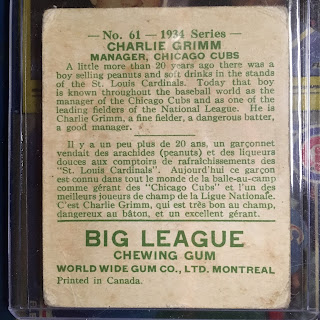 Oooh, la, la! It was made in Canada by the World Wide Gum Company and half the card is in French. Pretty neat!

I have a mini Stan Hack collection and this is a great addition: 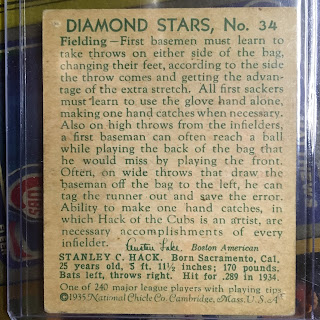 It was a great day for cardboard as I made a huge dent in my 1980 Topps set, purchased bunch of trade bait from the dime boxes, and made some wonderful fuzzy-cornered purchases.

That night my wife and I went out for dinner and drinks with some friends. I topped the day off with a couple of delicious adult beverages from Hala Hahiki, a fun tiki bar. 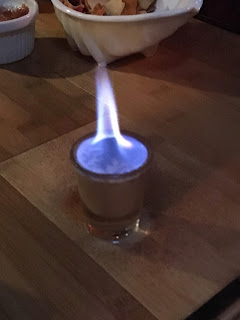 Yes, that shot is on fire!