The summaries of the first two large boxes of cards can be found here and here. Today we'll touch on the third of the five boxes within what I have dubbed as The Collection.

So, there were two 5000-count boxes and I could tell from the weight that one was full and the other one was not. I went with the lighter of the two boxes to give myself a little bit of a sorting break. 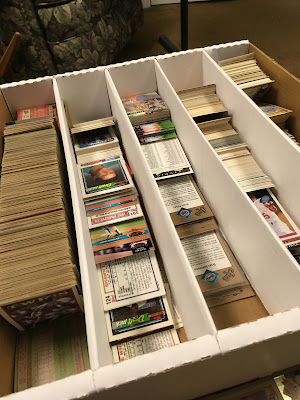 There may have been 1,600 cards bouncing around all loosey-goosey like in this box. Many of the cards were Topps cards from the late 80s and early 90s and their corners did not take well to all that freedom. They found the recycle bin. I don't mind junk wax, but I can't deal with damaged junk wax.

Luckily, there were still a few gems to photograph and post here on the blog! 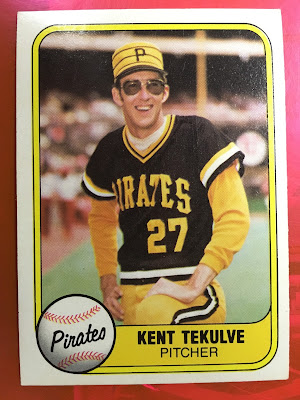 Behold! A 1981 Fleer Kent Tekulve card!  I don't think there are many players, on cardboard, who are universally revered as highly across the blogs as Kent Tekulve. Gorgeous card!

Alright. Do me a favor and hit play on the youtube.com video below.

It will only help set the mood.

I don't know what he saxophone player in Careless Whisper looks like, but I picture him looking a little bit like Joe Pettini. 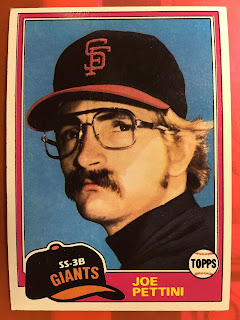 Okay, you can shut the video down if you like.

We're moving on, but bonus point will be earned for all of those who allow the song to play out. 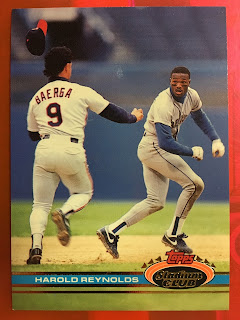 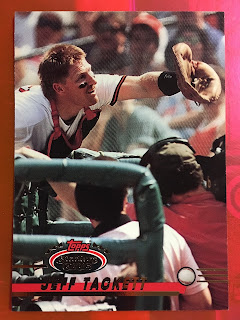 Another unique shot gives us Jeff Tackett reaching into the stands for a foul pop-up.

There was a little vintage in the box and one mini 1975 card. 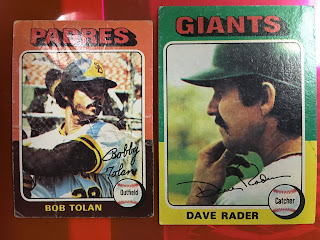 Bon Tolan? He's pretty beat up, so much so Dave Rader can't look away.

These were my favorite in the box: 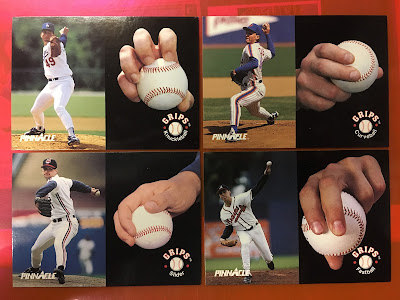 In 1992, Pinnacle put out a series of cards demonstrating pitching grips. Pretty cool for a cardboard collecting high school pitching coach like myself. 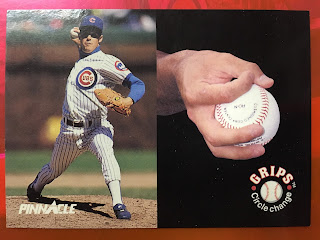 I teach my pitchers the circle change when I can. I have my pitchers grip across the seams, but I can see the advantage to gripping it with the seams. Pitch movement, especially when metal bats are involved, is always a positive.  I may have to have them experiment a little. Thank you Pinnacle and Mr. Maddux!

Whelp, that's it for box #3 of The Collection. It was a little bit of a downer, but I suppose they can't all be walk-off homers.