I've Been Gifted a Collection

I was out of town for an educational conference covering standards based grading for two and half days days last week. The timing stunk, you know, because Topps Series 1 dropped on Wednesday.

Me?  I was traveling in a Suburban to Indianapolis. Sigh. Even though I wasn't able to get away and purchase any product I was in a hotel conference center with Wifi... thank goodness for the blogs!

When I returned this past weekend my wife said one of her co-worker's book club friends's had decided to let go of her father's sport collection. I went down stairs and here's what I found in my man room: 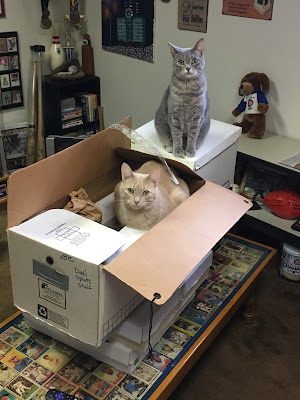 Yeah. Two cats and a bunch of boxes.

For the record, I guess the co-worker is in her 50's. Hmmm...  But, the real question is when did the father collect? If it's from his childhood, then we're looking at cardboard from the 1950's or 1960's. If the hobby was something he dabbled with in his retirement, then I'm looking at a bunch of stuff I already probably have.

I haven't touched the boxes yet. My busiest part of the calendar year is almost here and I'm not sure I want to start this sorting project while my high school baseball coaching season is taking place. Then again, there's a good chance my curiosity will get the better of me.