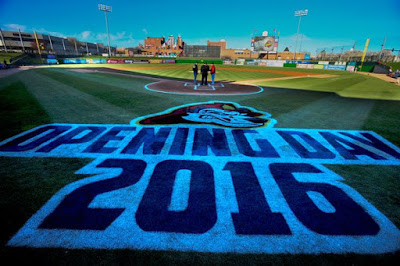 Yesterday was a day filled with baseball for this blogger. The high school baseball team I coach won a doubleheader on the road yesterday, which was a nice way to start the day. Never you mind that the temperature never got above 46 degrees during the five hours I was outdoors. Thank goodness for layers and layers and layers of clothing! 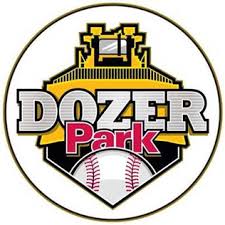 Afterwards I had just enough time to change out of my uniform and into some other warm clothes before jetting down town to the ballpark for the Peoria Chiefs' home opener. P-town is lucky to have such a fine stadium in Dozer Park, and even luckier to have the Chiefs, who are affiliated with the Cardinals.

Just 40 minutes to the east Bloomington-Normal has an independent minor league team, the Normal Cornbelters, but they are an independent team with the Frontier League. Watching independent league baseball is akin to opening Panini products when Topps has the only license. 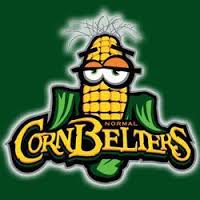 Granted, I'm not a fan of the Redbirds, but at least I can see some of draft picks from the last few years within minutes of my home.

I miss rooting on the future Cubs, but seeing professional baseball live for the first time in six months certainly had me amped up and ready to go! 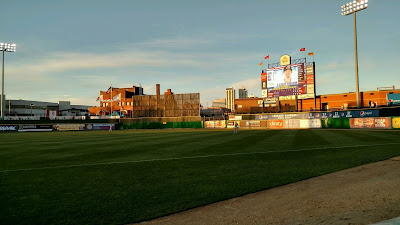 The Chiefs ran a promotion on Leap Day and any one could purchase 29-cent tickets to Opening Day and $2.29 tickets to any other game, except July 4th. There was a cap on the number of tickets one could purchase, and suffice it to say I met my quota. Twenty tickets for $37.80! Heck, on same days that won't even get you into Wrigley Field!

I sat with my good friends Jim and Craig in the first row down the right field line, within spitting distance of the bullpen. Great seats, fine company, and less than stellar baseball. I guess I'm a little more critical of on-field decisions now that I'm coaching my own team, but I felt both sides could have played better defense. And for the life of me I couldn't figure out why Burlington, already down four runs in the third inning, was still playing the entire infield in with the bases loaded and less than two outs. A couple of seeing-eye-singles later and the score was 7 to 0 and at least one of those balls would have been a tailor made double play to get out of the inning. Play the corners in and the middle back! 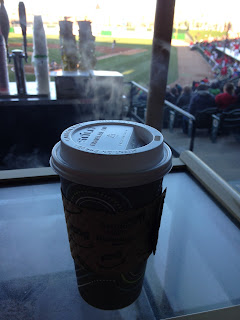 I suppose it's easy to second guess when you're sitting in the stands warming your hands on a cup of hot cocoa and engulfing an Inferno Burger.  Mmmmmm... Inferno Burger...

Anyways, I'm glad baseball is back and that includes MiLB as much as MLB.  I'm not sure how many games I'll see in person this year, but I'm hoping to see the Tennessee Smokies and South Bend Cubs, who are both affiliated the Cubs. As always, you can keep track of my progress along the right margin of the blog.