It's time to rip into the second pack for 2014 Panini Classics.  Is it possible that it could top the first pack?  We'll have to find out, but in the meantime let's see how it fares against a pack of 2008 Upper Deck First Edition. 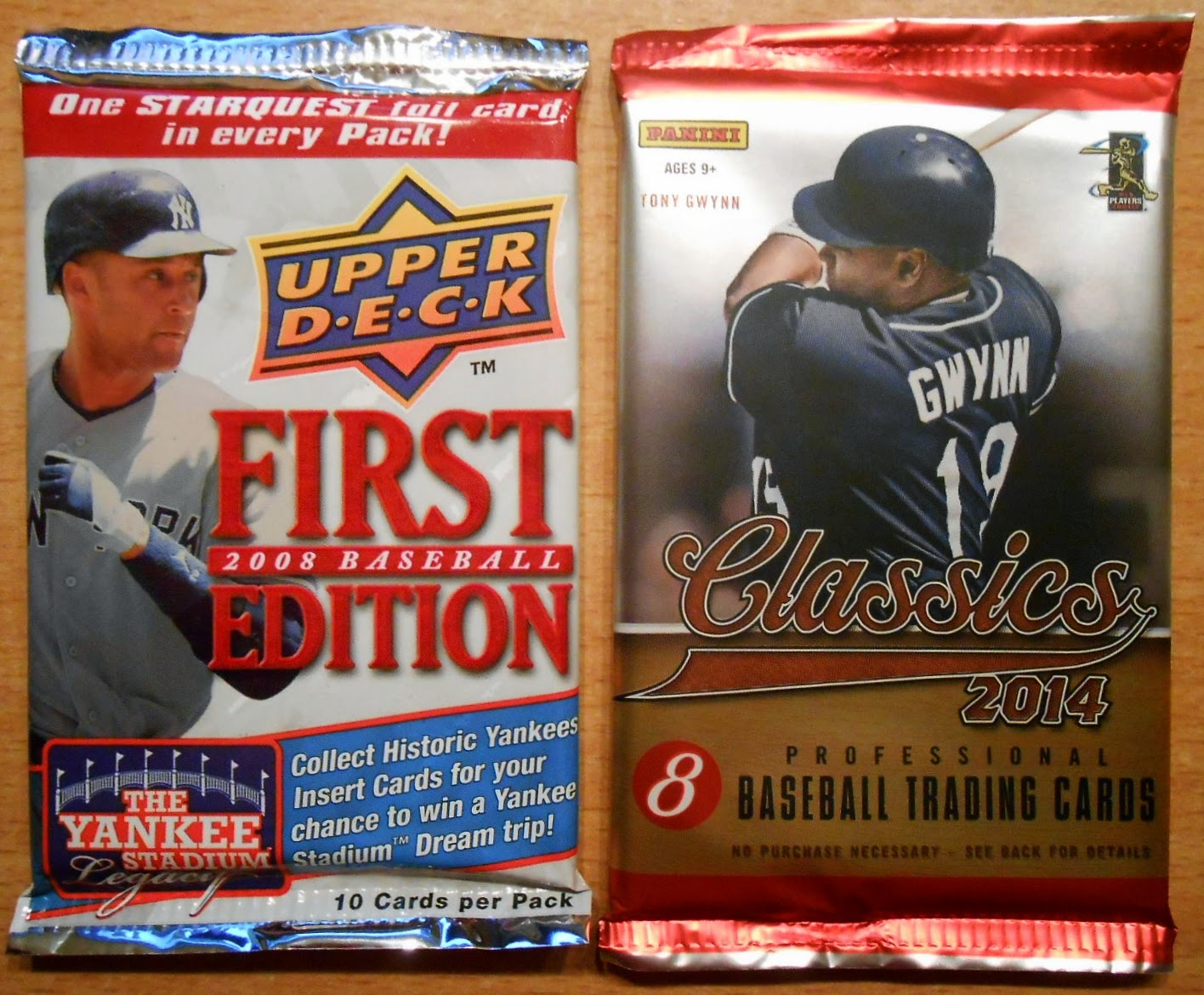 First Edition has two more cards within its wrapper, so the first two cards of Panini Classics is going to get tag-teamed. 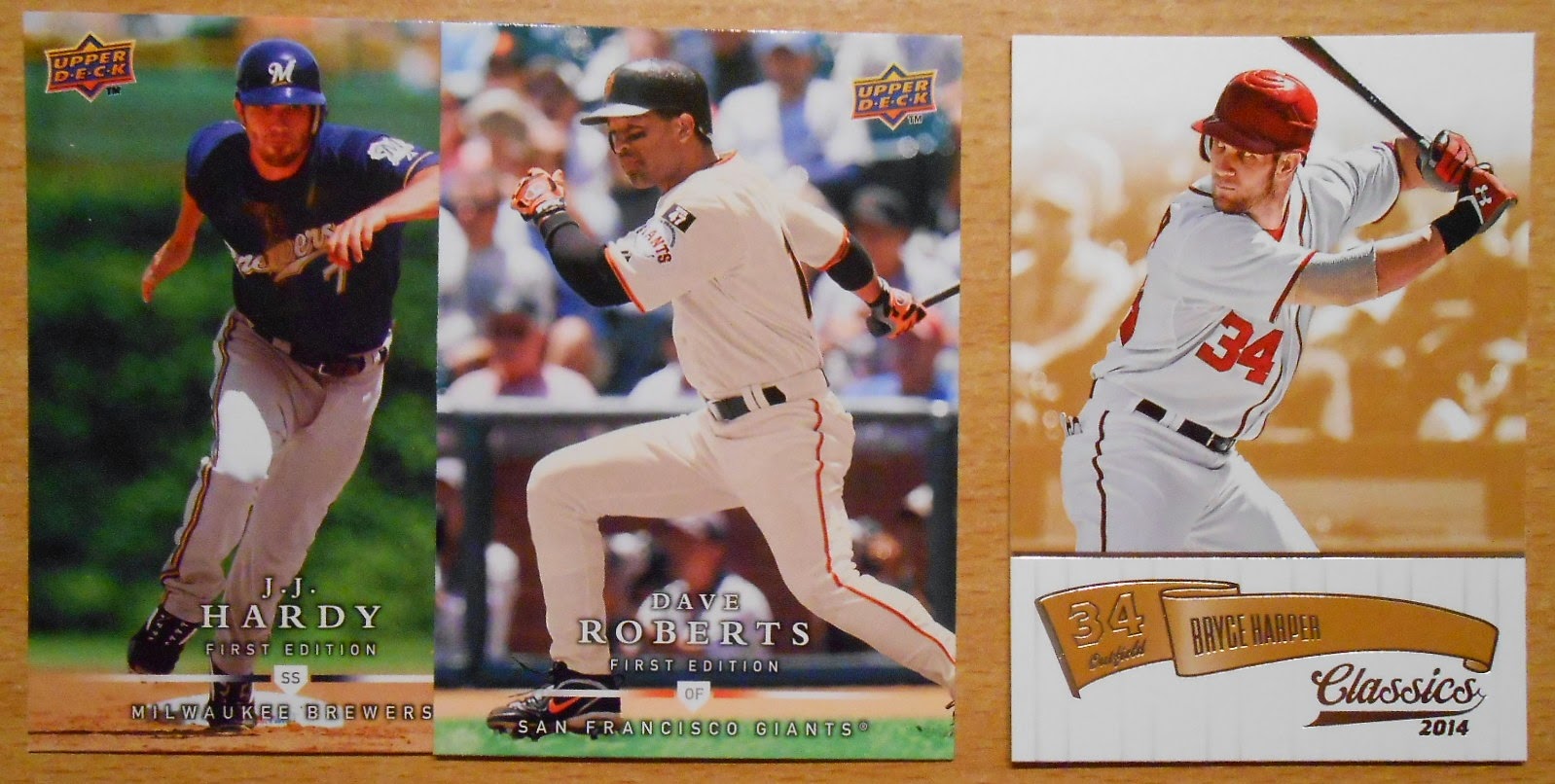 A nice baserunning shot of J.J. Hardy and card of Giant before they started winning all of the World Series.  Bryce Harper?  Yep, he's still one of my favorites and I'm still waiting for him to have that breakout season.  Panini Classics is on the board first even with the Washington 'W' missing atop Bryce's dome. 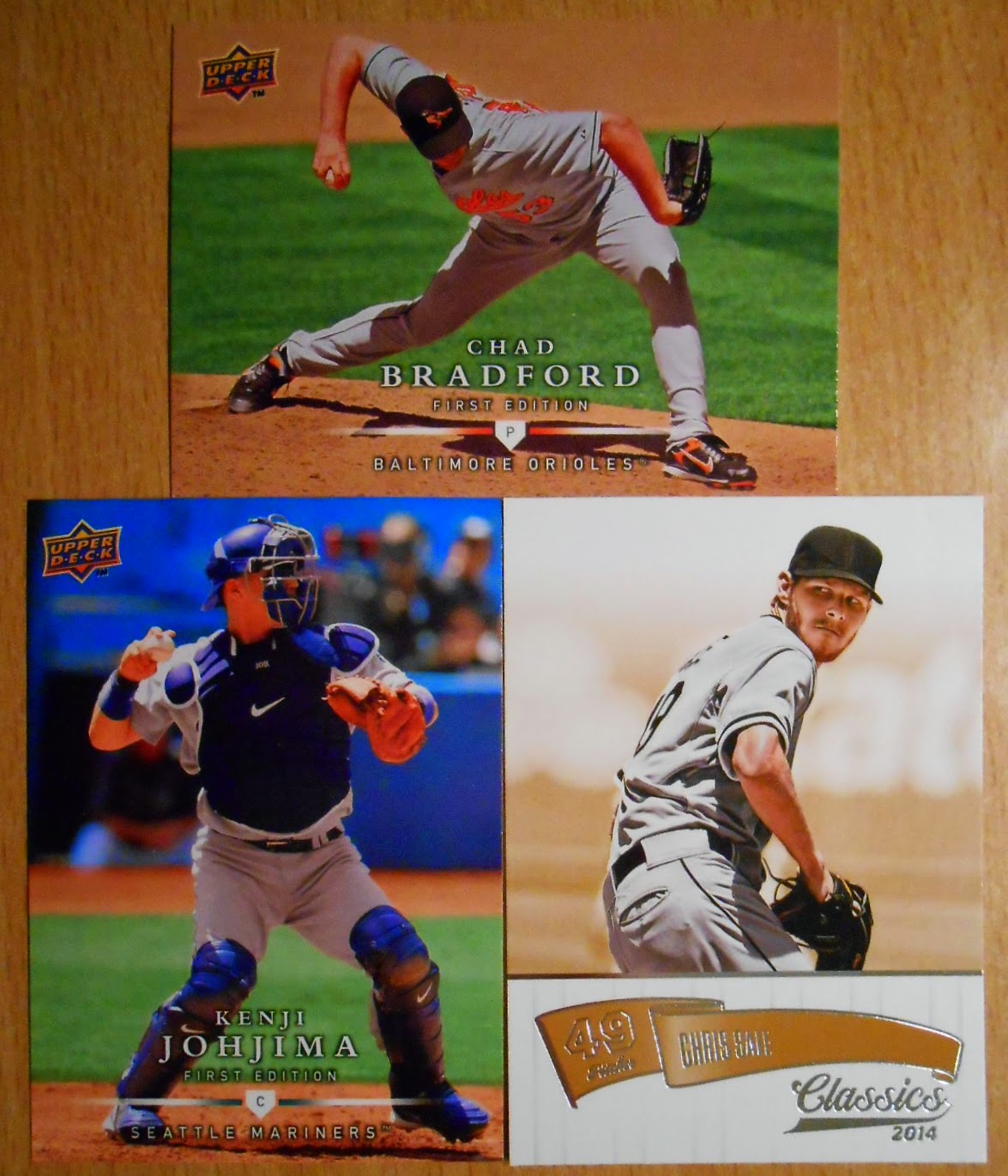 What great use of the horizontal card!  And it looks like Kenji found the ears on that baseball just fine.  I really like the photography in this Upper Deck set.  Chris Sale is captured in a pretty boring pose and it looks like he's wearing a trucker hat.  It's all tied up. 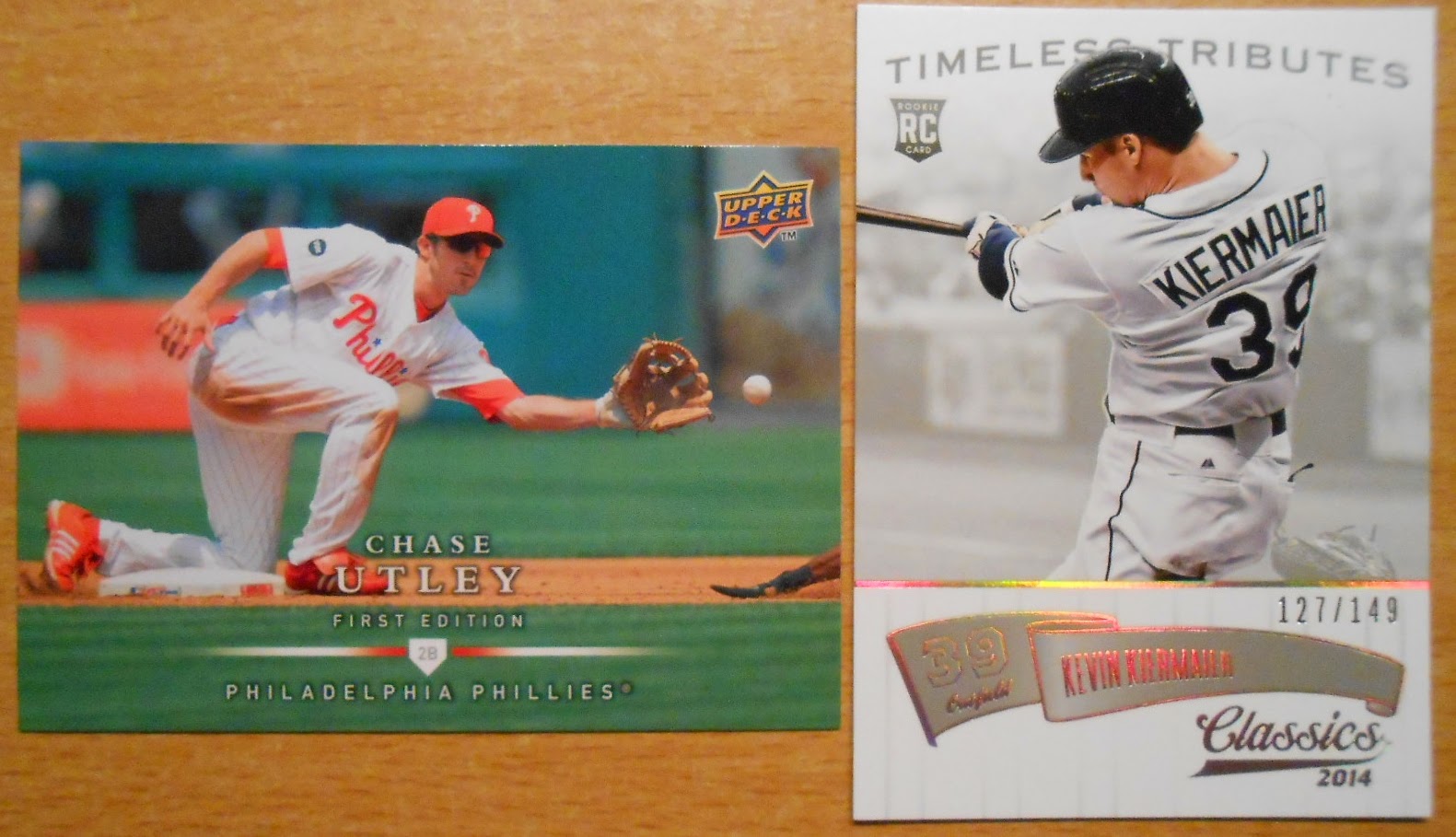 I'm not sure I understand how a rookie is a "Timeless Tribute."  The card is numbered and it's got a little bit of that refractory sheen to it, which is kind of nice.  Isn't Kevin Kiermaier one of the players who will have the rookie cup on their Topps card next year?  But again, how is a rookie timeless?  This really bothers me.
The Chase Utley card is horizontal beauty at its best.  I'm pretty certain that the baserunner runner will be tagged out, much like how I'm certain Classics is falling out of the lead. 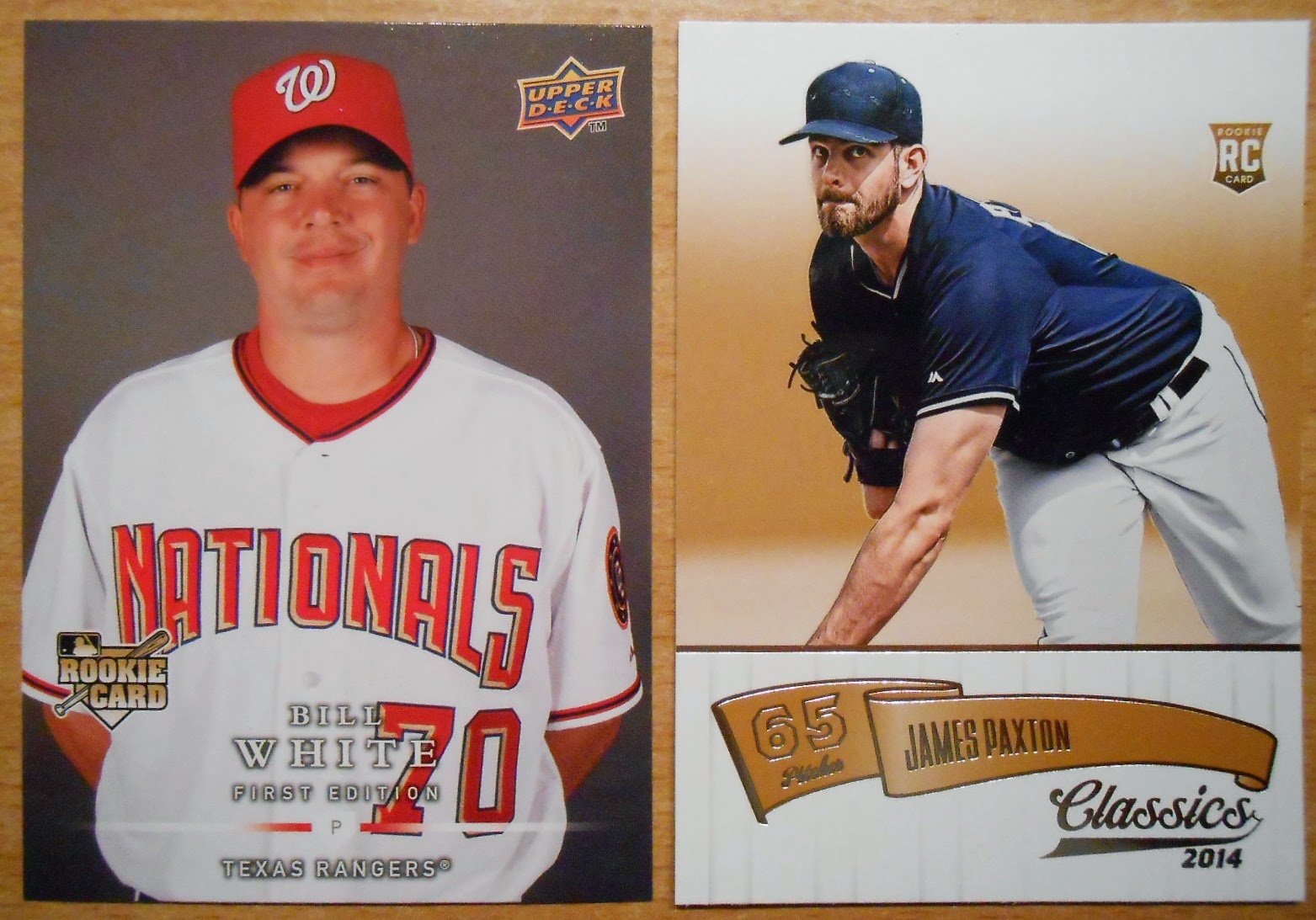 A battle of rookies!  I don't know who Bill White is and I'm too lazy to look him up.  I'm going to assume James Paxton has already had a better big league career and thus he will help Panini Classics tie this match up. 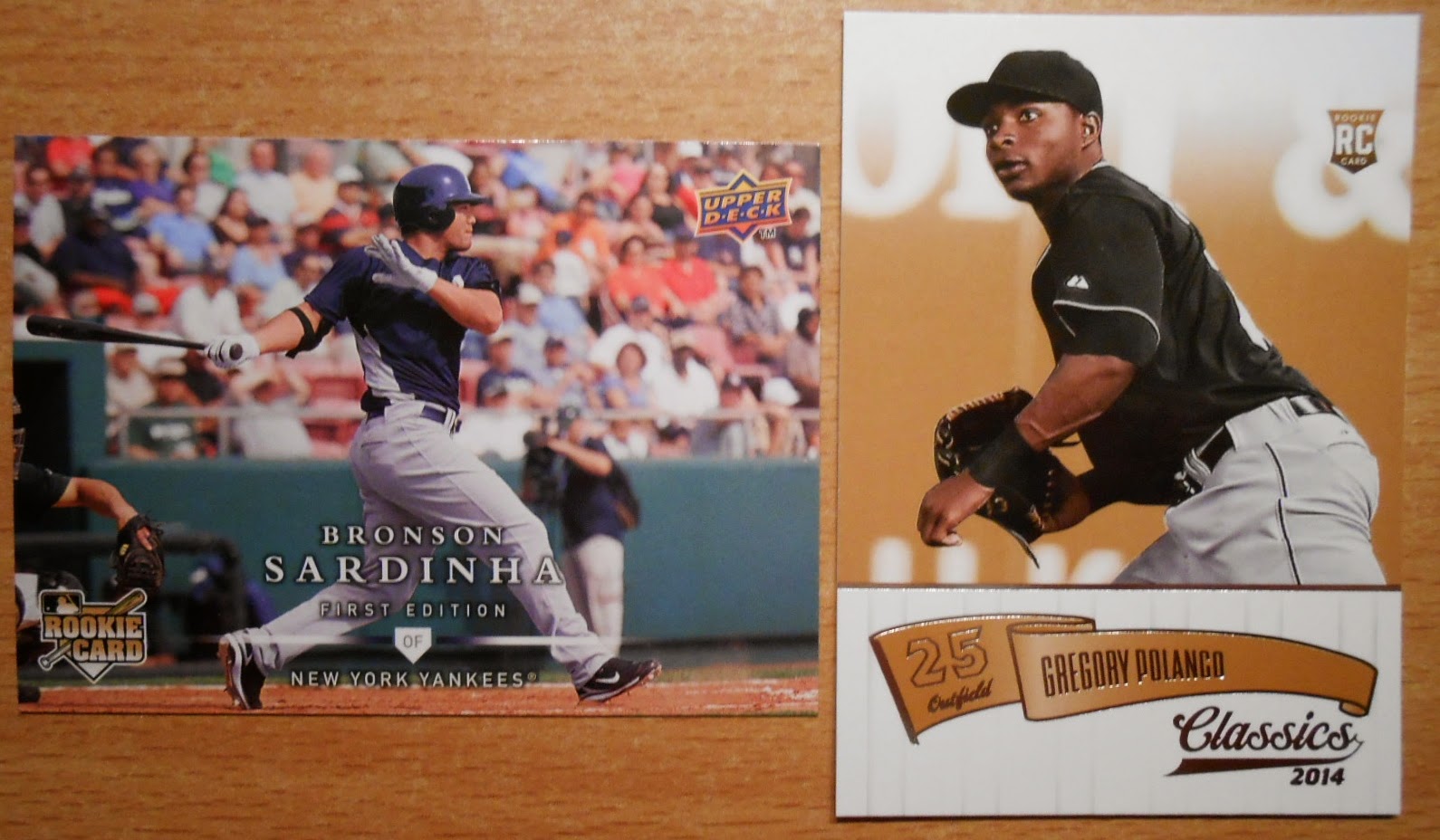 Hey, another battle of rookies!  Bronson Sardinha? I'll give the kid credit for making The Show in 2007, even with the length of his middle name weighing him down.
Okay, the Paxton/White match-up was bothering me.  SoI had to open a baseballreference.com window to see if I was correct in my assumptions. (I was; White's ERA was north of 9.00.)  Since the window as already open I looked at good ole Bronson and my jaw dropped when I saw his middle name.  Kiheimahanaomauiakeo? Wow, can you imagine learning to write your full name in kindergarten with a name like Kiheimahanaomauiakeo?
Polanco is a great prospect, but that middle name fascinates me.  I'm calling it a draw. 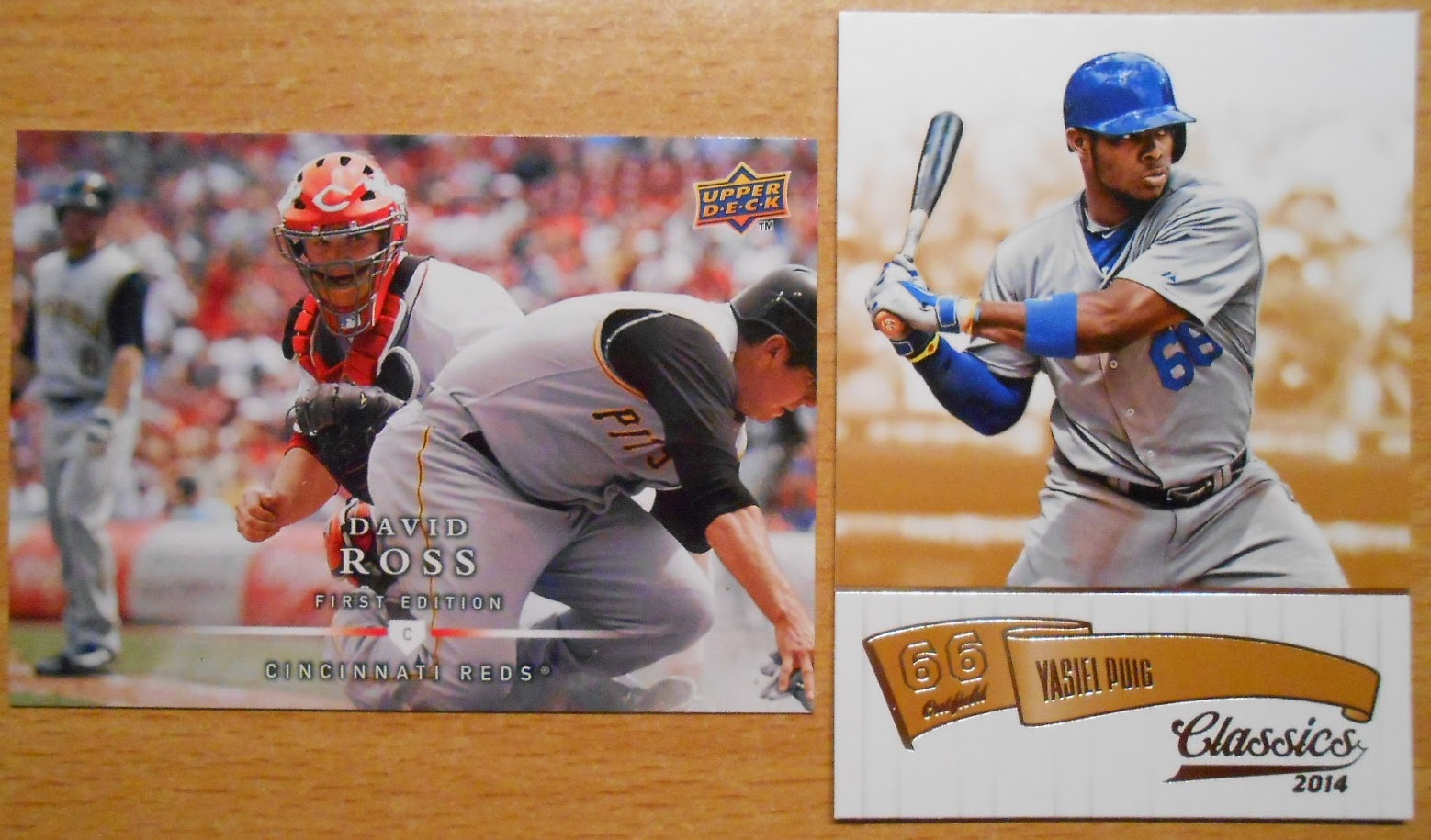 Ohhhhh...  A play at the plate versus a Puig!  Great match-up!  I guess timing is everything.  If the Cubs had signed Jon Lester by now, then they probably would have went out and snagged his catcher, David Ross.  If the Cubs had Ross, then I would have an inexplicably unwavering affection for the man and he would easily top Puig in this head-to-head...
But... No Lester, means no Ross, which means no points for Upper Deck.  Puig it is.  (Oh, and has anyone else noticed how quiet Puig's off-season has been so far?  Is he growing up a little?)

And some people think I might be insane.  Those ramblings seem totally logical to me! 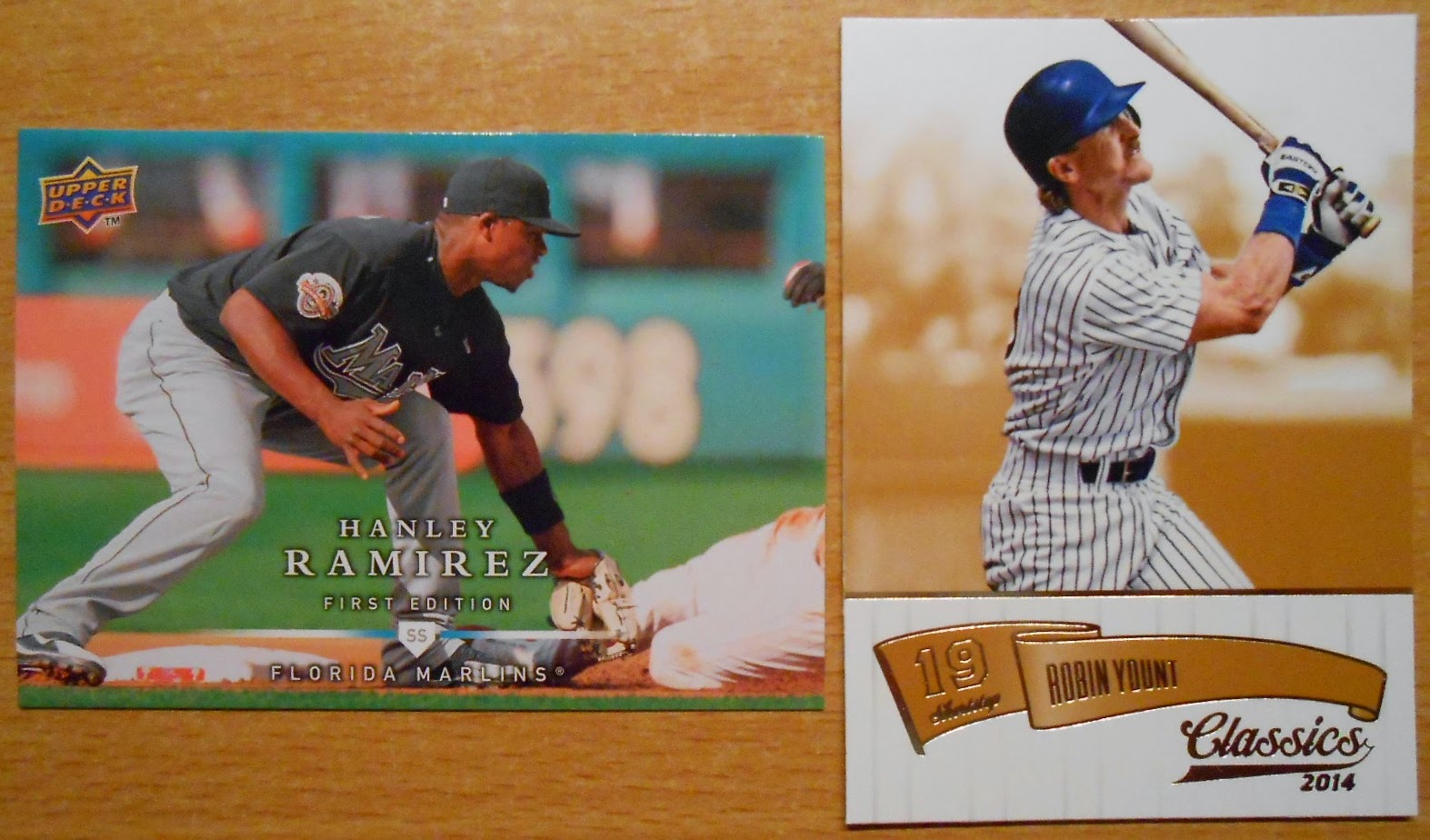 I am NOT a Hanley Ramirez fan. Boston and their deep pockets can have Hanley and the Kung Fu Panda.   Robin Yount is the type of player I wish I could fill a roster with. End of discussion. 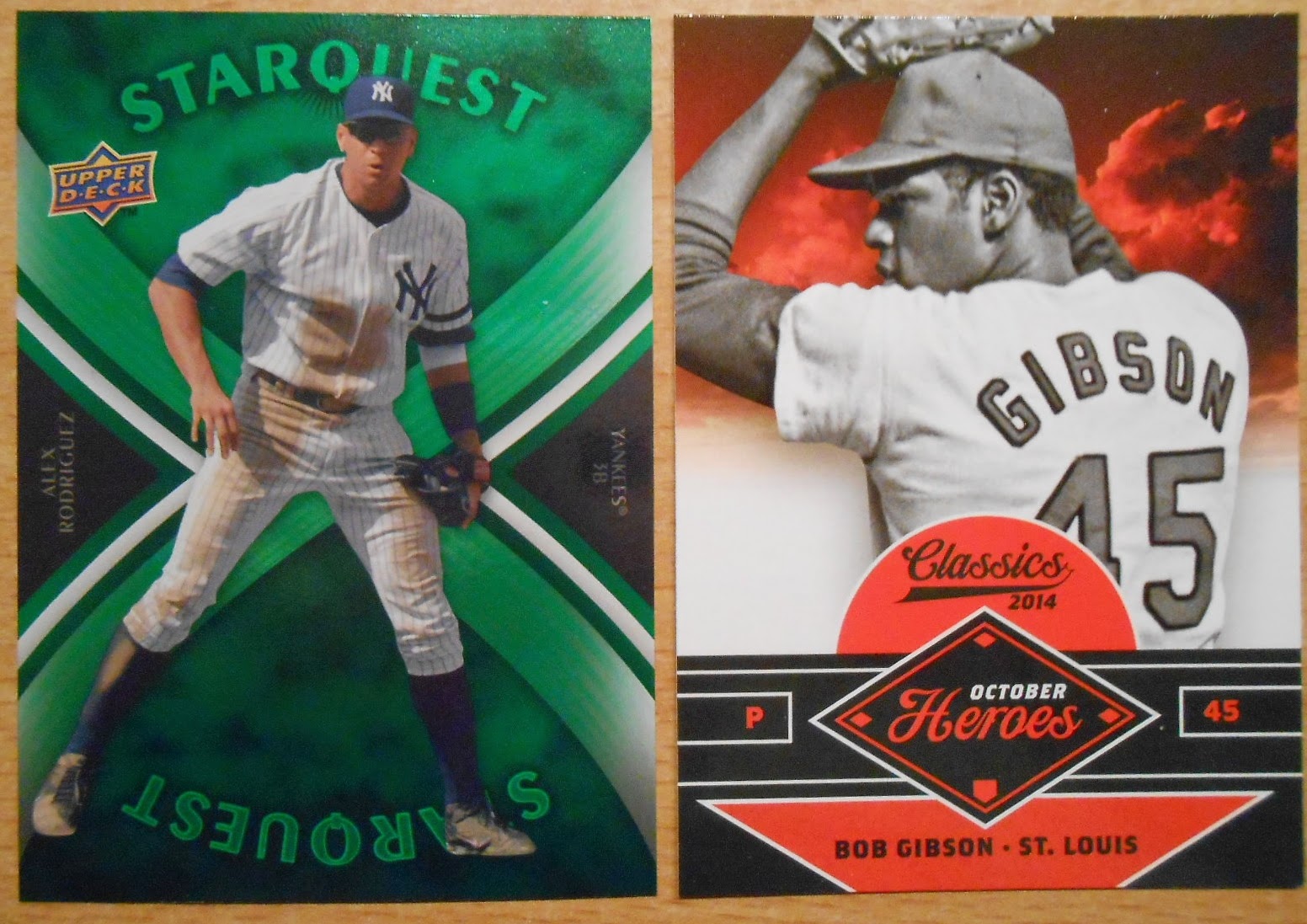 A battle of inserts...  Bob Gibson was one bad dude and he definitely would have stuck one in A-Rod's ear if the two ever faced off.  Gibby all the way.  Besides, red clouds are cool, no?

It's always tough for dated product to beat out something that has just hit the shelves, so the fact that Panini Classics came out on top is no surprise. Heck, with a name like Classics, you should expect to get cards like Harper, Puig, Sale, and two hall of fame members!  How could it lose?

That's it for another edition of Pack Wars.  I have a couple more matches queued up in the photo folder and I'm sure they'll grace the pages of this blog before the new year.  Thanks for stopping by!
Posted by P-town Tom at 12/03/2014 04:31:00 PM