Interloping with the Upper Crust 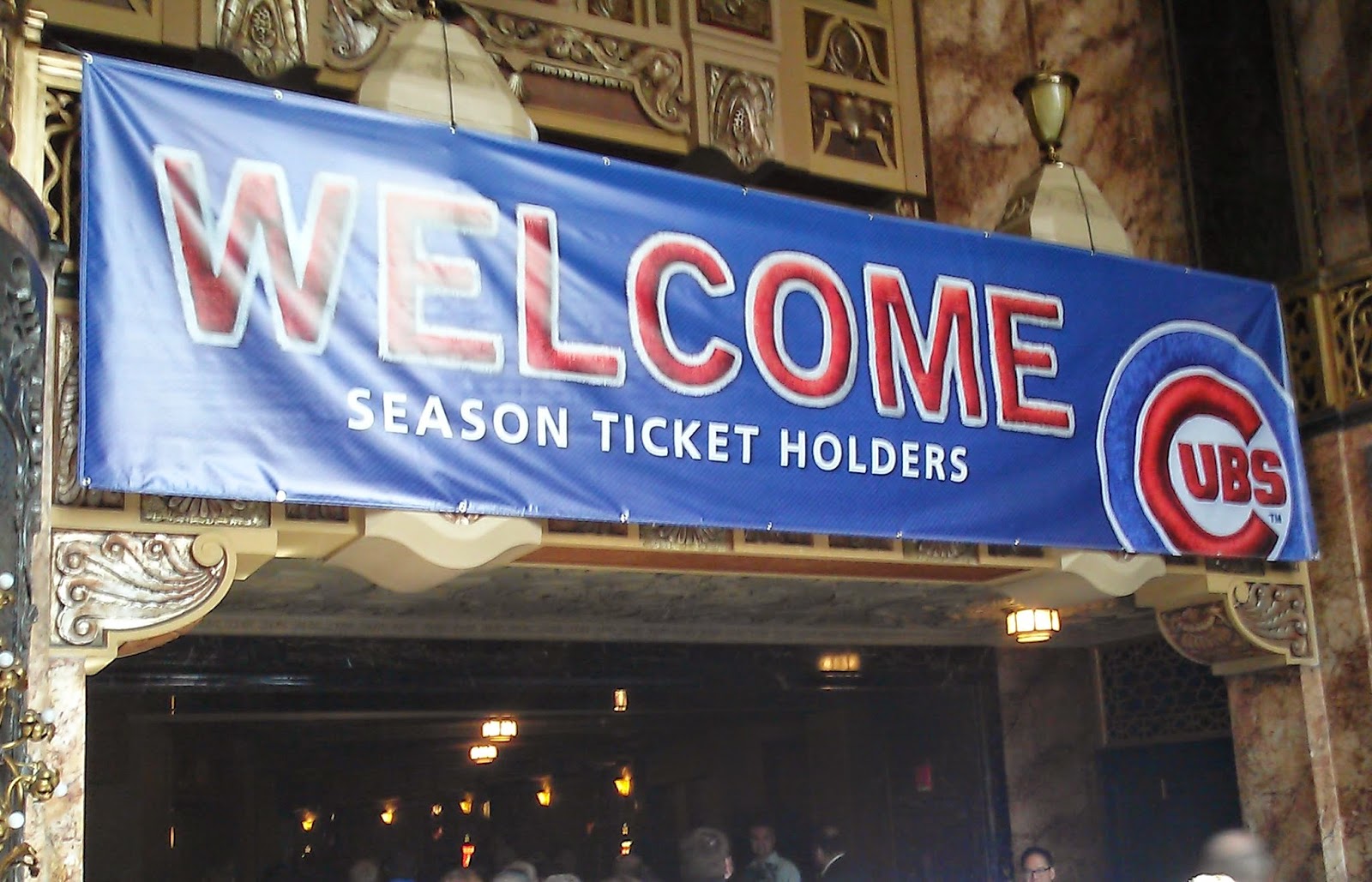 Yesterday I made the trip to Chicago with my sister, Jane, and two good friends, Vince and Craig.  We were in possession of four tickets to the season ticket holder's year end meeting known as "Cubs On Deck 2015," but none of use are season ticket holders!  (Big hat tip to my buddy Jeff for gifting us the passes!)

The meeting started at noon and was held at the Oriental Theater in the heart of downtown Chicago.  The inside of the theater was pretty plush and after we cashed in our concession coupon we settled in for the 110 minute meeting. 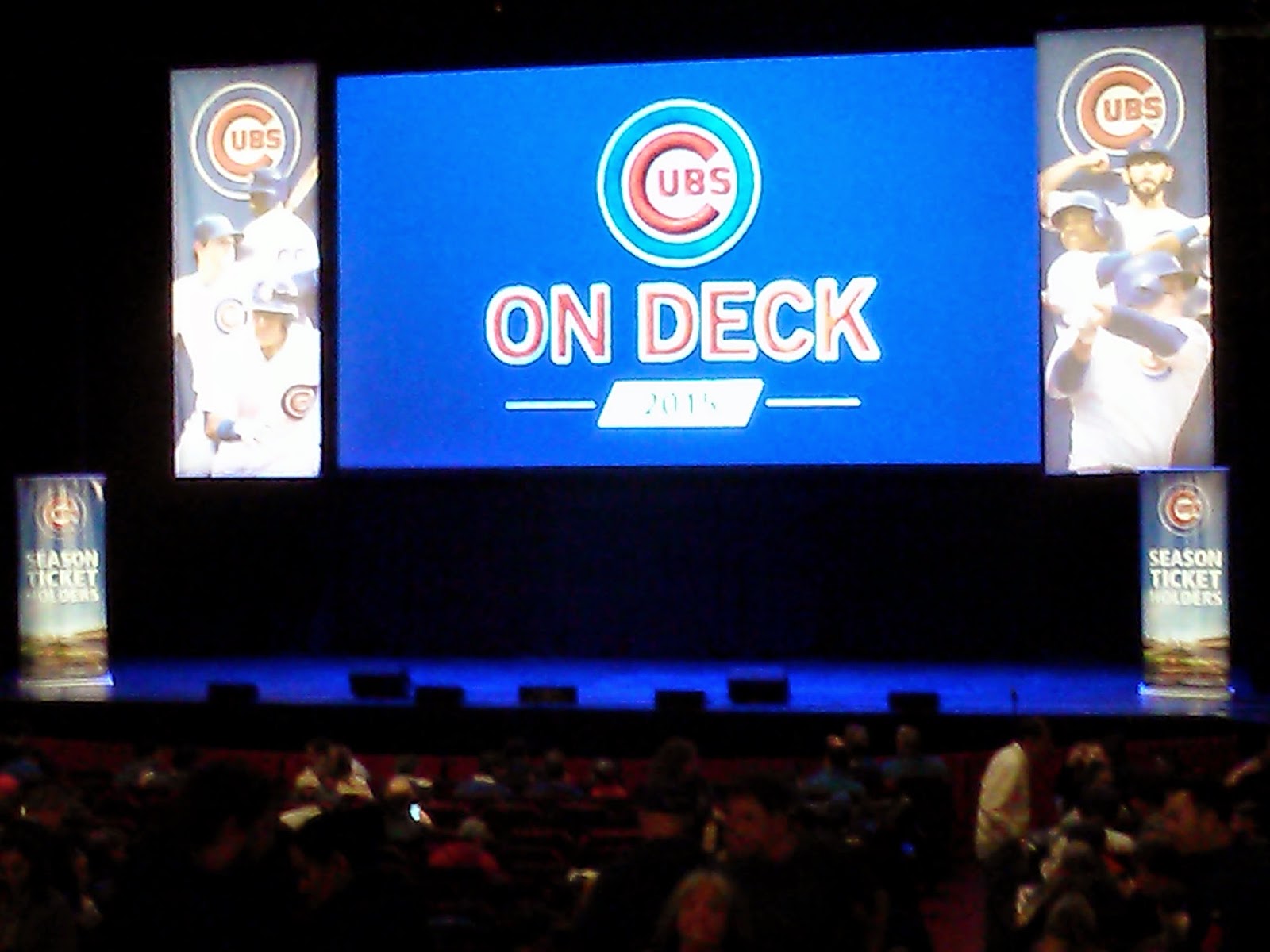 The stage featured a large video screen which was flanked by vertical banners.  On the right banner are the more established core pieces of the 2015 roster: Jake Arrieta, Starlin Castro, and Anthony Rizzo.  The left banner had three players of similar talent, but overall they are less proven to this point: Jorge Soler, Kyle Hendricks, and Javier Baez. 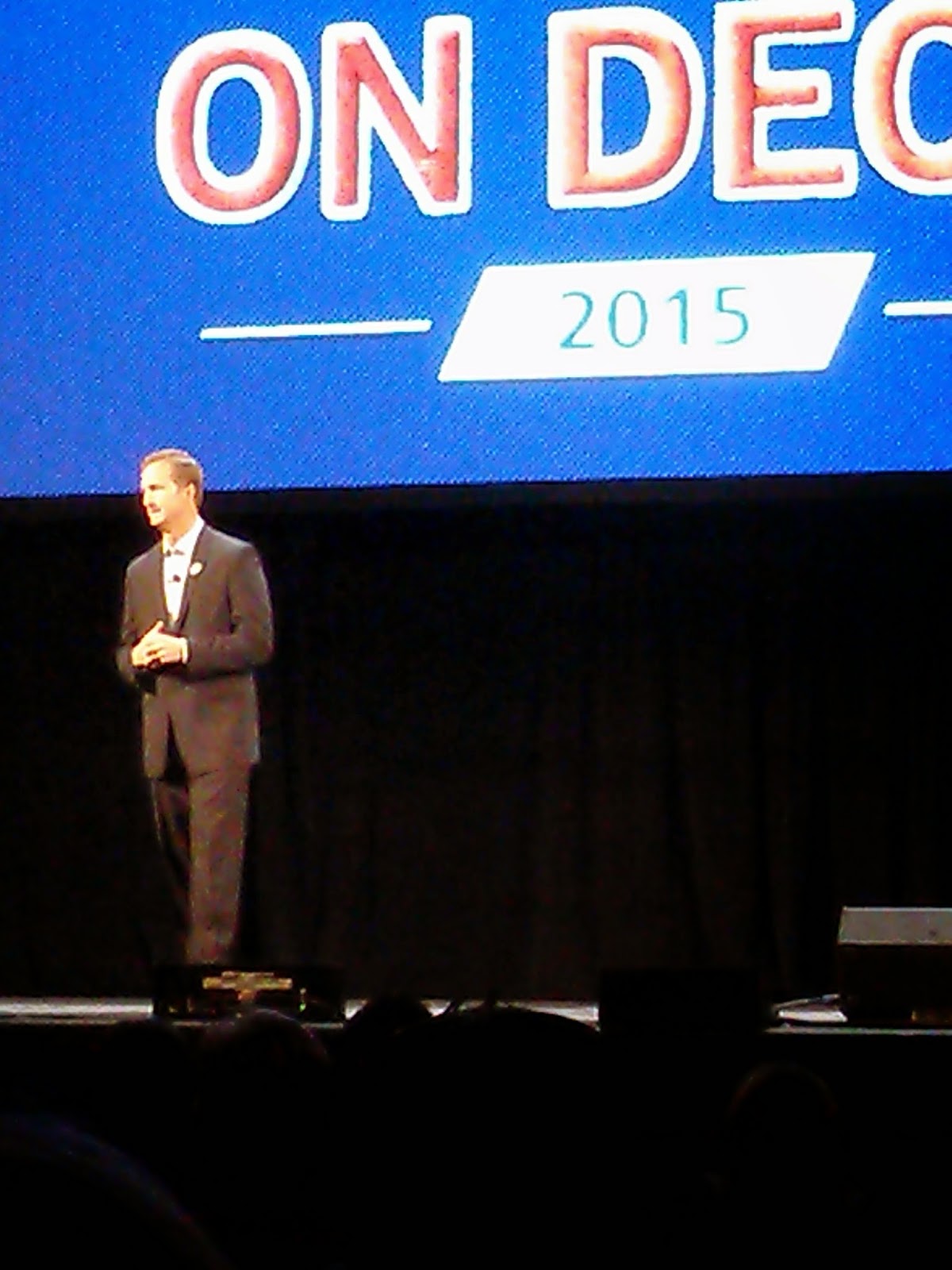 Mr. Kenney is a fine speaker, very well-educated within his position, and does a good job overall as the President of Baseball Operations.  He was unpopular within many Cubs blogging circles not so long ago, but that was mostly before Theo Epstein arrived. Since then Mr. Kenney has stuck to the business side of things and everyone I've talked to is much happier. 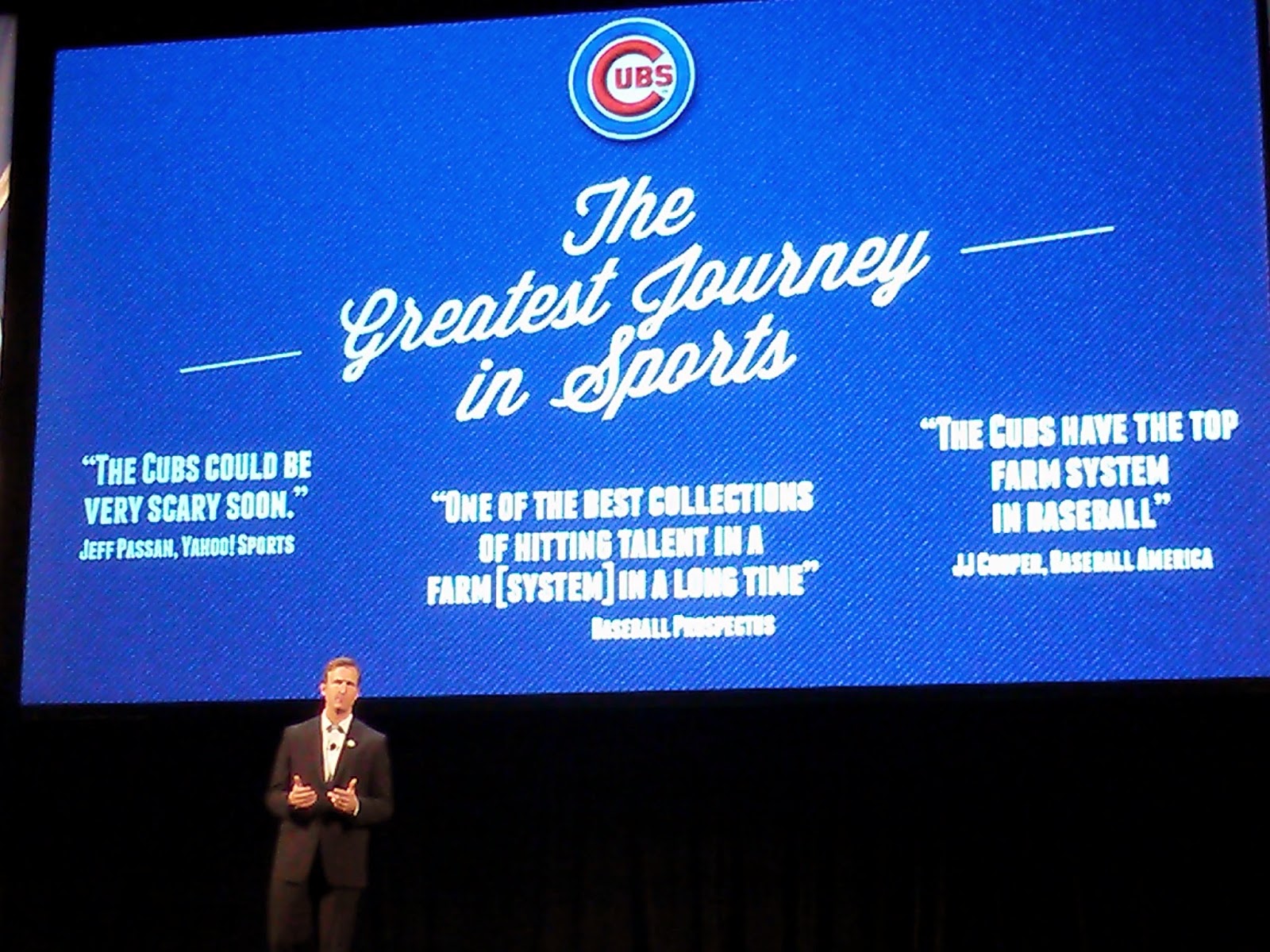 During the onset Mr. Kenney thanked the crowd, a thousand or so season ticket holders, for their patience the past few years.  Then he talked about the newer facilities in the Dominican Republic and Mesa, but he focused a large part of his time on the Wrigley renovation project and the upcoming television and radio broadcasting situations.  Lastly, he spoke to the gluttonous supply of prospects the system has.   I guess I can't blame him for briefly crossing the line between business and baseball operations in this case. 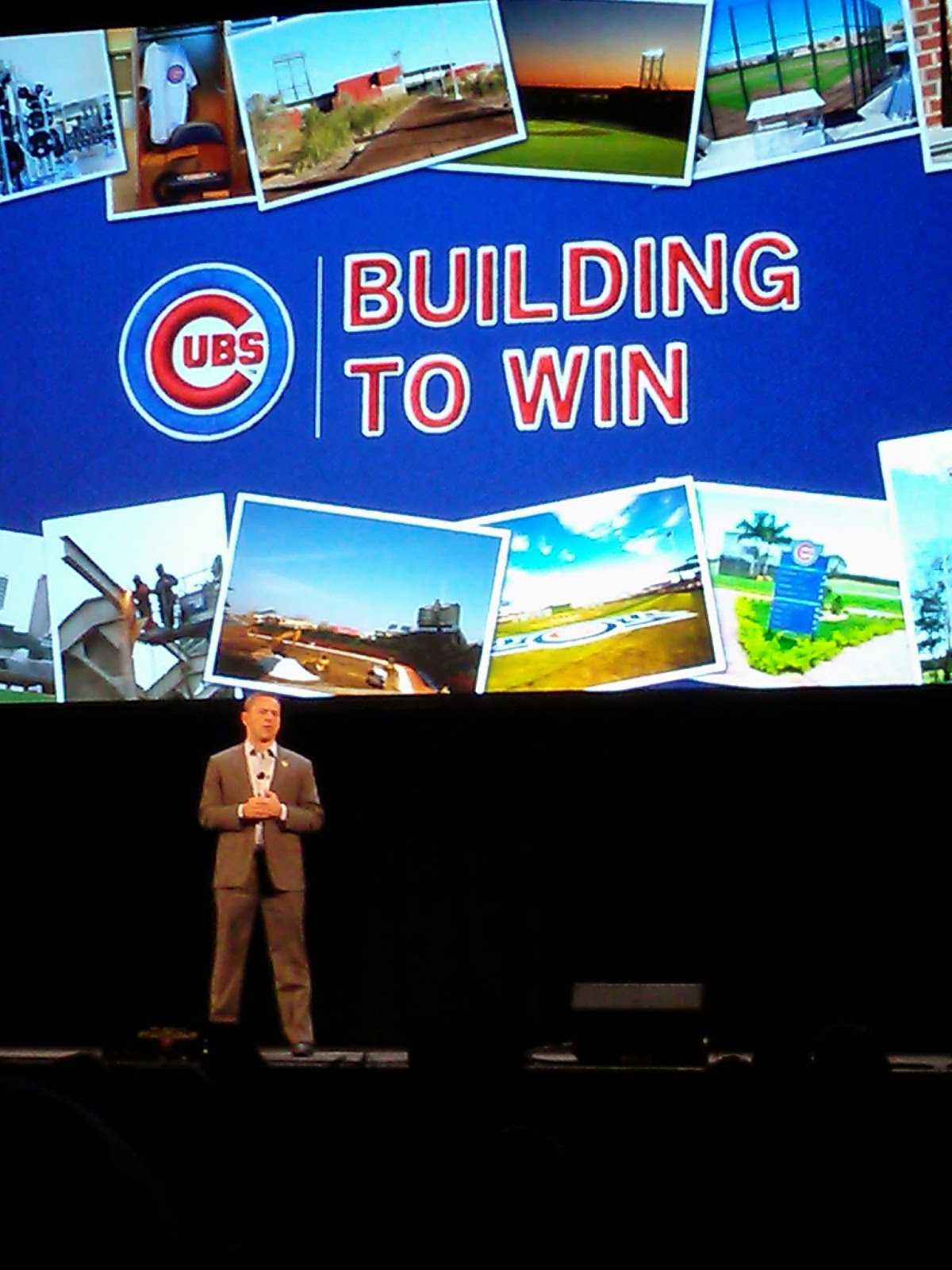 Crane Kenney gave way to Jed Hoyer, the general manager of the Chicago Cubs, and Jed talked at length about the roster.  I wish there would have been some graphics thrown up on the screen during his talk, because as an overly educated Cubs fan I got a little bored with his breakdown.  There were times I think I could have written his speech for him.

I guess I would be a remiss in summarizing my day if I didn't mention how disappointed I was that Theo didn't show.  Jed seemed uncomfortable on the stage at times and he's not quite the public speaker that Theo or Crane Kenney are.  {Translation: I have a man crush on Theo Epstein and was really bummed he wasn't in attendance.} 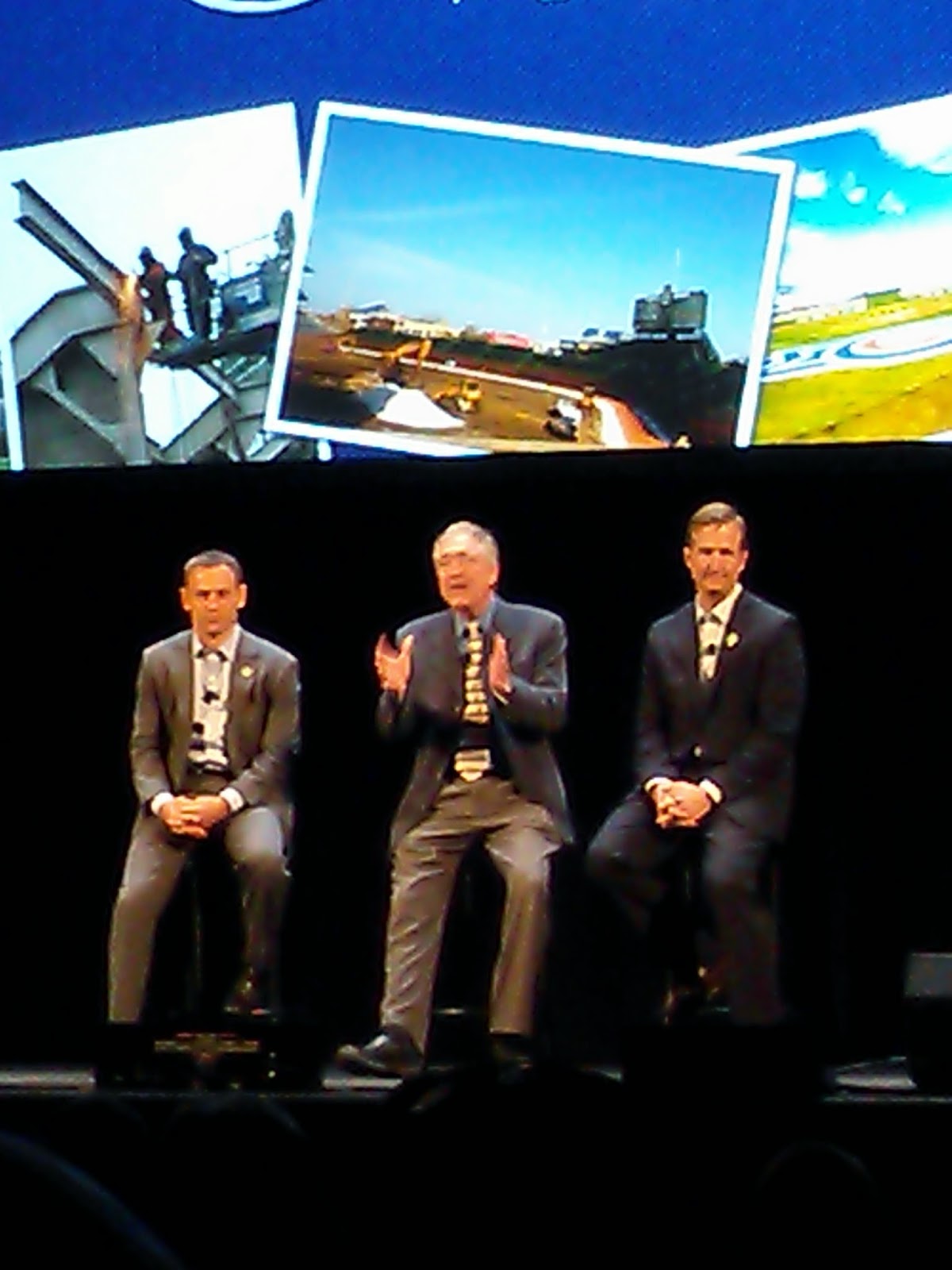 The legendary Pat Hughes led the question and answer session at the end of the presentation.  It was good to see Pat.  Last year Dave Otto ran the Q&A session, which was fine, but Pat Hughes is the voice of the Cubs as far as I am concerned.  After the short Q&A session we were given a parting gift and our way home.

Overall, the Cubs put on a nice show.  There was some nice pictures and videos shown on the big screen, but I felt it was more entertaining last year.  Yep, I don't have season tickets, but I've now made it to two consecutive meetings or the season ticket holder crowd.

We didn't eat on the way up to Chicago and were pretty hungry by the end of the meeting.  Jane, Vince, Craig and I hit Portillo's on the way home and let's just say the car windows had to be rolled down more than a couple times on the way home.  Oh...  road trips with friends... it really doesn't get much better!  Thanks again for the tickets, Jeff!