Throughout my posts most of you have probably picked up on the idea that my day job is teaching.  More specifically I'm a high school math teacher.  And not just any type of plain old math teacher, but Calculus.  I really like math and I try to help students make connections and show them why math is important.  Admittedly, I'm often a little over the top with my exuberance for my chosen subject matter and as a result I can sum up my workplace character in two words: big nerd.  I'm alright with it, because I think I reach more students this way.

When I'm off the clock I'd like to think I'm one of the coolest Cub fans south of I-80.  I follow the team and its beat reporters on Twitter, I have a couple of Apps on my phone, and I only frequent the most highly regarded Cubs related websites. I can name the next ten prospects which should have been in the running for MLB.com's Top 20 Cubs prospects. My closet contains more Cubs shirts than should be allowed for an adult, my man room is decked out in Cubs paraphernalia and my baseball card collection is largely of the boys in blue.  I'm all in!

Subconsciously, I think I'm trying to average my teaching nerdiness with my Cub-like coolness.  Perhaps then I will achieve some semblance of normalcy.  Is it working?  I don't know. You'll have to ask my wife.

Please indulge me as I attempt to use my math AND be cool all at once.  Hey, don't roll your eyes at me!

The Cubs just wrapped up the 2014 season and for the first time since 2010 they managed to avoid a ninety loss season.   When Theo Epstein was hired in the fall of 2011 he did not proclaim a quick fix.  Instead he stressed patience to the fan base, because his vision was a major overhaul of the franchise from the front office down to the lowest level of the minors.

"Progress is not linear," is one of Theo's most famous quotes.  I'm on board with that.  In fact, here's a quick line graph, which plots the win totals for the last seven seasons.

Theo, how about parabolic?  The dashed red line is the best line of fit for a quadratic function.  The 2012 win total (61) was a little low for the vertex of my plotted parabola, but otherwise it fits nicely.

In 2008 the Cubs had a record of 97 wins and 64 losses, but they were swept out of the playoffs in the first round by the Los Angeles Dodgers of Los Angeles.  Everyone you'll talk to will say that team was too right-handed.  Sure, they had only one full-time player who batted from the left-handed batter's box (my boy, Kosuke Fukudome), but there was another fact that stood out to me: this was an older team.  Six of the eight position players were already in their thirties and the average age of all the hitters on the roster was 30.1 years.

Let's take a look at the position player age by year in graph form.  30.1 in 2008.  Wow.  Theo and Jed Hoyer have done some serious house keeping! Remember, they took over after the 2011 season.

This year's 26.8 is the lowest since 1966, which was 26.6.  The 1966 team featured younger players such as Don Kessinger, Randy Hundley, Glenn Beckert, Ron Santo and Billy Williams.  In that group you have five All-Stars and two Hall of Fame members.  The 1966 team also had a guy by name of Ernie Banks in its lineup, but for the most part they were young and inexperienced and finished the season with a record of 59 wins and 103 losses.

In comparison, with the way the roster is assembled right now, the lineup for the 2015 Cubs would look something like this: 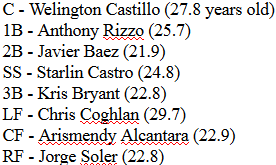 I know, I know.  Kris Bryant won't come up until the middle of May and Coghlan may be replaced by a free agent. And who's to say Baez doesn't start in AAA?  The dude strikes out a ton.   Okay.  Fine, but that lineup is talented, cost controlled, and young.  Young to the tune of an average of 24.8 years old.   I realize I'm comparing a possible starting lineup of eight players against the average of all of the batters from the 2014 version of the Cubs.  No matter, Theo's vision is coming to fruition and we'll have some young, exciting talent on the major league roster next year.

The best thing?  I think the Cubs have already bottomed out.  That's right, the win parabola is trending upwards!  The aforementioned 1966 team went 59 and 103, and the 1967 team showed a little moxy the next season and improved to the tune of 87 and 74.  That's quite a turn around!

What does 87 wins get you these days?  The 2006 Cardinals won the World Series, but only managed 83 wins during the regular season.  2014?  Three of the wild card teams this season won 88 games.

In summary, I'm generalizing quite a bit and I understand there's more to the game of baseball than hitting, but the numbers look pretty good.  The Cubs improved by seven games over their season record in 2013 (66 and 96) to register a record of 73 an 89 in 2014, and I don't think it would be too much to ask to for another seven or eight wins of improvement in 2015.  A 0.500 record would be exciting considering where the team has been in recent years.  And who knows, a couple of shrewd acquisitions during the off season may net a veteran or two who can infuse some leadership and whip the young pups into shape quicker than expected.

Regardless, this cool baseball loving math nerd is ready to fast forward to Opening Day 2015.   Besides, winters are so overrated.