Pack Wars, brought to you by our sponsor...

Zippy Zappy!  I haven't done a Pack Wars in quite some time, mostly because of my recent self-imposed collecting hiatus.  Yet, there was a special little surprise in the mailbox yesterday from Cervin' Up Cards which means I've been Zippy Zapped!

Getting "zapped" sounds kind of painful, but for the uninitiated I can assure you it is an altogether delightful experience.

Let's introduce the competitors in this edition of Pack Wars!

First, we have the suspiciously thick pack of 2013 Topps Update which comes in a purported 8 cards.  Hmmm... I have my doubts about that. 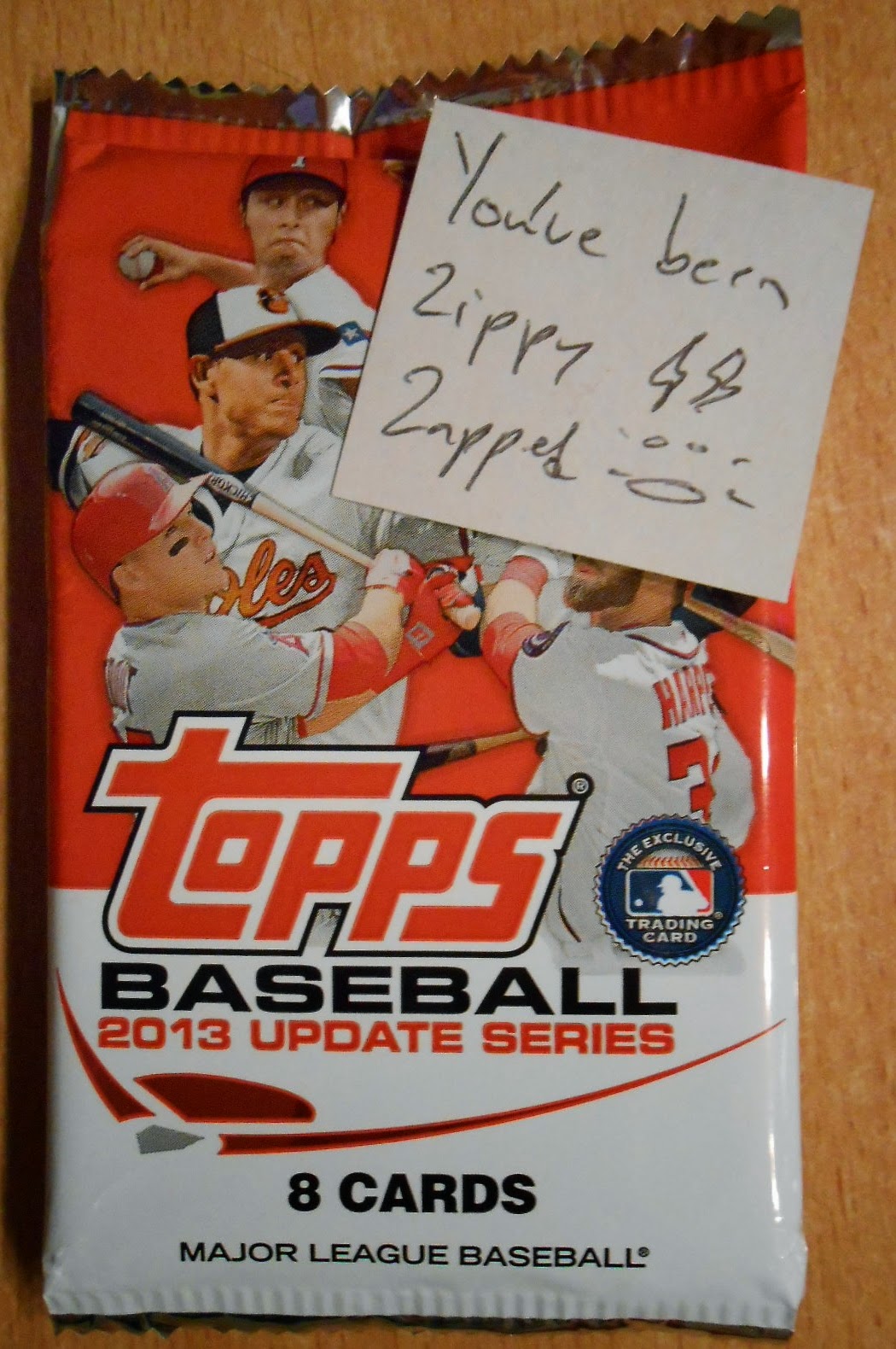 In the other corner we have a tag team effort in the form of a 5 card pack of 2007 Fleer Ultra and a 10 card pack of 2008 Upper Deck First Edition Update.   These bad boys came from a repack that's been collecting dust underneath my desk. 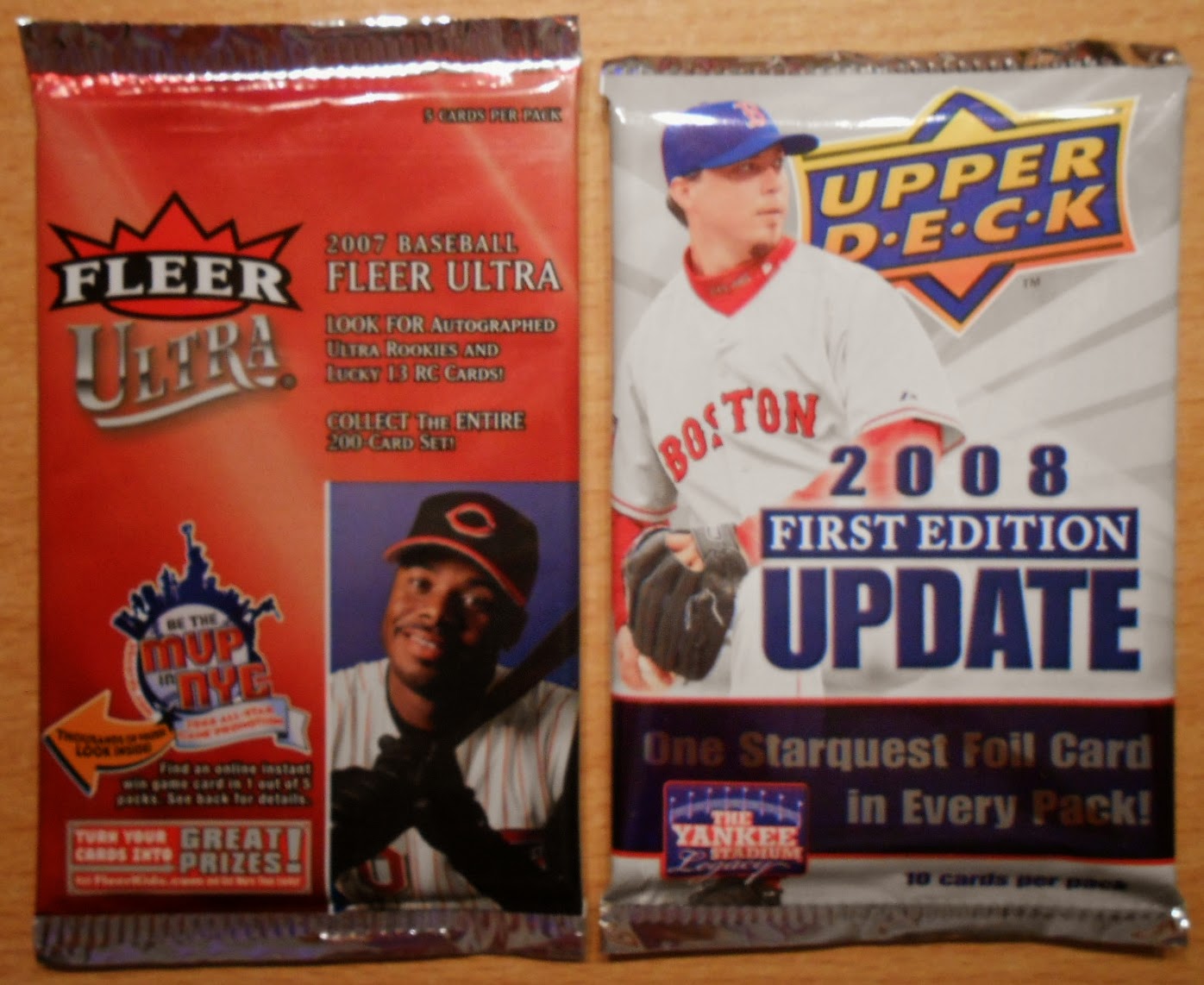 Two versus one?  I don't think Zippy Zappy's pack is going to have any trouble fending off the twosome.  Let's get to the cards and see for ourselves! 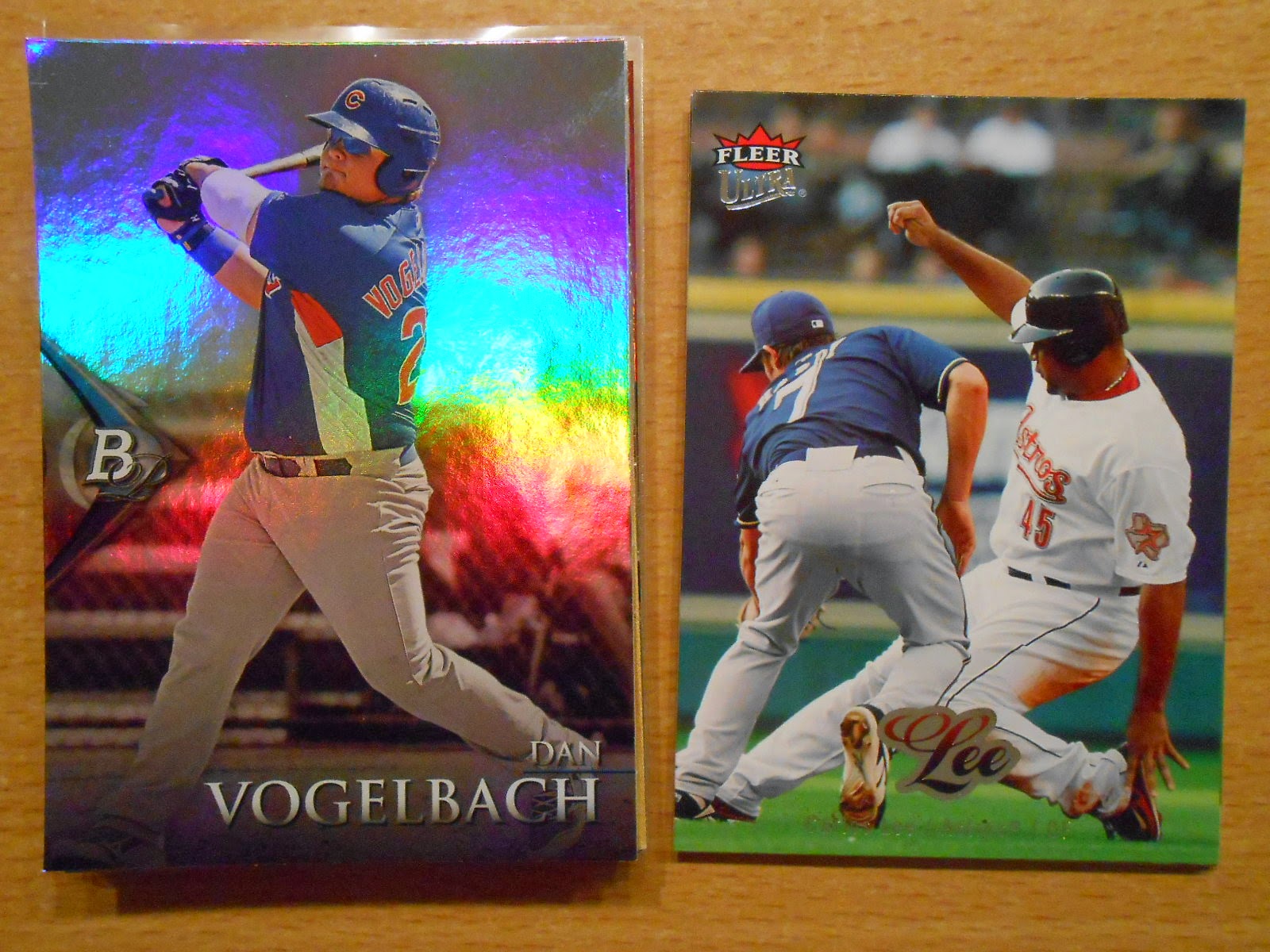 The Vogelmonster against a nice action shot of Carlos trying to be a baserunner. Nice try, Carlos, but you aren't fooling anyone.  Zippy Zappy scores first with one of my two favorite minor league players! 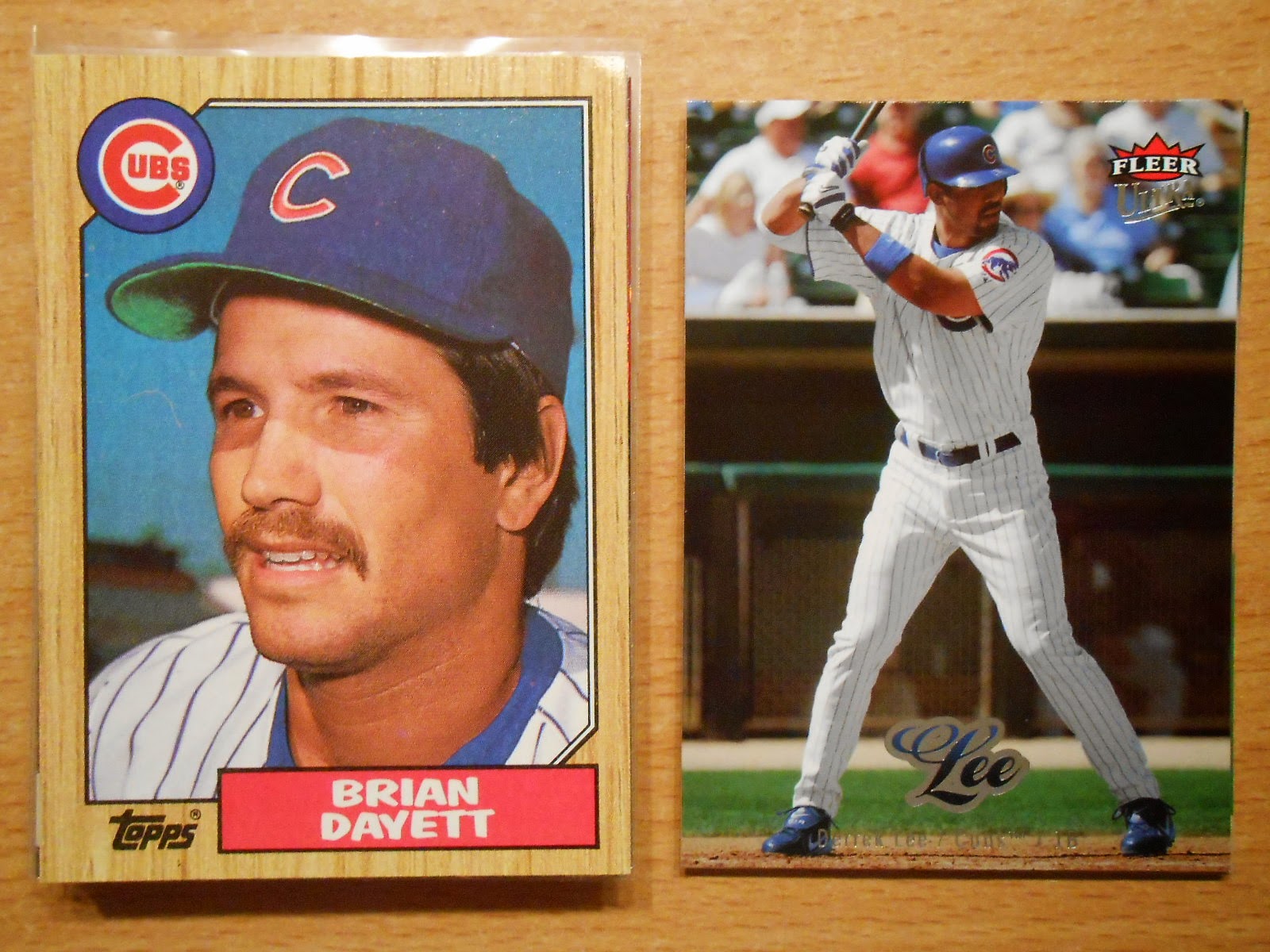 Ooooooh...  Here's one I didn't see coming.  Something like my ninth '87 Briant Dayett versus a DLee card.  No contest here.  DLee jacks one and ties up the match. 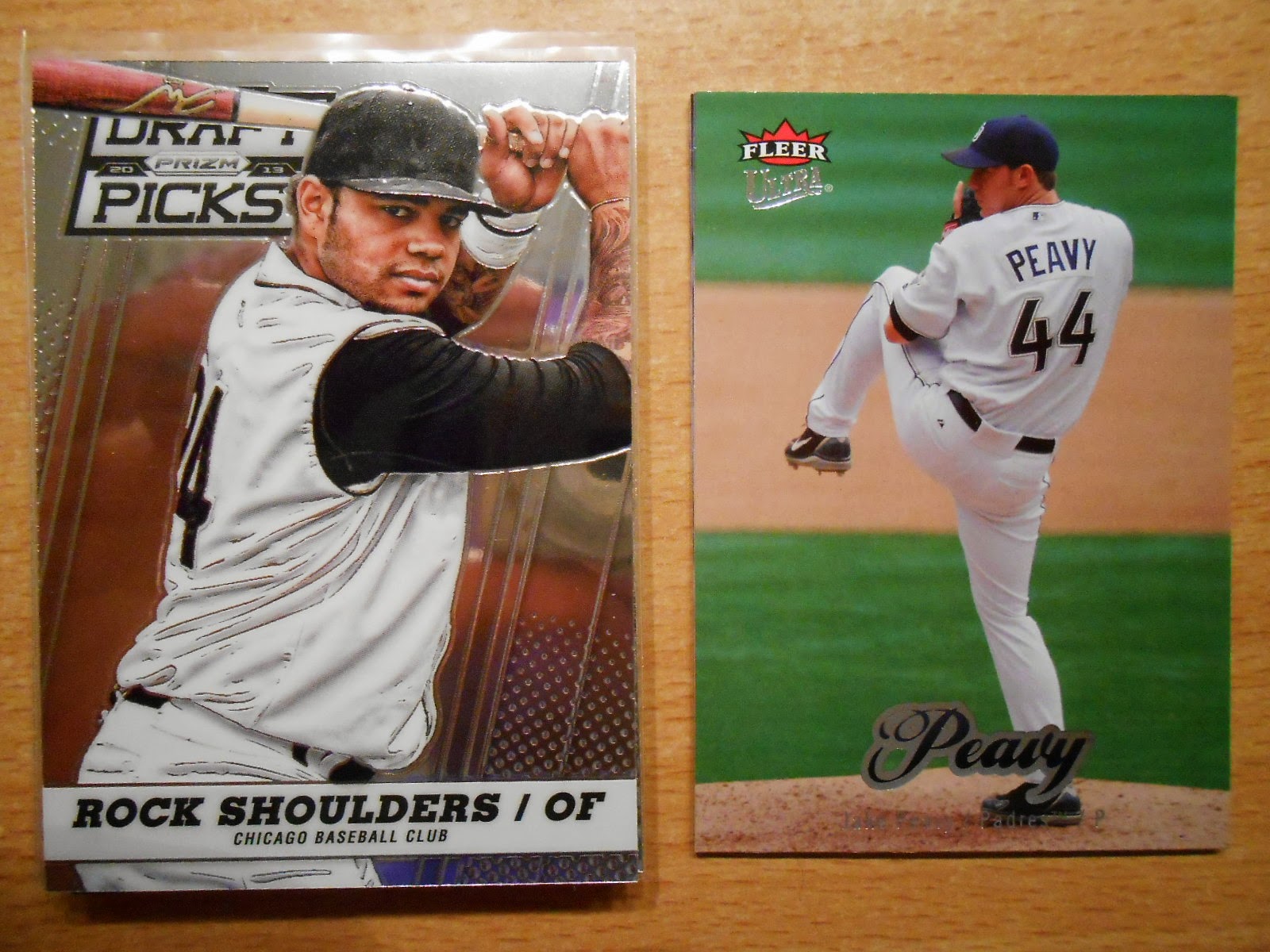 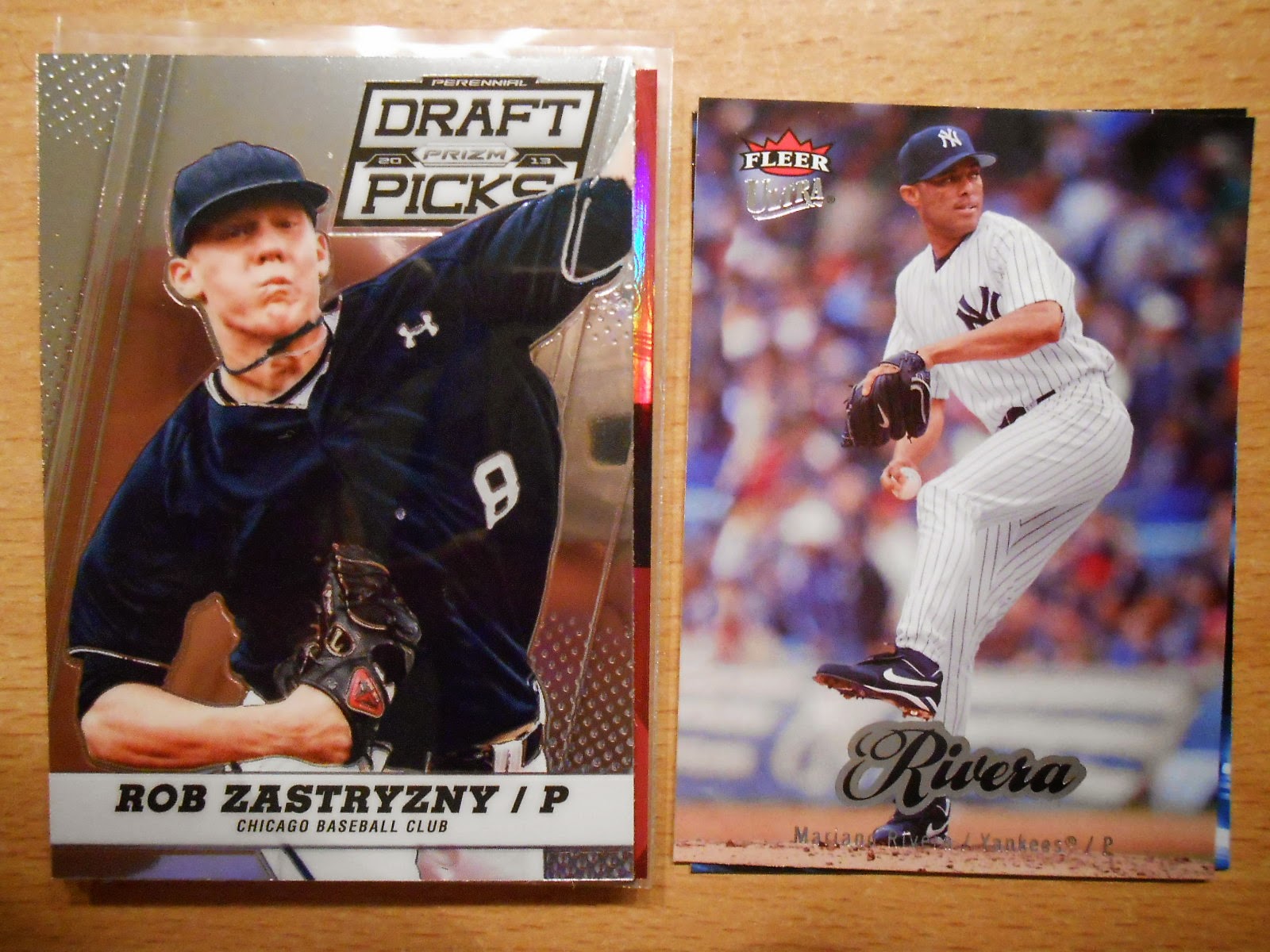 The Z-man and a Mariano Rivera card.  This is a tough call for sure. Rob Zastryzny was a pretty high draft pick from 2013 and this is my first card of his.  Rivera is the best closer of ALL-TIME.  Yet, I love my Cubs prospects, almost as much as Zippy Zappy loves his Yankee farmhands.

In a hypothetical battle, would the Zipster take a LUIS TORRENS card over a Ryne Sandberg?  I think he would, thus I have to qualms about choosing the Z-man in this one.  Yes, I'm a homer, but it's my first Zastryzny card! 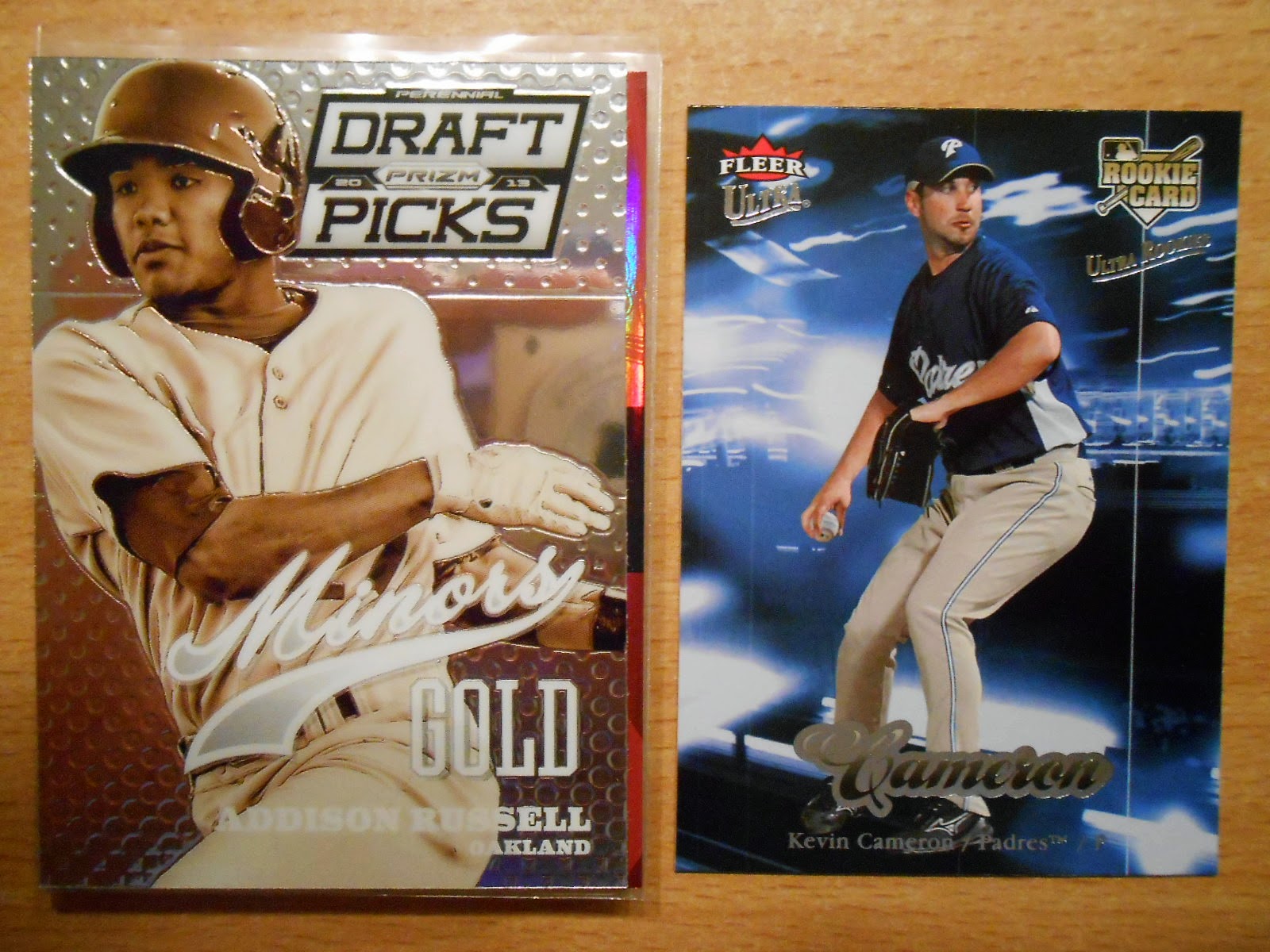 Here's a case where I don't mind the lack of logos on the card.  Having a big A's logo on the helmet of Addison Russell would just ruin this card for me, but no license means no logo.  Which means I'm pretty happy adding a "Gold" Russell to my collection.  By the way, who is Kevin Cameron? 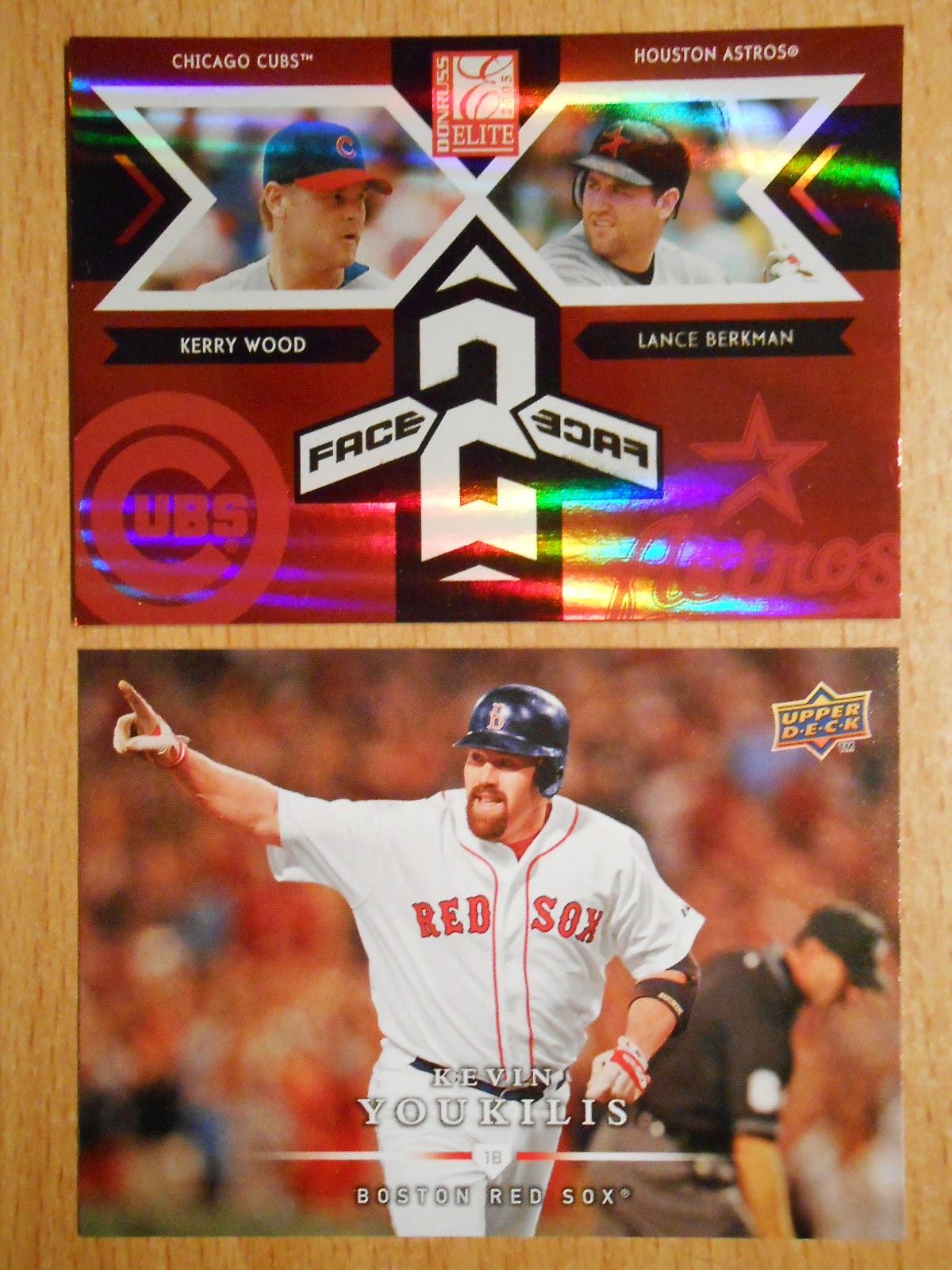 A new Kerry Wood versus a nice shot of the "Greek God of Walks."  I'm sorry Youk, but I have a KW PC.  You may think you're #1 in that picture, but in this case you're going to be the first loser.  Ouch. 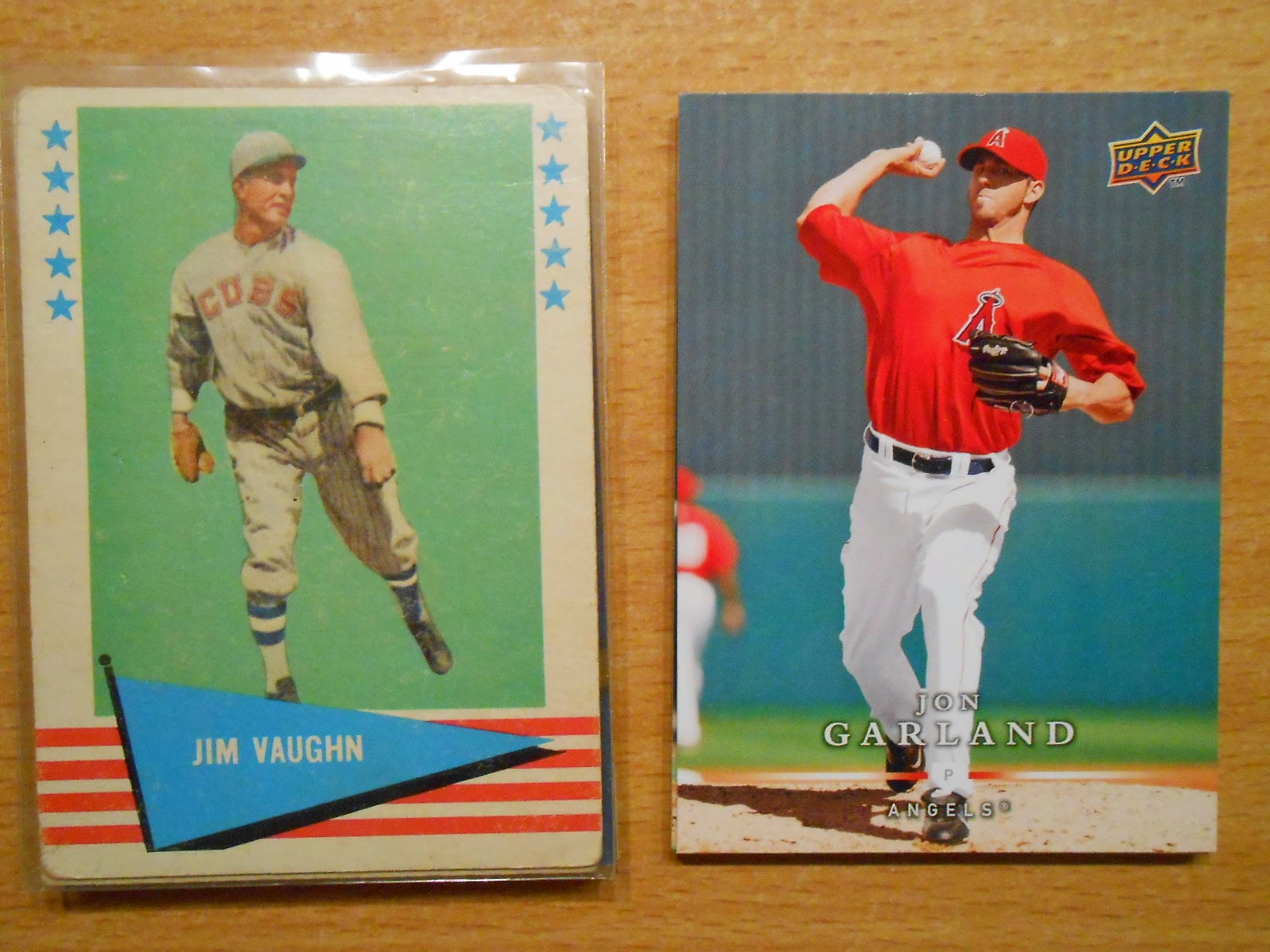 Wait, Jon Garland played for the Halos?  Craziness for sure.  I guess he did for an entire season.  Huh.  If you type in "Jim Vaughn" into baseballreference.com you aren't going to be rewarded for your efforts.  James Leslie Vaughn?  Does that ring a bell?  No?  How about Hippo Vaughn?  This dude led the league in wins, ERA, innings, shutouts, WHIP and K/9 (4.6).  4.6?  Man, baseball is so different now than what it was back in 1918.  The 1963 Fleer card wins in a landslide. 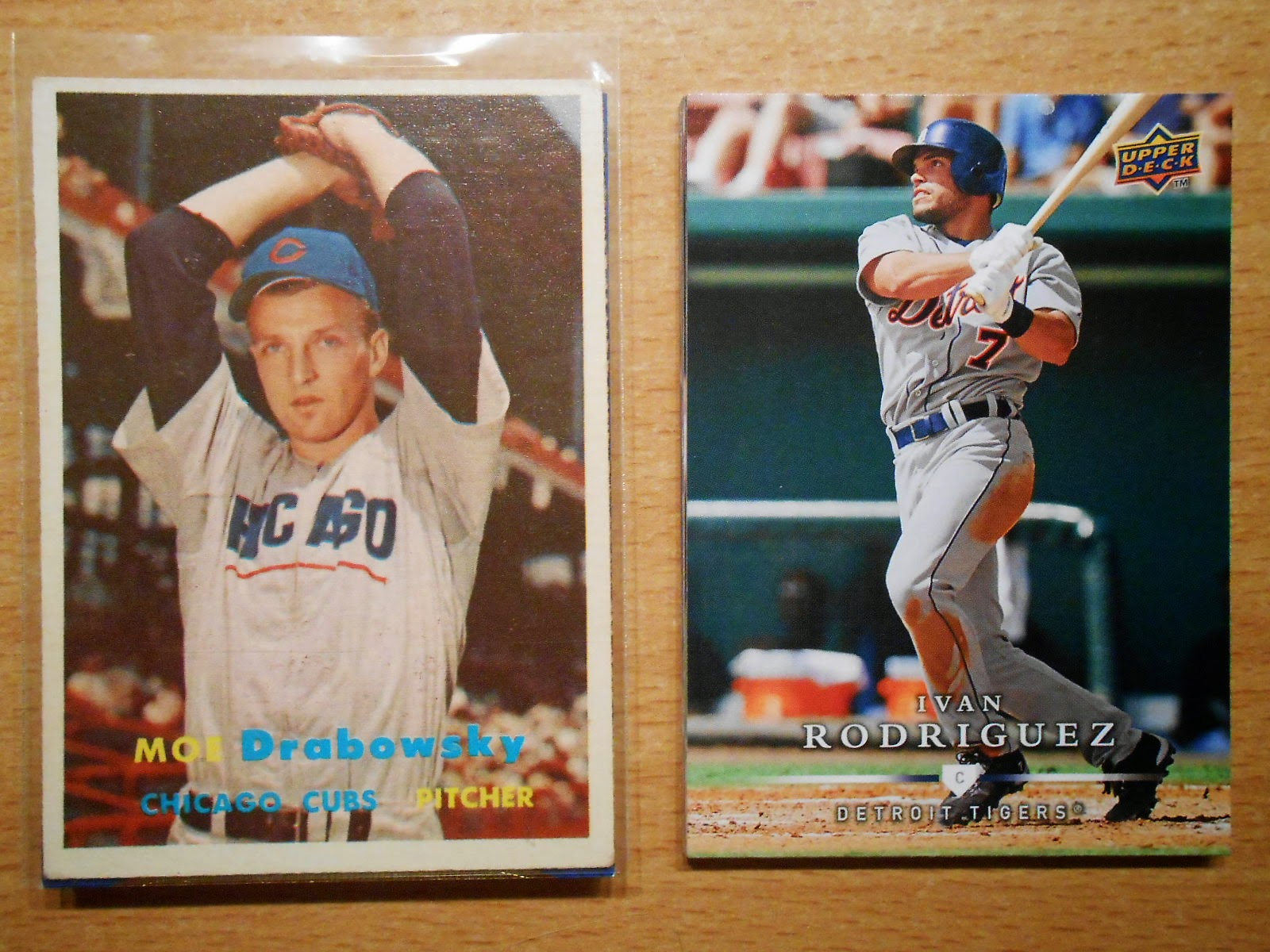 Moe Drabowsky!  Wow, this pack has been great!  My first Z-man, first Hippo, and my first Moe! A rookie card at that!  Pudge, you were a beast behind the plate and at the dish, but not even you can top a 1957 rookie of Moe Drabowsky! 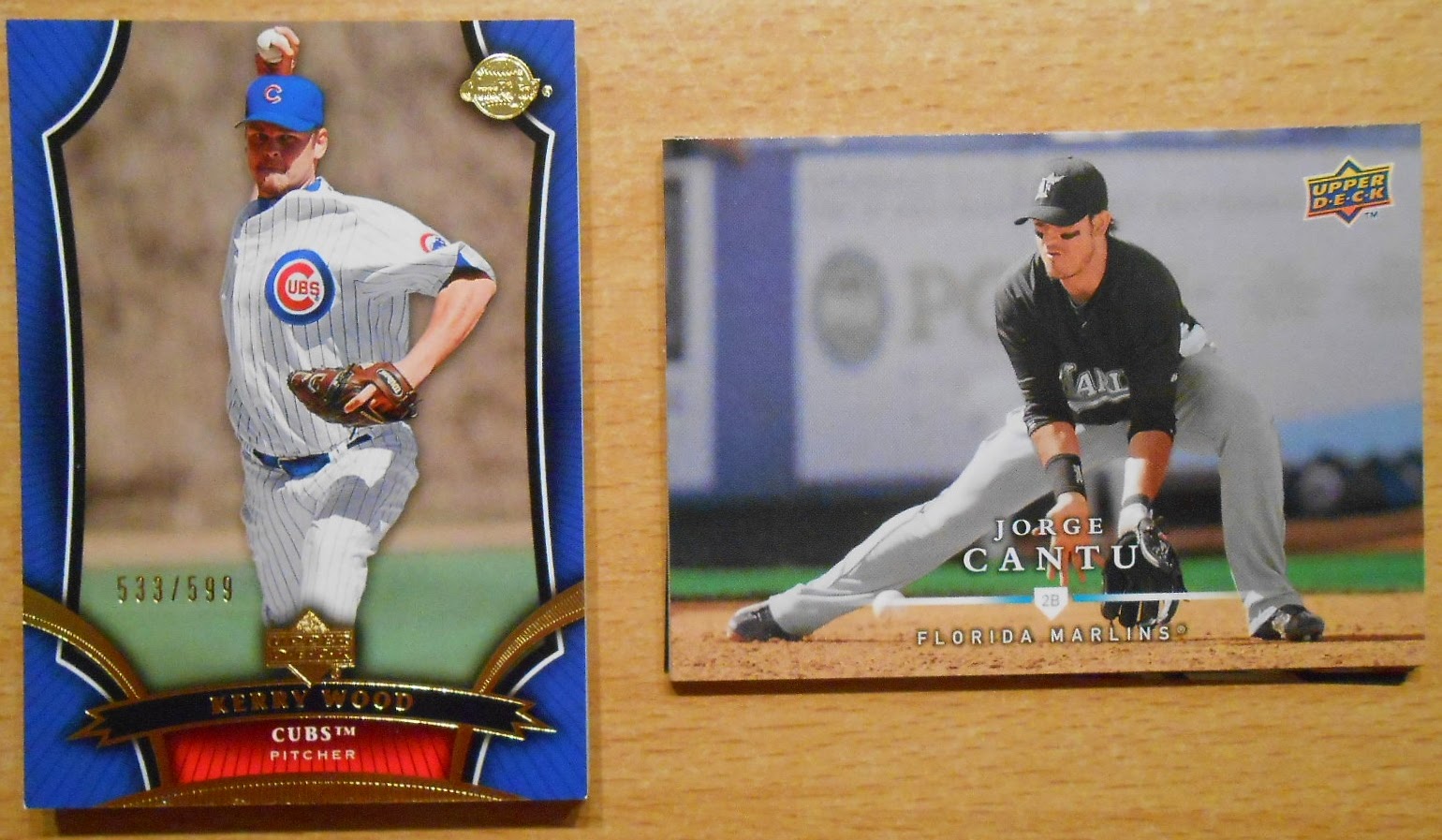 A repeat of a Kerry Wood card against a pretty nifty horizontal fielding shot of Jorge Cantu.  We'll throw the Fleer Ultra/Upper Deck team a bone here and give them a pity point. 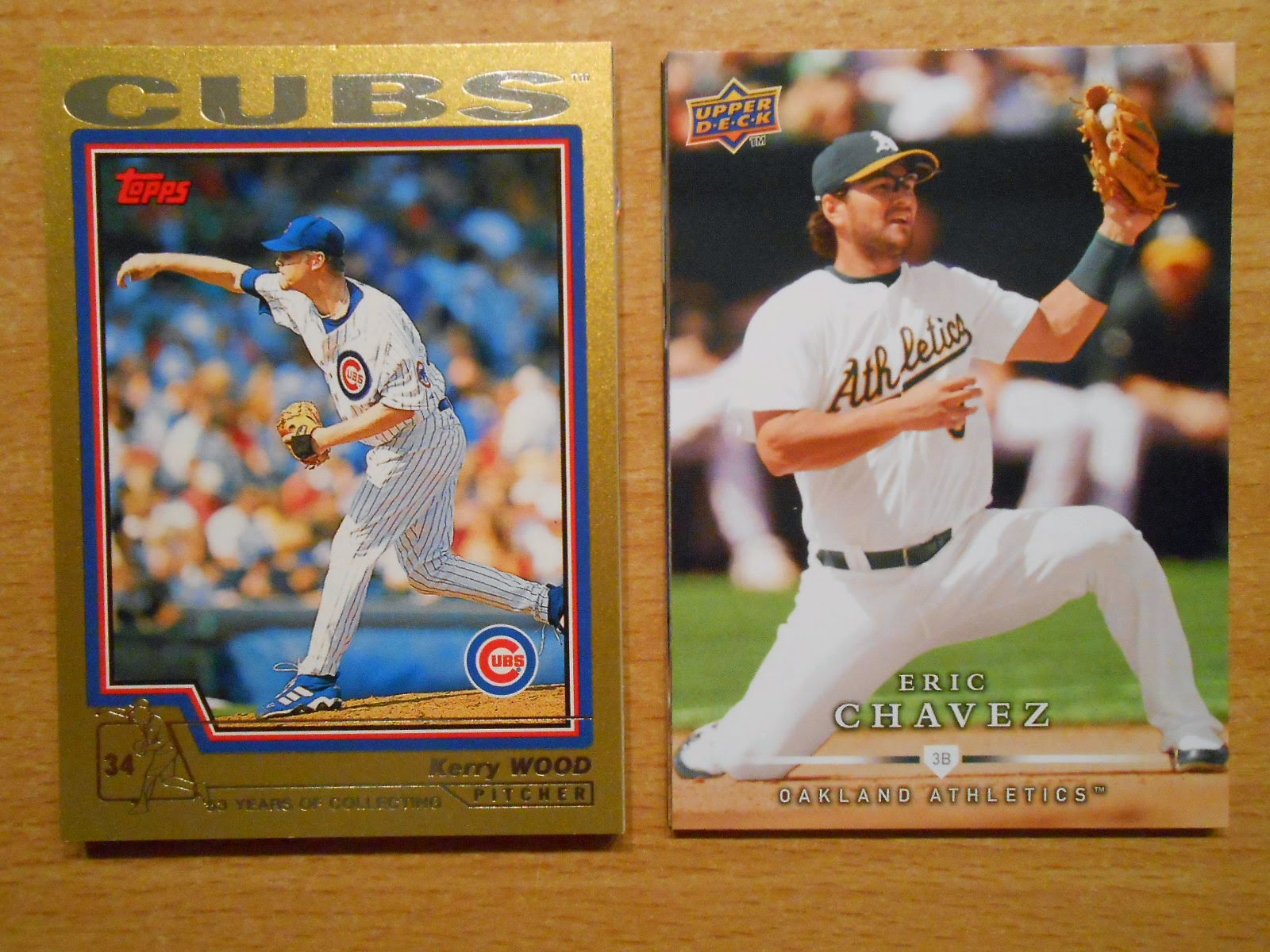 Ooooooh!  A gold parallel Kerry Wood card from 2004 Topps.  This is my 340th unique KW card.  Very nice.  Eric Chavez was a dynamo is his early A's days, but he's no match for an addition to a player collection. 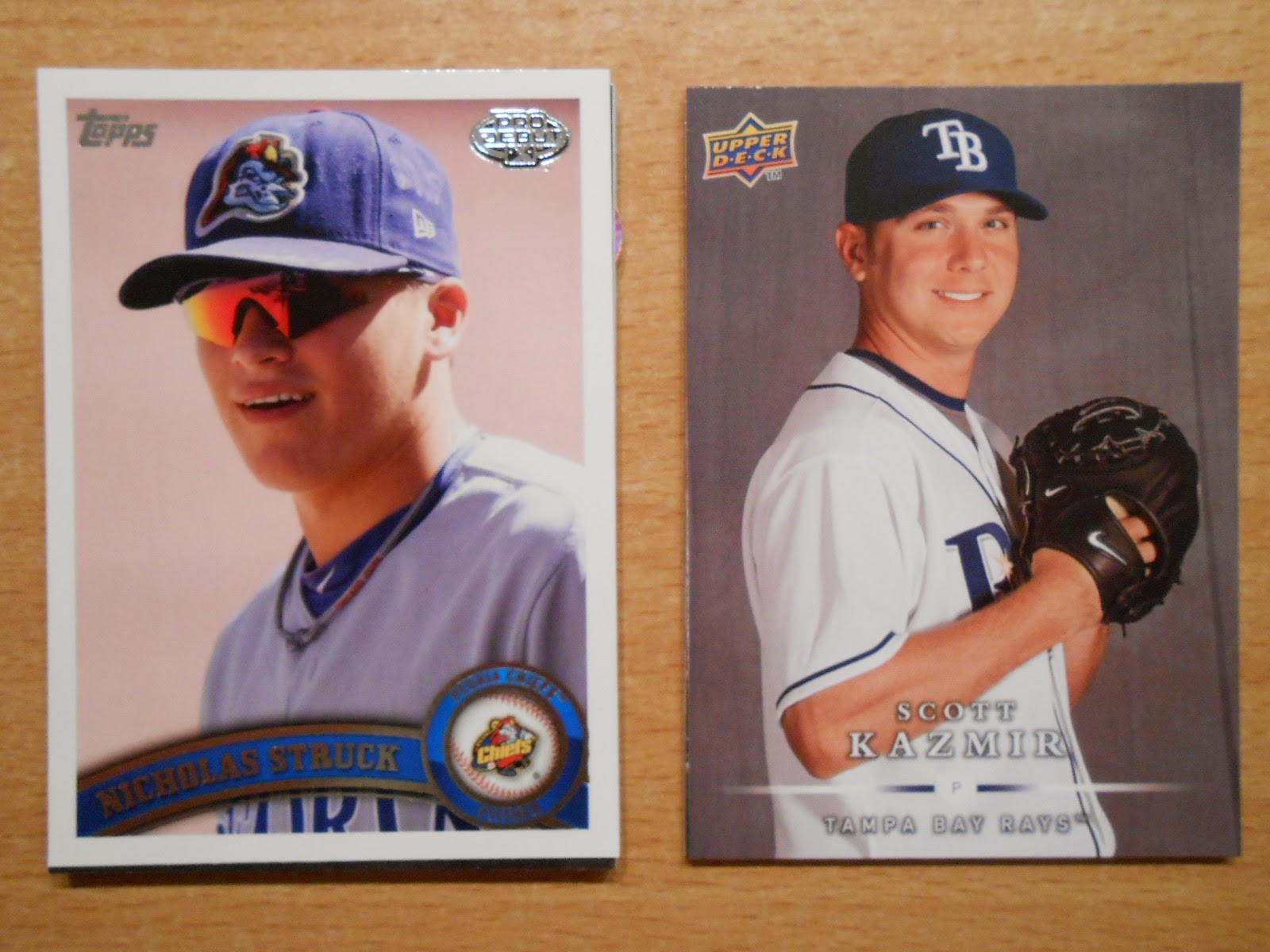 I drafted Scott Kazmir early in the spring of 2002 for my fantasy baseball keeper league.  In this particular league we had a minor league system and I thought Kazmir was the goods when he was coming out of high school (think Billy Wagner 2.0).  I once thought Nick Struck was the goods, too.  But, no longer.  Scott Kazmir scores another point for Fleer Ultra/Upper Deck in an attempt at a late rally.

Round 12:
In my mind Matt Szczur is the Cub on the current roster who has replaced Jeff Samardzija.  Yep, you read that correctly.  Look at the spellings of those two last names if you're not sure what I'm talking about.  Board Game?  One of my least favorite all-time Cubs.  He wore out his welcome in Chicago in a hurry.  Somebody please show Milton Bradley the door. 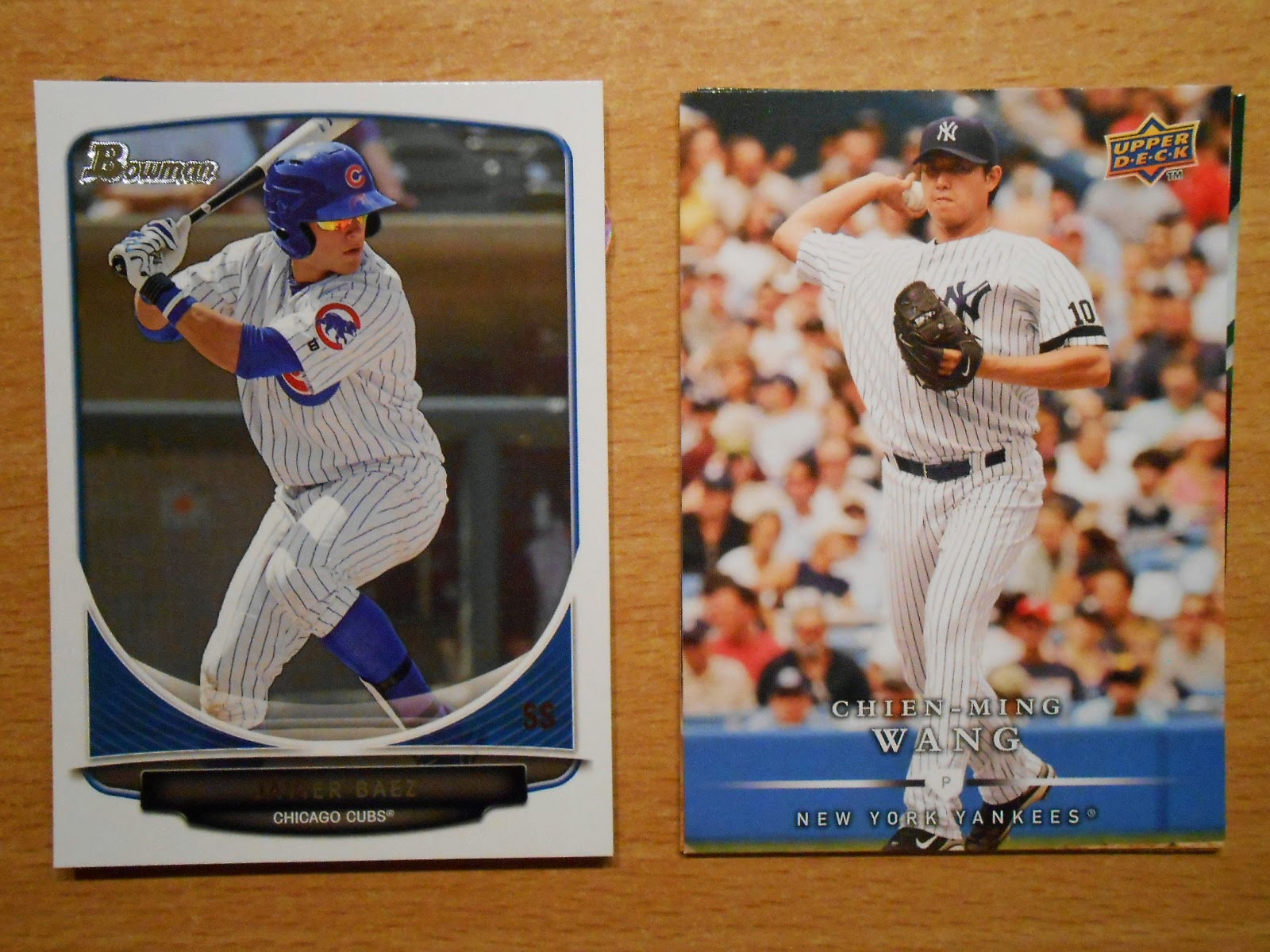 Baez!  The free-swingin' Javy Baez!  I really like the look of this card.  So much so that I have about two dozen of these in my collection.  Yes, I love my prospects! Chien-ming Wang?  A boring camera shot of a Yankee I don't care much about.  This contest is quickly getting out of hand! 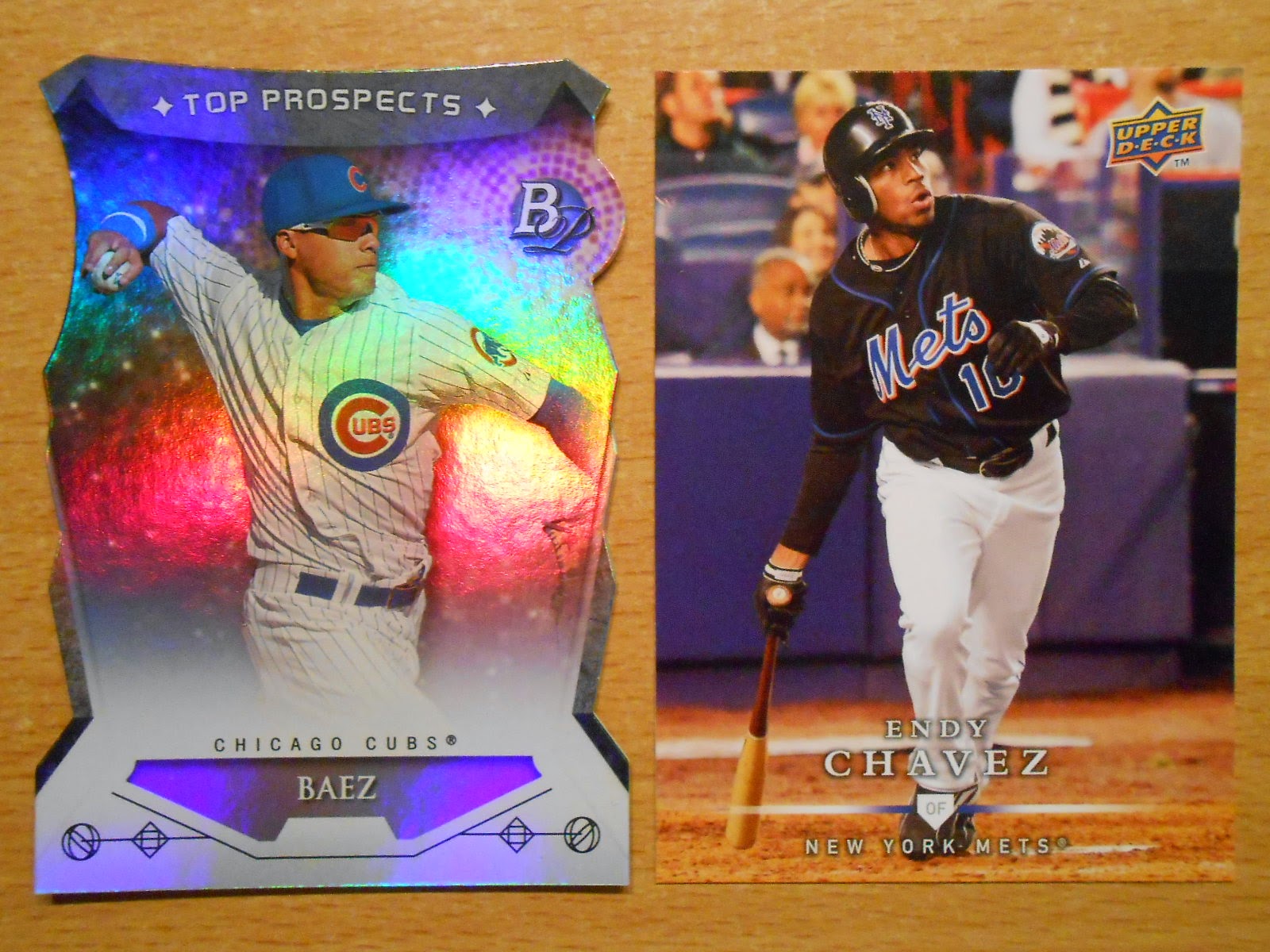 Whoa!  A die-cut of Javy Baez!  I like the Endy Chavez shot, but it's a die-cut AND shiny!  Case closed. 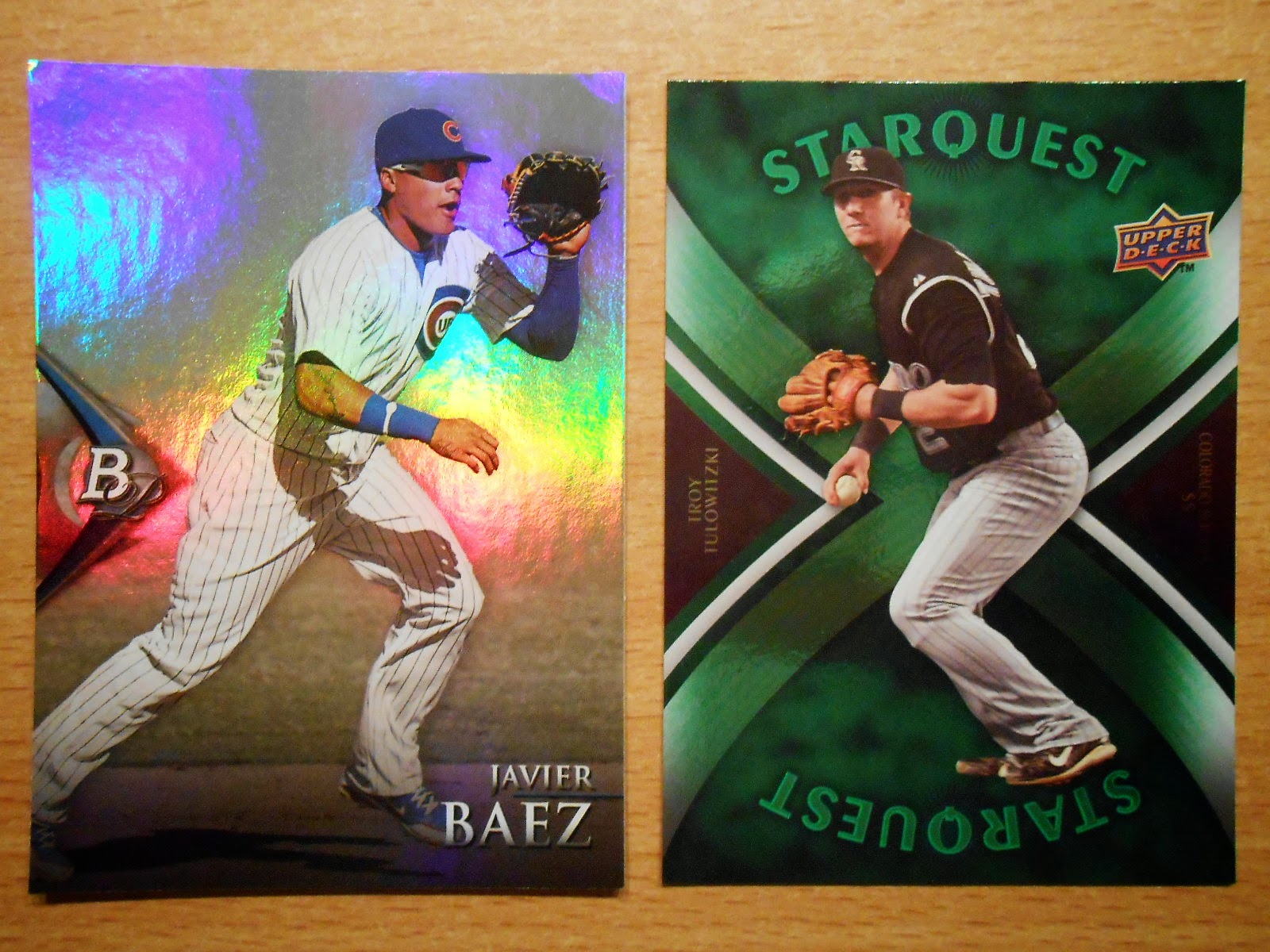 A dinged up (on two corners) Baez, which is a repeat for me, against a Tulo StarQuest card.  Tulo carried my fantasy league team during the first two-thirds of this season and I'm debating if I want to protect him for next year.  Tulo is a great fantasy bat, but he always gets hurt.   First world problems for sure.  Too little, too late for the tag team of Fleer Ultra and Upper Deck.

Wow, fifteen rounds in a Pack Wars.  This has definitely been a marathon, but a fun one at that.

Zippy Zappy, that pack carried some serious mojo!  Vintage, Szczur, Z-man, Kid K, Vogelmonster and ROCK SHOULDERS.  It's as though you can read me like an open book.  Thanks so much for zapping me, yet again.  When I rise up from my self-imposed baseball card hiatus I will be sure to repay the favor!  Thanks again!