I went to what will probably be my last minor league baseball game of the year this evening.  Things are winding down for my local team, the Peoria Chiefs, but that doesn't mean I still can't have fun at the ol' ballpark!

My friend Jim, who was celebrating a major birthday, threw out the ceremonial first pitch.  Low and and inside, but it caught the corner.  What a professional.

Select items were 50% off in the gift store tonight and I walked out with four baseball card sets for $10. 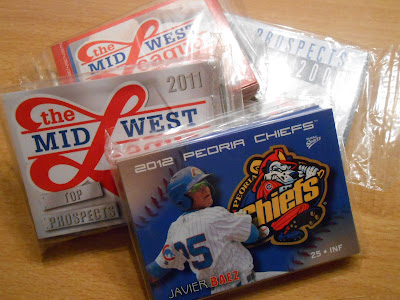 Three of the sets are prospect sets from past years in the Midwest League (low-A) and the other is the Chiefs' team set from last year which features Javier Baez. Who's Baez?  Cubs fans know.  He's a beast.

Lastly, we decided to cheer for Wade Hinkle.

Why cheer for Wade?  Well, because I remembered his card from this year's Bowman set. 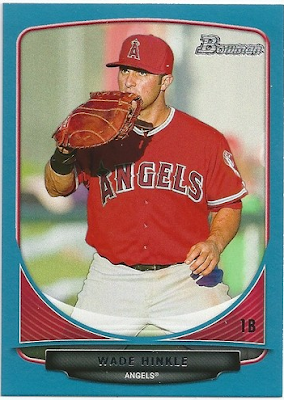 Additionally, even though they are the home team we don't usually cheer for the Chiefs.  We're still a little bummed that they're affiliated with the Cardinals now after losing the Cubs.  Bleh.   So Wade, a visiting player, received our adoration this evening.

He was playing first base and batting clean-up for the Burlington Bees, an Angels affiliate.  We chanted his name in the fifth and he singled to right.  Wade received a nice standing ovation from my little group.  Then he caught a pop up for the last out of the 6th and he tossed us the ball on his way back to the dugout.  I was the lucky one who got to take the ball home, which I'm pretty happy about. 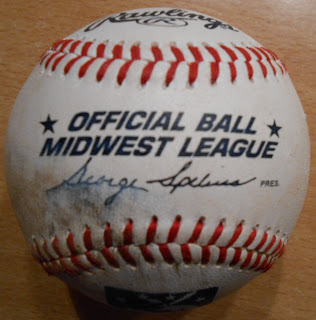 I think I may need to send one of his cards off to see if I can get it autographed.  He seemed like a pretty good dude.

Thanks for the ball tonight, Wade Hinkle!