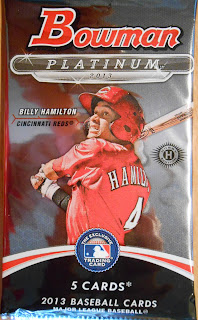 I witnessed by first Cubs' win in four chances last night at Wrigley Field with my sister and two good friends.  We saw Rizzo and Castro both homer, stuck it out through the 66 minute rain delay, and arrived back in Peoria a little after 2:30 this morning.

Running low on sleep all day was a stiff price to pay to see the white flag raised at Wrigley, but it was well worth it.

A mere five hours later I managed to not bite the heads off of any of middle school softball players at their practice.  Coaching thirty pre-teen girls over the course of three hour period can certainly be a lesson in patience and restraint even when one is well rested.  Yet, I persevered and decided to reward myself with a trip to LCS.

I love opening packs, so here we go! 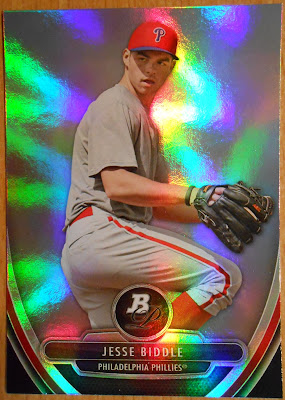 I'm guessing BPP stands for "Bowman Platinum Prospect".  I like prospects and I enjoy shiny.  Not a bad start. 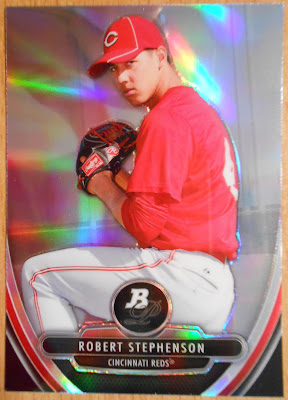 The regular edition cards seem to almost have a frosted shiny feel to the background.  Almost like the shininess is out of focus.  The Stephenson card is chrome and you can actually make out an outfield fence and light poles. Much clearer.  Both are shiny, but I prefer the chrome.

Go figure. When it comes to cards I have expensive taste. 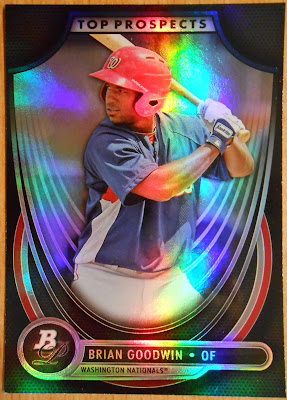 As a math teacher, I love all of the parabolas surrounding Mr. Goodwin.  I'm not sure they would appeal to most collectors, as it makes the card a little busy, but I'm sold!

Oh, and this was my third prospect of the pack, albeit an insert.  Huh, is this an all-prospect set? I thought I remembered Platinum having veterans within the set.  My usual cardboard reference site, BaseballCardPedia.com, doesn't have a checklist yet.  I guess time will tell. 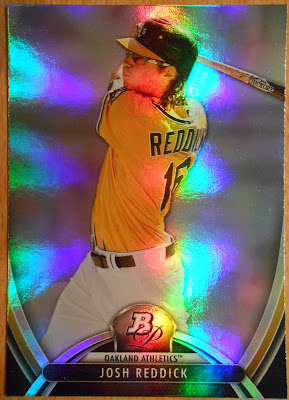 Ah, the first name I recognize and my first base card.  I love the grittiness of the A's and Reddick is a solid player. Nice. Yet, we're back to the frosted shiny backgrounds.  Meh.

Ooooooh!  A pack hit for this Cubs fan! I saw Baez play in Peoria last year and his talent stood out like a sore thumb on that team.  He's mashed 27 homers between hi-A and AA this summer.  Baez is bit of a free-swinger, but he's a top flight talent, and one that I'm waiting patiently to see play at Wrigley.

Well, at $5 a pack I think this will be the last Bowman Platinum pack I buy in 2013.  I like prospects, but only getting one base card out of the pack is set builder's nightmare.  Especially, at $1 a card!  The design is nice, but nothing too earth-shattering when looking at previous editions of Bowman Platinum.

As always, thanks for checking in!