A Case of Bowman Platinum Cubs

I was sent a PWE with some Bowman Platinum Cubs inside from My Cardboard Habit.  I really liked the design of the set and it just so happens I that I have mini collections of all the Cubs in the checklist, so I pulled the trigger on an Ebay case break.

The cards arrived and I thought I share what a case of 2013 Bowman Platinum could yield.

How about the "hits" first? 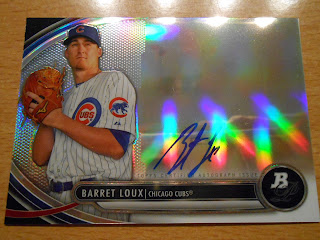 Barret Loux was acquired in a midseason trade from the Rangers last summer. He's currently pitching in triple A Iowa and is probably getting razzed by his teammates for the size and placement of his signature.  I guess Barret didn't realize that nearly two-thirds of the card is open for signing.  Bummer. 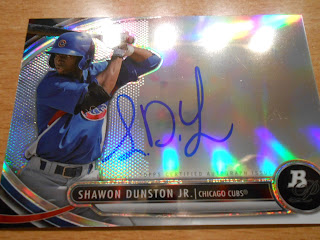 Shawon Dunston, Jr., a 2012 draftee, is currently playing with the Boise Hawks of the short season Northwest League.   His autograph is only slightly better than the one above.  It's larger, which is a plus.  But, on the downside he just signs his initials (lame) and he started the signature too far to the left.  Hmph.

In the case break I received three full team sets and plenty of repeats of some of the other guys.  It would have been five team sets, but I only got three Starlin Castro cards.  Yet, I did get a couple of parallels. 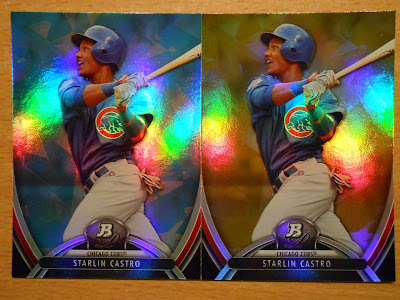 The one on the left is the blue parallel, the gold is on the right.

Speaking of parallels, how about an X-fractor and a blue refractor of last year's #1 draft pick, Albert Almora.  Nice! 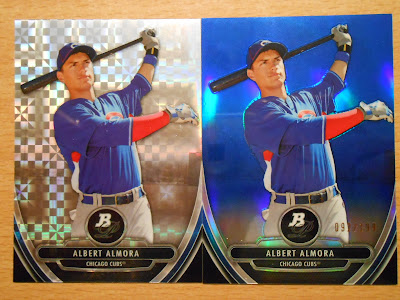 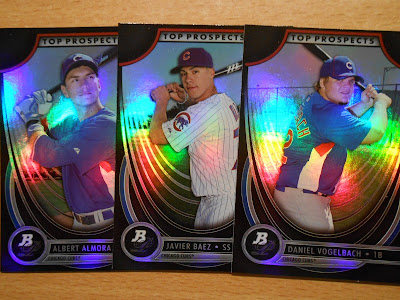 Baseball America Diamonds in the Rough: 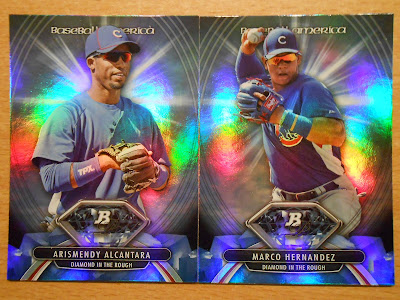 I'm a big fan of Arismendy Alcantara.  Marco Hernanddez?  Not so much.  I've seen both of these guys play in Peoria and I feel one has a legitimate shot at sticking in the majors, while the other may receive a "cup of coffee" some day if he's lucky.  I'm no talent scout though. So, whatever.

Let's not forget the rest of the base cards:  Anthony Rizzo, Jorge Soler, Baez, Almora, and Vogelbach. 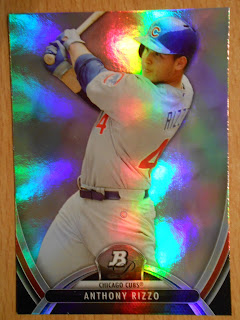 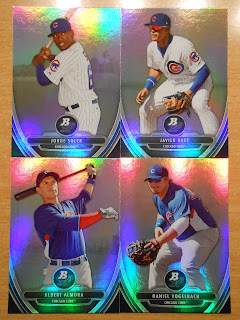 I don't know if I'd do another case break like this one.  The guy ripped through 12 boxes (one case) in under thirty minutes and only showed the prospect cards and autographs.  I'm pretty confident that I got everything that was coming to me in the end, but perhaps I went a bit overboard with an entire case when a team set would have sufficed?

Off to Ebay I go with my duplicates to try to recoup some of my coin.