To fuel my quest in building the 2020 Topps Big League set I took a different approach this year by purchasing five blasters. Yes, I'm aware I could have gone with two hobby boxes and come out, with any luck, a dozen or so cards away from a full set.

Yet, hobby boxes don't have purple parallels on the side of them that one can cut out. 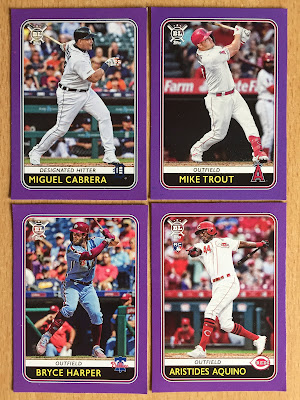 Is it me or is Topps really pushing Aquino this collecting season? Did you see the Reds have assigned him to the minor league facility for Spring Training 2.0?

While I'm on it, Aquino reminds A LOT of another hot rookie during the junk wax era who also hit a bunch of home runs in a short period. Here are the stat lines for comparison.

Maybe you can remember who I am referring to? Bonus if you can!

Back to Big League . . . Orange parallels come at a rate of one per pack, but five blue parallels, which are so eye-catching, accompany each blaster. Just another reason to go with blasters for the set build. 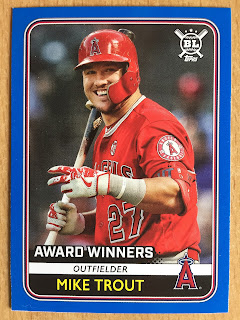 The Trout highlight card was probably my second best blue parallel. You may see the Mookie I pulled on a Dodger card blog in the future, but I would consider that to be the best of the 25 blues.

Let's take a break from the parallels so I can show off my favorite base card from this year's set. 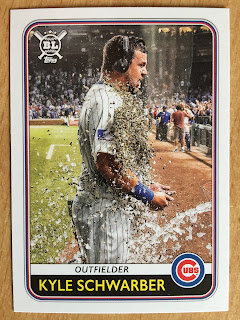 I really enjoy cards showing a player getting doused with Gatorade or pied in the face during a post game interview. Sunflower seeds is one I haven't seen before!

Okay, back on the parallel train. Only one of the five blasters didn't contain a numbered card, so I'm call that a win in my book. 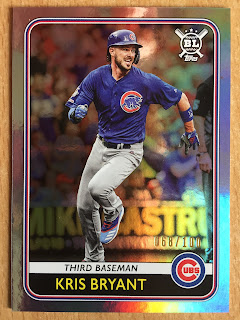 The Bryant card is the big card out of this group. Oddly enough, I didn't pull a Kris Bryant base card though! 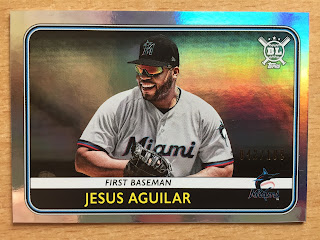 Is there a Jesus Aguilar super collector out there? 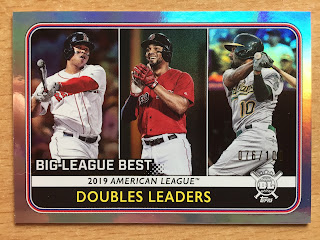 Perhaps a Red Sox fan would be interested in this one? 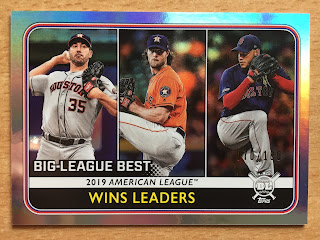 Again, this one is up for trade, too.

The foil parallels are serial numbered to 100. For what it's worth, the last one came from a hanger pack and not a blaster.

I was fortunate to pull a black and white parallel as well, which are numbered to 50. 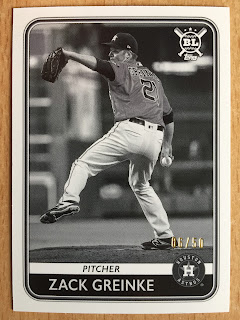 Zack Greinke is a good dude, but this one doesn't really fit in my collection either. Any one up for a trade?

The blaster that had the Greinke black and white card also had an auto. It's not numbered, although it is a parallel. I wasn't expecting an auto as the odds are long on finding one. 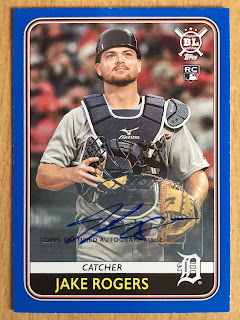 I'm not sure what to do with this one either. I know a Tigers fan who also fancies catchers in gear. Hmm...

That's the end of the "hits" portion, but I have one more which I was more excited about than anything you've seen above. You can probably guess who it is. I am fairly predictable after all. 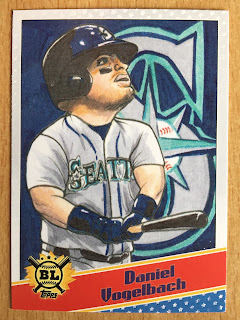 The Superstar Caricature inserts fall at a rate of one per every four packs and the checklist for this insert set is 30 players deep. I feel pretty lucky to have pulled this one for the player collection, but I still need another for my set build.

Speaking of which, my want list for everything Big League is located at the top of the blog as one of the tabs, but I've also linked it here so it's easy to access if you're on a mobile device.

If you have anything I need please send me an email to mrcoach00 at yahoo dot com and I'll see what I can do about sending you something back of equal value. Thanks in advance for the set help!