Welcome to our eleventh installment of the Hall of Fame Binder. There are a couple of very big names within this page, but it's also a page that I feel needs a lot of work. I'm thankful for the 1980 TCMA Baseball Immortals set, but three cards from one set on a page is a glaring flaw in my eyes. 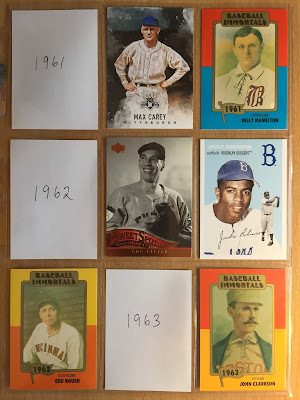 Let's break down the cards/players! 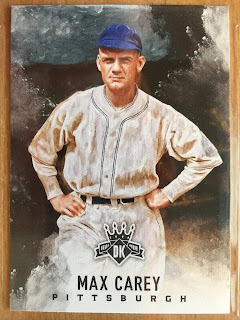 Max Carey is ninth all-time in career stolen bases. A veteran of twenty years, Carey was a speedy outfielder who batted 0.285 and had an on-base percentage of 0.361. When he got on base he terrorized pitchers, as he led the league in stolen bases during ten different seasons during a span from 1913-1925. 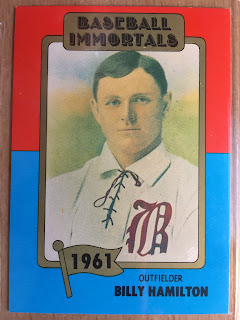 Are all professional baseball players named Billy Hamilton lightning quick? This Hamilton played from 1888-1901, owns a career average of 0.344, and he led the league in stolen bases, walks, and on-base percentage five times each. He is third all-time in stolen bases behind Lou Brock and Rickey Henderson. 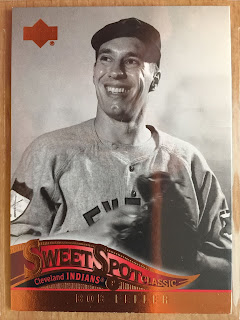 Bob Feller is one of my favorite Hall of Famers. I've written about Feller a couple of times on my blog. My two favorite facts about the Heater from Van Meter are 1. he is one of only two players to strike out as many players in a game equal to his age and 2. his high school graduation was broadcast across the country by NBC radio. Lastly, he had already led the league in strikeouts four times before he left to serve in World War II at age 23. How crazy is that? 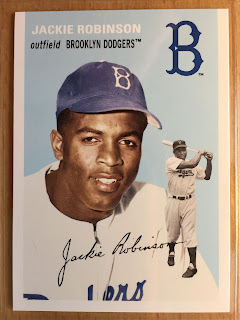 Like Feller, Jackie Robinson is in my top 5 favorite Hall of Fame baseball players. Arguably, he is one of the best athletes to ever play the game, but he'll forever be known as the man who broke the color barrier. I've read a number of books on Robinson, saw the movie 42, and wrote my senior year term paper on him and Branch Rickey. I have a couple of dozen Robinson cards in my collection, but I like this one the most because it looks about as vintage-esque as possible. 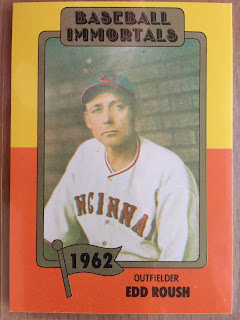 Edd Roush is the third center fielder on today's page. Roush batted 0.323 during his eighteen year career, which was mostly spent with Cincinnati. He won two batting titles and had some doubles and triples power. He led the league in sacrifice hits (33) and in slugging percentage (0.455) in 1918. It was a different game back then! 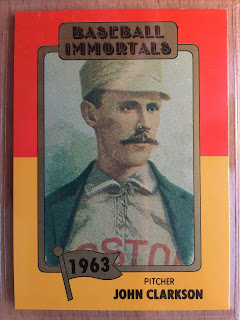 John Clarkson, a 300 game winner and owner of a career 2.81 ERA, pitched exclusively in the 19th century. Twice he logged more than 600 innings in a season! He pitched for the Chicago White Stockings (Cubs) and Boston Beaneaters (Braves) during the prime of his 12 year career.  I love the old-time hat and mustache in that colorized photo!

According to my records I'm supposed to be scouring the card collecting world looking for upgrades for all of these cards.  The Max Carey Diamond Kings card isn't bad, and I don't mind having one card for the TCMA set, but not three. Someday I would like to splurge and get an actual vintage card of Robinson and/or Feller, but I think I'll need to do some saving first!