I was mildly frustrated with myself last weekend when learning I had mistakenly forgot to delay the HOF Binder post to Wednesday. I've been writing these the weekend before and then scheduling them for some easy mid-week reading. I wound up breaking my streak of Wednesday HOF posts and burying my post from earlier in the day. Double whammy!

Let's see if I can't rebound here a bit.

This week we have another pretty solid page, all the way around, with only having to double up on TCMA's Baseball Immortals set. I like when the page starts off with a year marker, but I dislike when I'm not able to see the entire induction class from one year. In this case we're missing Ray Schalk and Dazzy Vance from the 1955 HOF class. They'll just have to wait until next week! 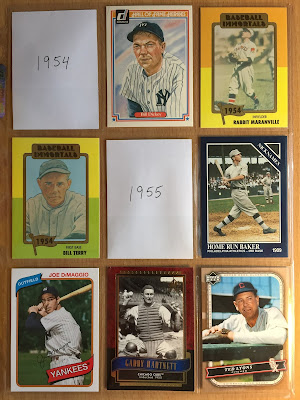 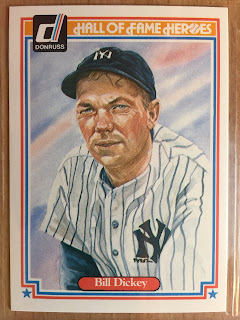 The 1983 Hall of Fame Heroes set from Donruss is absolutely stunning. The artwork is masterful and the player selection is top notch. I don't own much 1983 Donruss other than Sandberg's rookie card, but I've been picking these cards, from the 44-card boxed set, out of dime boxes whenever I can find them.
Bill Dickey, played his entire seventeen year career as a catcher for the Yankees. He took time to serve our nation in WWII later in his career, but during his prime he was the best offensive catcher in the game. He was an eleven time All-Star, garnered MVP consideration during nine different seasons and he was a SEVEN time World Series Champion. Dickey walked twice as many times as he struck out in his career, swatted 200+ homers and had a career batting average of 0.313. 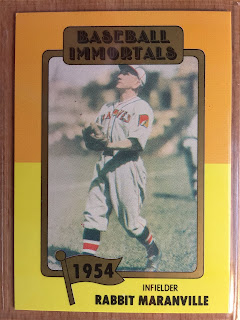 Walter James Vincent Maranville played for five different organizations, mostly as a shortstop, during his twenty-three year career. He was all of 5'5" and was noted for his defensive prowess. He earned MVP votes during parts of eight different seasons, but that was mostly due to playing on winning teams and being an integral part of the defense. The lifetime 0.258 hitter never had an OPS register higher than 0.750 and it is said he was given the nickname of "rabbit" by a little girl who insisted he bounded around like one on the base and in the field. 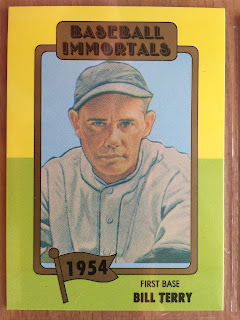 Bill Terry, a middle of the order stick for some great New York Giants teams, won the batting title in 1930 with a 0.401 mark. He was a career 0.341 hitter with decent pop. He would have earned many more than the three All-Star selections he earned if the majority of playing career hadn't come before the first All-Star game in 1933. 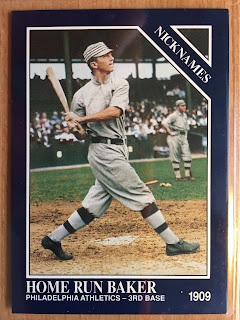 John Franklin Baker swung a 52 ounce bat and led the AL in home runs from 1911 to 1914 with 11, 10, 12 and 9, respectively. The first seven years of his career were spent with the Philadelphia Athletics, but he sat out the 1915 season, at the age of 29, over a contract dispute with Connie Mack. Mack sold his contract to the Yankees the following year and hit 10 homers in just 100 games to finish second in the AL in homer to Wally Pipp's 12. Baker also sat out the 1920 season due to family issues. He finished his career with the Yankees as Babe Ruth was just starting to earn his homer hitting reputation. Baker was once quoted as saying, "I don't like to cast aspersions, but a Little Leaguer today can hit the modern ball as far as grown men could hit the ball we played with." 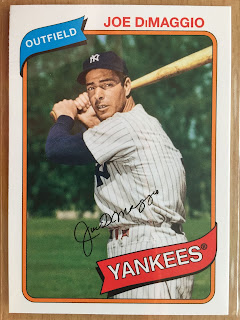 Everyone knows about Joe DiMaggio and his legendary hitting streak. I would like to remind you that he won three MVP awards at the ages of 24, 26 and 32 . . . and that he spent his prime, ages 28-30, serving in the Military. Also, he was an All-Star thirteen times during his thirteen year career. Wow. 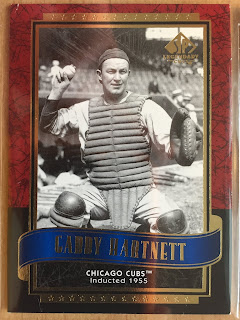 Gabby Hartnett, one of my favorite Cubs, hit 236 homers and batted 0.297 as a catcher over twenty seasons. He was the NL's answer to Bill Dickey for a number of years and might be better known for his Homer in the Gloaming during the 1938 pennant stretch. I can't do the story justice, so you should just go ahead and click on the link. 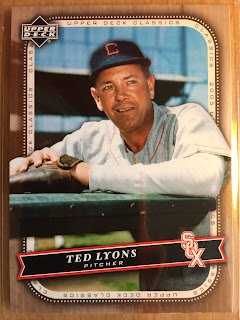 Ted Lyons was the ace of the White Sox staff for six years, but then he suffered a shoulder injury during the 1931 season at the age of 30. After his shoulder injury he became more of a junk ball pitcher, and although he never relied solely on his knuckleball it was a large part of arsenal. In 1942, at the age of 41, he led the league with a 2.10 ERA. He spent the next three seasons in WWII with the Marines. He returned to baseball at the age of 45 and pitched well, but soon retired to the dugout to manage. Lyons finished with a career record of 260-230 and an ERA of 3.67.

Again, I'm happy with the page, but I would like a couple of upgrades if possible. First, I feel like Bill Terry should have a few more cards out there, which would help the fact I had to double-dip on the TCMA Baseball Immortals set. Secondly, and this is probably more of me dreaming big, but I would love to find something older of DiMaggio. I doubt I could ever afford something from his playing days, but if it's in poor enough condition then maybe I could have a shot!

My favorite card from this page is the Home Run Baker card. Don't sleep on those colorized Conlon cards . . . they are fantastic! Plus, Baker's career is fascinating to read about. The Hall of Fame Heroes card of Bill Dickey would be a close second.