We've reached a milestone of sorts with Page 10 of the Hall of Fame binder. At the onset I was wondering if I would be able to follow through with my goal of posting a page per week and I'm pleased to report I haven't hit a speed bump yet. In fact, I'm a little more than a quarter of the way finished with this series.

Prepare yourself for an education, for there aren't a bunch of household names in this post! 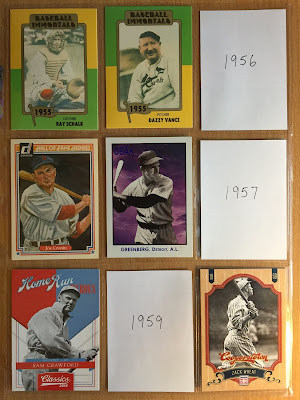 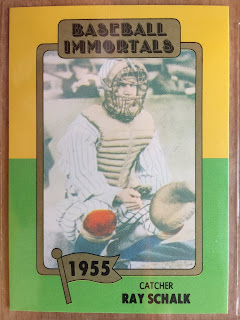 Ray Schalk was not an offensive juggernaut at the plate, but he was a defensive force behind it. His career numbers include 11 homers and a 0.253 batting average over 18 seasons, but he also threw out 52% of all would be base stealers during his career. In fact, in 1925 Schalk cut down 61 of 85 base runners, 72%, which led all of baseball. Wow. 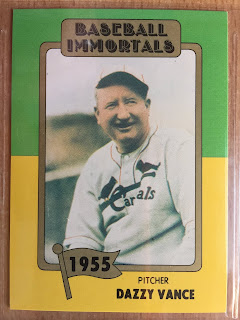 Honestly, I knew nothing of Dazzy Vance before today, but he had quite a nice career. In 1924 he won the pitching Triple Crown and the MVP with 28 wins, a 2.16 ERA, and 262 strikeouts over 35 games pitched. From 1922 to 1931 he led the league in multiple pitching categories with the Brooklyn Dodgers. 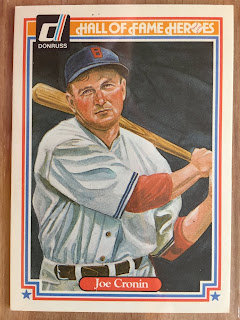 Joe Cronin was on my radar before this series started, but that's only because I knew him as Moe Berg's manager at the beginning of The Catcher Was a Spy movie. Cronin had a great career and earned MVP consideration in eight seasons and was an All-Star in seven seasons. Mostly a shortstop during his 20 year career, he batted 0.301 and provide nice pop with 60+ extra base hits in eight different seasons. 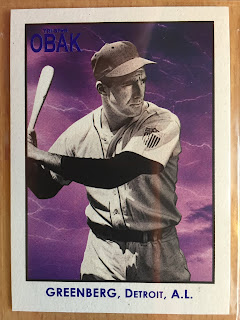 Hank Greenberg, the biggest name on today's post, is another player whose ball career was put on hiatus when he served in World War II for 3+ seasons. Here are some of his career highs, which were set in parts of different seasons: 63 doubles, 16 triples, 58 homers, 143 runs, 184 RBI. and 119 walks. What a masher. In 1938 he had tallied 58 homers with five games to go in the season and only needed two more to tie Babe Ruth's record. Wouldn't that have been something if Hammerin' Hank owned the single season home run record until Maris? 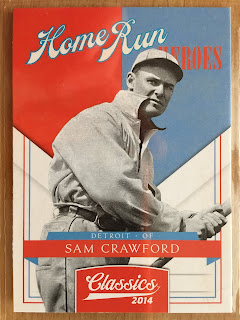 Give Sam Crawford's career a quick peak . . . you won't be disappointed. To start things off he led the league in homers in 1901 and 1908 with sixteen and seven, respectively. The outfielder of nineteen seasons played before the All-Star game came to be, he never won a world championship and was only given MVP votes during four different seasons. Personally, I think he was highly underrated and maybe playing for Cincinnati and Detroit hurt him a little in the public eye? He was a 0.309 career hitter, stole 367 bases, and is the career leader in triples with 309. Your average player won't hit twenty triples in their entire career . . . he swatted twenty in a season five different times! 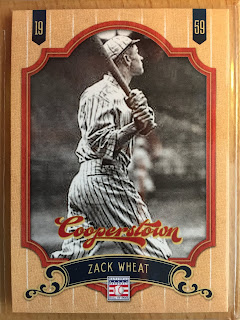 Zack Wheat played nineteen years (eighteen with the Dodgers) and the left fielder won the batting title in 1918 with a 0.335 average. Wheat, in my opinion was very much like Crawford. Both were outfielders, batted lefty, hit over 0.300, could hit a double or a triple, they walked more than they struck out, and both could steal a base.

There's definitely some talent on this page, but Cronin and Greenberg were the only names I was familiar with before crafting this post. As far as the cards go, the 1980 TCMA Baseball Immortals set is really saving my butt here, but I sure would like to find some other cards to put in their place, especially when there are multiple of them on the same page. My favorite card is the Joe Cronin card and it's also the only one which has a vintage-like feel in my opinion. I'd like to replace the others, especially, the Greenberg card with all the lightning in the background.