One Gesture Leads to a Second

Back in December I posted a feel good story about passing on a baseball card to one of my high school's maintenance workers from his playing days. Alex, a blog reader, enjoyed the story and decided to make a significant contribution. A week or so later I received a yellow padded envelope with about twenty more Roberto Batista cards. There were numerous duplicates in the package, but even better was that at least one copy of every card produced from his playing days was included.

Shortly thereafter I hit up Dave at Minor League Singles and cleaned out his Roberto Batista inventory. There was a spell back in January and February where I'm sure I was ultimate Roberto Batista collector! I had 31 copies of his cards from his minor league days.

Seven of those cards went into a card frame I picked up on Amazon. 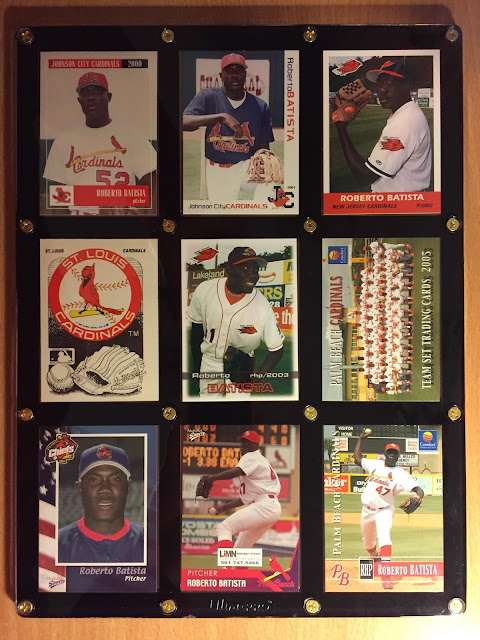 I filled out the other two card slots with a team photo card and a Cardinals logo card from Fleer.

Twenty-three of the remaining cards went into a clear plastic case with a bow placed on top.
The last card was to receive an autograph to send back to Alex. I was able to locate a few other cards to send to Alex as part of a thank you package for being so generous with his card funds to surprise a former minor leaguer, who he has connection to, with a nice gift. 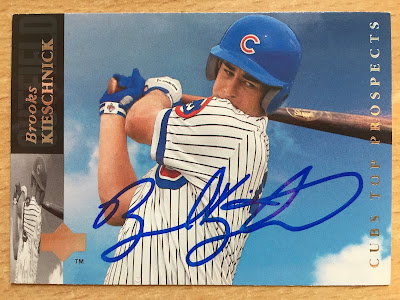 The generosity from Alex did not stop with Roberto cards though. Somewhere during all the planning and waiting he slipped a PWE into the mail with a Brooks Kieschnick in-person autograph. Score!

Planning and waiting . . . Well, I wanted to surprise 'Berto with the frame and all the duplicates for his birthday, which was March 10th. I placed everything into a gift bag and it sat in my closet at school for the entire month of February. Sometimes waiting is the hardest part! On March 8th my school had a half-day and I was able to track down 'Berto at lunch and I pulled him aside into one of the nearby faculty lounges for some privacy.

He saw the gift bag and he started shaking his head, left-to-right, and repeating, "What did you do?" I tried to explain as best I could about how I collect cards and then write about them on my blog on the internet. I mentioned how one fellow collector thought he should have more cards from his playing days than just the one I gave him back in December.

I handed over the gift back and his hand found the clear plastic case of cards at the bottom. I don't think he knew what to make of it at first and I explained they were all duplicates to keep or to pass on to family and friends. He then reached in again and pulled out the frame.

At first he was kind of speechless, save the occasional "Oh, My God." He sat down, placed the frame on the table and started pouring over the cards. I interjected that I thought there was a copy of each of his cards in the frame. He then said, "Yeah, a card for every team I played on except the summer league." 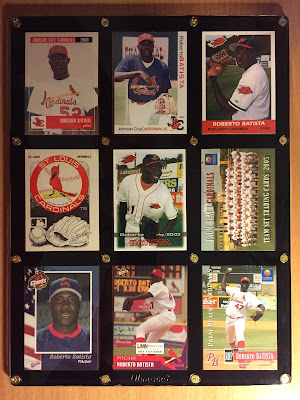 'Berto then repeated something he said from our initial baseball card encounter back in December, "I don't have much from my playing days."

He continued with more, "They sold everything. When I didn't make the majors they got rid of it all."

I didn't prod, but from what I could tell his baseball mementos, although priceless to him, could be had for the right price if it meant helping his family. He mentioned something about how he doesn't even have his All-Star trophy. I'm assuming that was from his 2003 season where he led the NYPL in saves with a 0.88 ERA.

Roberto, humble and gracious as always, was truly touched by the gift. We parted with some smiles and a handshake and I made off for my afternoon meetings. Later, on my way out of the building to baseball practice, I bumped into another maintenance worked and she commented how nice the card display was and how appreciative 'Berto was of the gift. I thought it was pretty cool that he thought enough of it to show off to his co-workers. That made me smile.

I want to thank Alex for reaching out and providing so many more cards for this endeavor. I had plans of my own to grab one of each of his cards, but Alex really came through with his package of twenty cards.

It's been about ten days since I surprised 'Berto with the cards, but I've seen him a few times since then, while coaching the baseball team, and I always get the biggest smile and a wave.
Posted by P-town Tom at 3/18/2019 04:39:00 PM