Brackets, Baseball and Ogle that Vogel!

As an assistant coach for a high school baseball team I've been hearing a lot of chatter about college basketball. All my players are talking about Duke, Zion Williamson and Ja Morant. It sounds like each player has at least different brackets filled out!

I did fill out a thoughtless bracket, but I haven't watched one minute of the action so far. My hometown Bradley Braves made the tournament for the first time since 2006 and they had a strong showing against Michigan St. in the first round. Unfortunately, the Braves game started while I was teaching and finished during the middle of batting practice. The other assistant coach was the listening to the audio feed and reported with updates during BP, but that's as connected to the madness this March as I've been.

It's been a fun couple of weeks for a baseball fan like myself and basketball hasn't been able to captivate my interest. Here's a list of recent baseball happenings and my take:


Hey, another low-numbered Vogelmonster arrived in the mail this week. 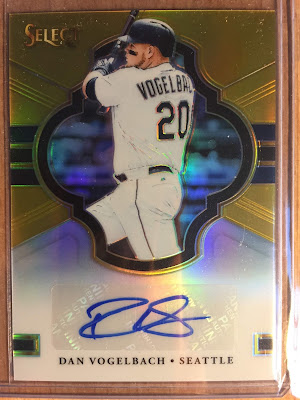 This one comes the 2018 Panini Chronicles set. I already have the "base" auto of the Select Signatures card and the gold (numbered 09/10) only leaves me chasing the 1-of-1. "Only" two parallels for the base? I can get behind that!