I was scrolling through my Twitter feed the other day and saw a link to Cardboard Connection's page of 2017 Topps Series 2 variations. When I first saw the page there was only about a half-dozen listed, but as cases have been busted more have been found and the list has increased to forty cards.

Some cards have only one variation, like Jose Abreu's card, #593. Here's the base: 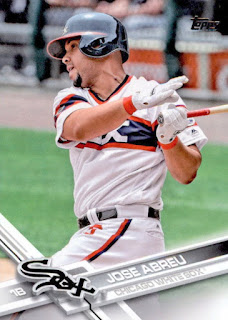 And now the variation: 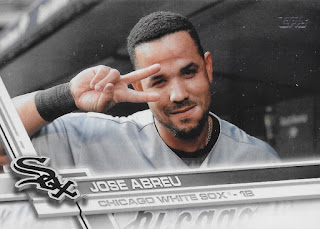 I'm not against variations, especially when they involve a fun snapshot. Plus, it gives collectors something else to chase rather than your standard color changing parallel.

I kept scrolling through the gallery and noticed there are some "legend" variations, which is pretty neat.

Anthony Rizzo and Ernie Banks share a card, but let's switch things up a bit by showing you card #650.  Here's the base: 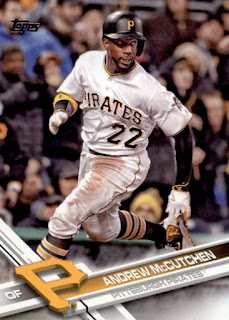 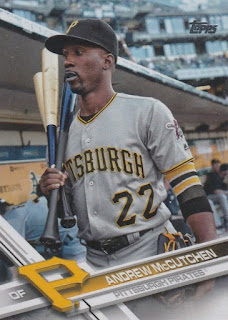 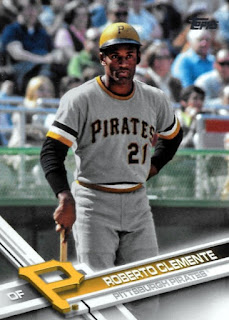 Cutch is one of my current low-key favorites in all of baseball. Roberto Clemente is probably in my top ten favorite players of all time. (Perhaps I was a Pirate fan in a past life?)

Back to the point: all three of them share the same number, #650.  Now, that's variety!

So, you may be thinking, "Topps doesn't mind putting in a little extra effort to add some variety to its product. Good on them."

Well, I'm here to tell you to hold on a second before patting Topps on the  back. They are up to their same old tricks again.  Take a gander. 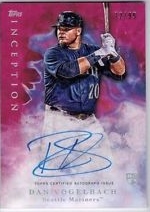 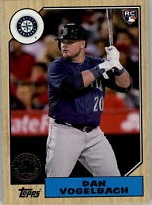 I was pretty stoked to learn my man, Dan Vogelbach, was included in Topps Inception. I've accumulated all of the auto parallels, except the 1/1, and they look fantastic grouped together.

When I learned Vogelbach would have a base card in Series 2 I jumped for joy! And when I discovered he had two inserts in Series 2, including two autos, I had to pinch myself. I mean, heck, the guy hasn't even logged 30 MLB at-bats yet.

Then pictures started to surface. Ugh. Topps has put out four different (non Topps NOW) Vogelbach cards this year and used the same photo on every one. Where's the variation now?  I went to Getty Images and found 54 different photos of Vogelbach in a Mariners uniform, including the one Topps used repeatedly. I even found a few other photos I thought would work nicely: #1, #2 and #3.

But I guess it wasn't meant to be. Sigh.

It's frustrating to this collector. Actually, it has me reconsidering my entire "let's chase down every parallel of The Vogelmonster" train of thought. Do I really need two dozen cards with different borders and color tints if they all have the same exact batting pose?

Maybe I should add some variety to my collection and start buying more Panini and Leaf products?

Or, perhaps, I should just sleep on it and give myself a little time to cool down.