I have not purchased any packs in 2016 and I have yet to add a base card from Topps 2016 flagship product, but thanks to gcrl I now have some Heritage! I don't know why I linked his blog, because it's gone dark, but Jim is still out there dispersing cards. Thatta boy! 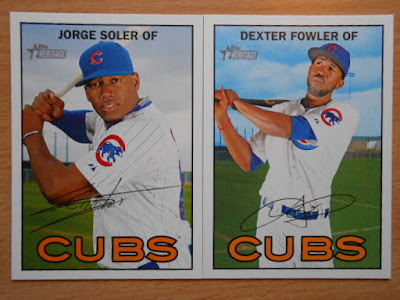 Two-fourths of the Cubs outfield.  Yes, I'm a math teacher.  Yes, I know you can only start three outfielders. I'm figuring both of these two guys will get over 100 starts along with Kyle Schwarber. Heyward should start around 150.  At least, I hope that's the plan.  Only his guy knows for sure: 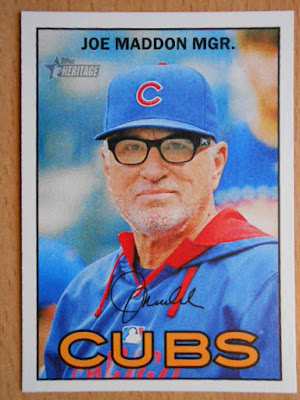 It's my first Joe Maddon card donning Cub blue!  Simply. Awesome. I really like the look and feel of this year's Heritage issue, but I'm not a fan of the really thin and really small signatures. The thinner the signatures are the more they look like facsimiles. 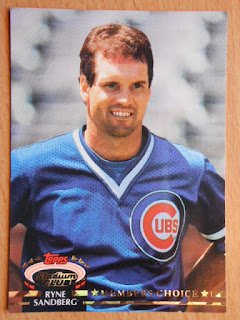 GCRL also threw in a Ryno from 1992 Stadium Club's Members Choice.  It's a nice shot of Sandberg in between rounds of batting practice at Wrigley Field. That's my best guess. I believe he's sporting some helmet hair.  No?