I did some light holiday shopping this evening after work and on the way home my car somehow turned into the parking lot of LCS. It's weird how that keeps happening. I've been waiting for Zippy Zappy's clone breaks and I'm afraid his LCS and FedEx have had other plans.

My plans were to buy all the Yankees singles from Bomwan's recently released Draft & Prospects set I could find and then ship them off to Torren' Up Cards post haste.  No dice. The owner just got his case yesterday and he's been too busy to open any, so I left with a hobby pack and a jumbo.  Maybe I would get lucky and find a Yankee hot pack? 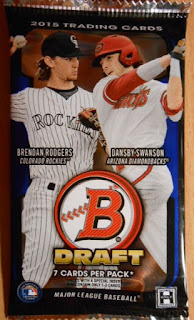 Let's bust in and find out! 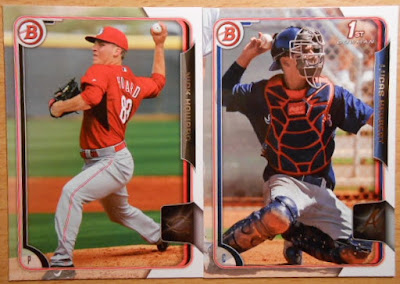 Nick Howard, the Reds 1st round pick in 2014, and Lucas Herbert, the Braves 2nd round pick 2015 were my first two cards.  Can't argue with high draft picks I guess. 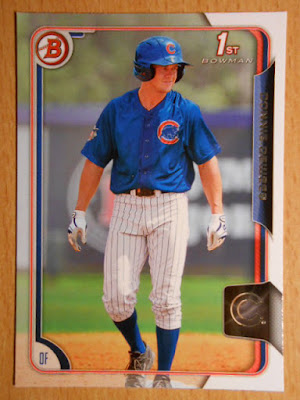 Donnie DeWees!  Nice!  DeWees was the Cubs second round selection this past June. He's a lefty bat that plays centerfield and he's only four years younger than the Cubs new centerfielder, Jason Heyward.  For the record, I'm okay with the signing of Heyward, but it's a lot of money.  My hope is Heyward opts out after three or four years, which will mean he thinks he can get more money on the open market.  Which will also mean two things for the Cubs: 1. Heyward had a nice run while in Chicago, and 2. more payroll flexibility for the Cubs when he leaves. 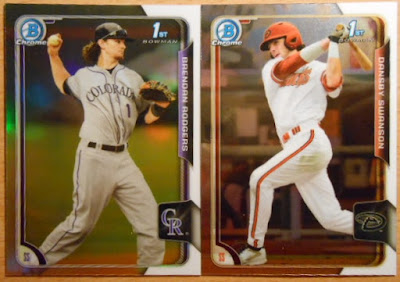 My two chrome cards in the pack are the guys that are shown on the front of the Bowman Draft wrappers. That HAS to be a good thing, right?  Brendan Rodgers was the 3rd player selected overall and Dansby Swanson was the 1st guy to fall from the draft boards. Swanson is also now a Brave after their fleecing of the Diamondbacks the other day. 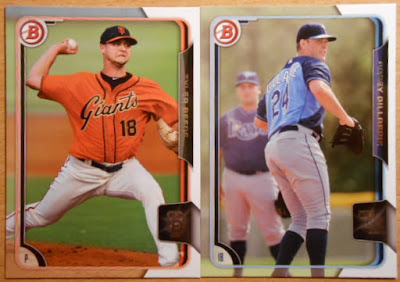 The last two cards in the pack were Tyler Beede and Casey Gillaspie who were both first round picks in 2014.  Lots of high draft picks, a Cub, but no Yankees.

Here are the highlights from the Bowman Draft jumbo pack: 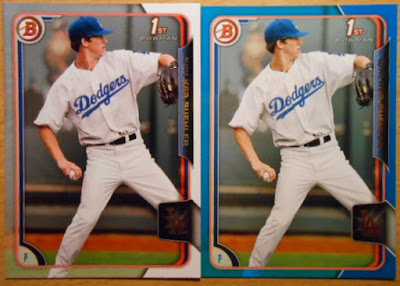 Walker Buehler base and blue paper (#/150) make for a Buehler hot pack!  Anyone interested in this pair?  Buehler? Buehler? 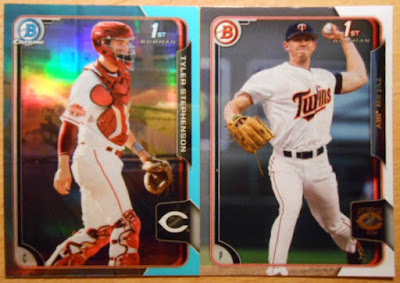 The Tyler Stephenson card is different from the other chrome cards, but it isn't numbered and it doesn't boast that it is a refractor on the backside. It also has a light blue tint to it.  Anyone have any ideas on this one?  Tyler Jay set many a record for the University of Illinois last season and was selected in the first round by the Twins in the draft six months ago.  I expect him to move quickly through the Twins farm system.  Because of the local Illinois connection he is someone I will keep an eye on. 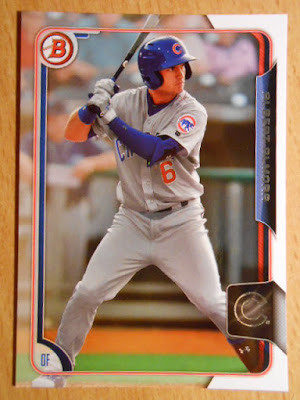 Albert Almora!  Albert is another guy who is now, at least temporarily, blocked by the acquisition of Jason Heyward.  He is by far the best defensive outfielder in the system, but the bat has not played up as expected. I hope bigger and better things are ahead for Almora in 2016.

The teams with the most cards from the two packs, which contained thirty-nine cards in all, were the Reds and Rockies with four cards each, and the Dodgers, Dbacks, and Mets all had three cards.
Two Cub cards was a nice surprise.  In all, it was a very NL-centric couple of packs.