I've cracked a hobby box and a jumbo box of 2015 Bowman, plus I've sniped a couple of nice insert lots from Ebay.  I've already knocked out the paper base set (1-200), as well as the Draft Night and Dividends insert sets. Now it's time to post the want list, which can also be found at the top of my blog as one of the tabs under the header.

I need some serious help with the chrome set (need 70+ cards) and I need a couple of the Scouts Fantasy Impact cards, as well as a half-dozen of the Teams of Tomorrow Die Cuts.

If you have anything you would be willing to part with drop me a line in the comments.
Or, if you'd be interested in the cards from certain teams I'd be more than happy to go through my inventory of '15 Bowman Draft and see what I have in the duplicate department.  The insert lots from Ebay haven't arrived yet, but I'll have some duplicates from those, too!

It feels weird to craft a post and not add any pictures, so here's a snapshot of the four autos I pulled from the two boxes. 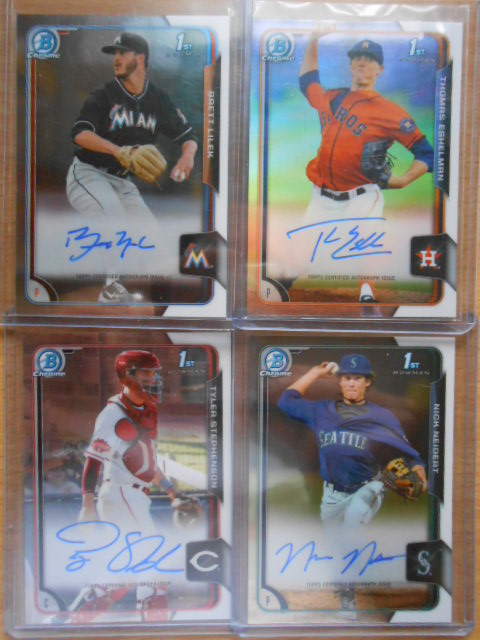 Nothing too amazing there. Brett Lillek was drafted by the Marlins in the 2nd round.  Thomas Eshelman was an arm I was hoping the Cubs would invest in, but they passed and he went in round two the Astros, who then traded him to Philadelphia (h/t Zippy Zappy). Tyler Stephenson, the lone first round pick, is now a member of the Reds, and Nick Neidert also went in the second round to the Mariners.