Ordering Up Some Confusion

I approached Tom, from The Angels, in Order blog, about shipping off all my Haloed Goodness in his direction.  He replied in kind with some Cubs, and he was very kind with what he sent back.

Let's start off with the card that has me most confuzzled. 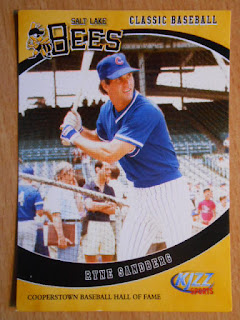 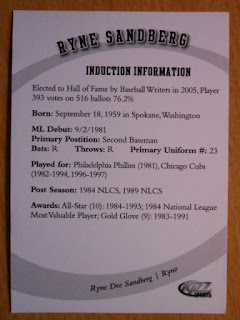 Ryne Sandberg never player for the Salt Lake Bees, but apparently they included him and a couple of other Hall of Fame Cubs (see below) in a set. I don't understand why the Bees would put out a set like this, because most minor league releases are franchise specific. Also, there's no mention of a copyright on the card or a date noting when it was manufactured.  How do I put this into my Sandberg database if there's no date?  Arrrrrrgh! 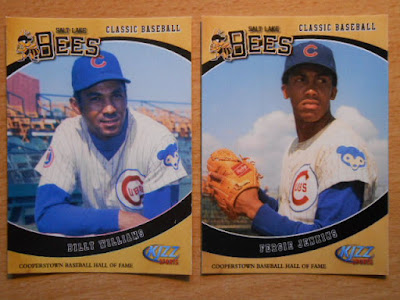 Maybe Tom can shed some light on the origins of these cards?  How about anyone else?

The Wonderbread card is a duplicate, and even with some rounded corners it is in MUCH better shape than the other one in my collection.  The other one had some severe ink smudging on the front, which probably came from the printing press. 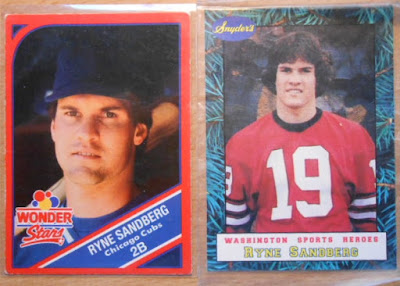 The Snyder's card is from 1992, but the border looks like something from past A&G mini framed relics.  Awesome card overall and number 789 in my collection.

On the left is a 1983 Topps sticker and on the right we have a couple of stamps, but not the postage variety.  The backs are blank so it'll take a little research to figure out when these were made.  This package is making me work! 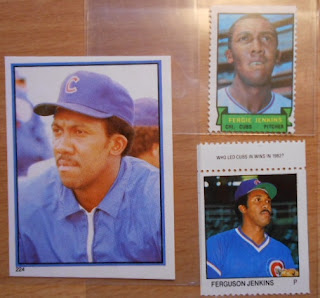 No confusion about this stuff.  Good-sized stacks of Topps cards from 2012, 2013 and 2014.  Each of the cards on the tops of the stacks are new to my collection.  Woo-Hoo!  I desperately need a nice Grimm Reaper card for the Cubs Convention. 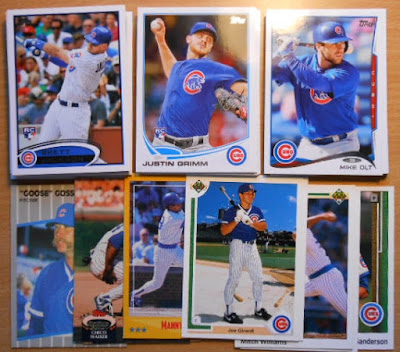 Are you a child of the junk wax era?  If so, you'll have no problem identifying each of the six sets in the bottom row.  On that note, do you consider early Upper Deck and Stadium Club releases to be junk wax?  Neither came in wax packs and were on the higher end of the cardboard spectrum, but they were mass produced.  Just curious to hear your thoughts.

Yes!  A new Fowler!  Theo?  Seriously?  Why haven't you signed Dexter yet? 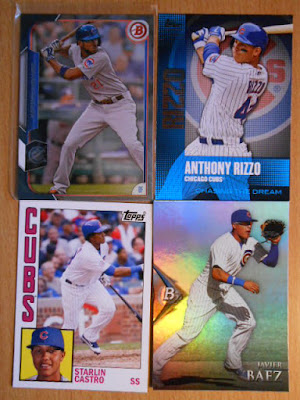 Vintage-esque cards!  Two Rick Monday sighting in two days, which might be a record for this blog. 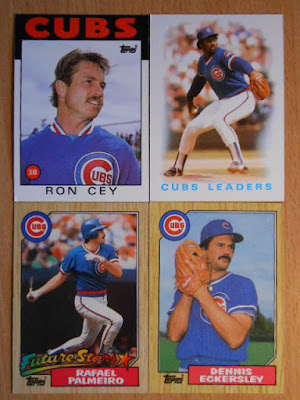 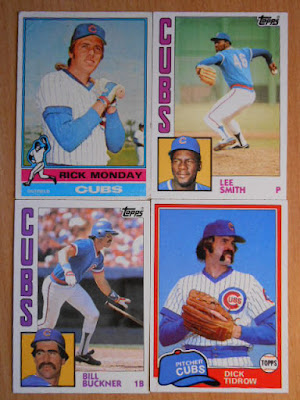 Look at all the mustaches above!  Oh, but here's a better one: 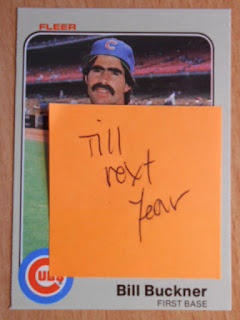 That 'stache is glorious, and there are eyebrows to match!  (Sorry about forgetting to remove the post-it before snapping the picture.)

Lastly, some Cubs stickers for the front page of my binders.  Great! I'm hoping to get a new binder for Christmas from my family and I'll need a new Cubs page in the front.  These three will come in handy for sure.  I like how they're all different.  Nine different stickers for the page . . . that's always the goal! 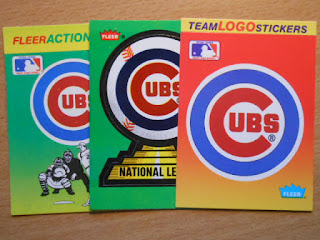