The Postman "Took Care of It"

I received a package in the mail the other day, sometime between Christmas and New Year's, and it caught me by surprise.  You see, during the second week of November I received one of those little pink notes that said, "We're holding your package hostage until you cough up the due postage."

Usually they give me a little envelope in the mailbox and I put the change due in there and I get the package the next day.  This time they wanted me to come to post office and bail it out of yellow bubble-mailer jail.  So, I relented and tried to post bail, but they couldn't find my package.  Huh.  Oh, well.

I didn't think anything more of it as I assumed it was being returned to the sender, and the clerk at the post office to did not disagree with my hypothesis.

Then literally five weeks later the package in question was delivered with a note: 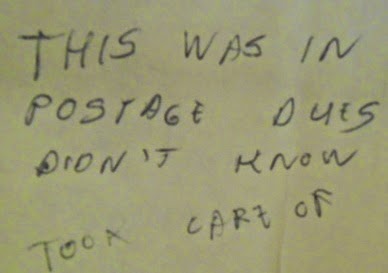 I actually caught my mail delivery person at the mailbox the next day and tried to settle my tab, but he repeated, "I took care of it. It's the holidays."  Coincidentally, he had rosey cheeks and a nice white beard.  No, I'm not kidding. Rosey cheeks and a white beard.

Again, wow.   I had to share my feel good story, because I know there's been a bunch of less than perfect "run-ins" with USPS personnel around the blogosphere.

Anyway, here's a quick snap shot of the cards in the package.  I absentmindedly thought I already received these cards and I already thanked the generous blogger some time ago.  I assumed I filed the cards away already; those who know me well know my organizational skills are a little on the OCD side.  Obviously, I now need to work on my record keeping skills. 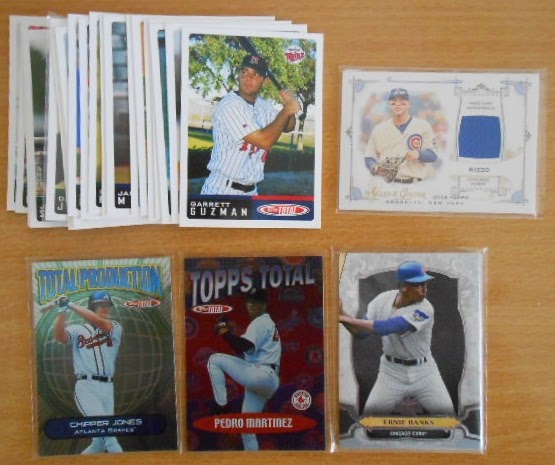 For what it's worth, the Banks and Rizzo relic were both throw-ins and both fit perfectly within my collection!

Also, it's not everyday you get help on a set over a decade old!   Thanks again to the blogger for the 2002 Topps Total set help; only 55-cards more to go!  And a shout-out to my postman!