I haven't been in the mood to post much as of late.  But, in the mail today I found a PWE from everybody's favorite Zipster.

What was inside?  Hah!  A full pack of cards!

Nothing like another edition of "Pack Wars" to get the blogging juices flowing again!

On the left, weighing in at a purported 4 cards, we have a repack of 2013 Panini Prizm Draft Picks from Zippy Zappy. 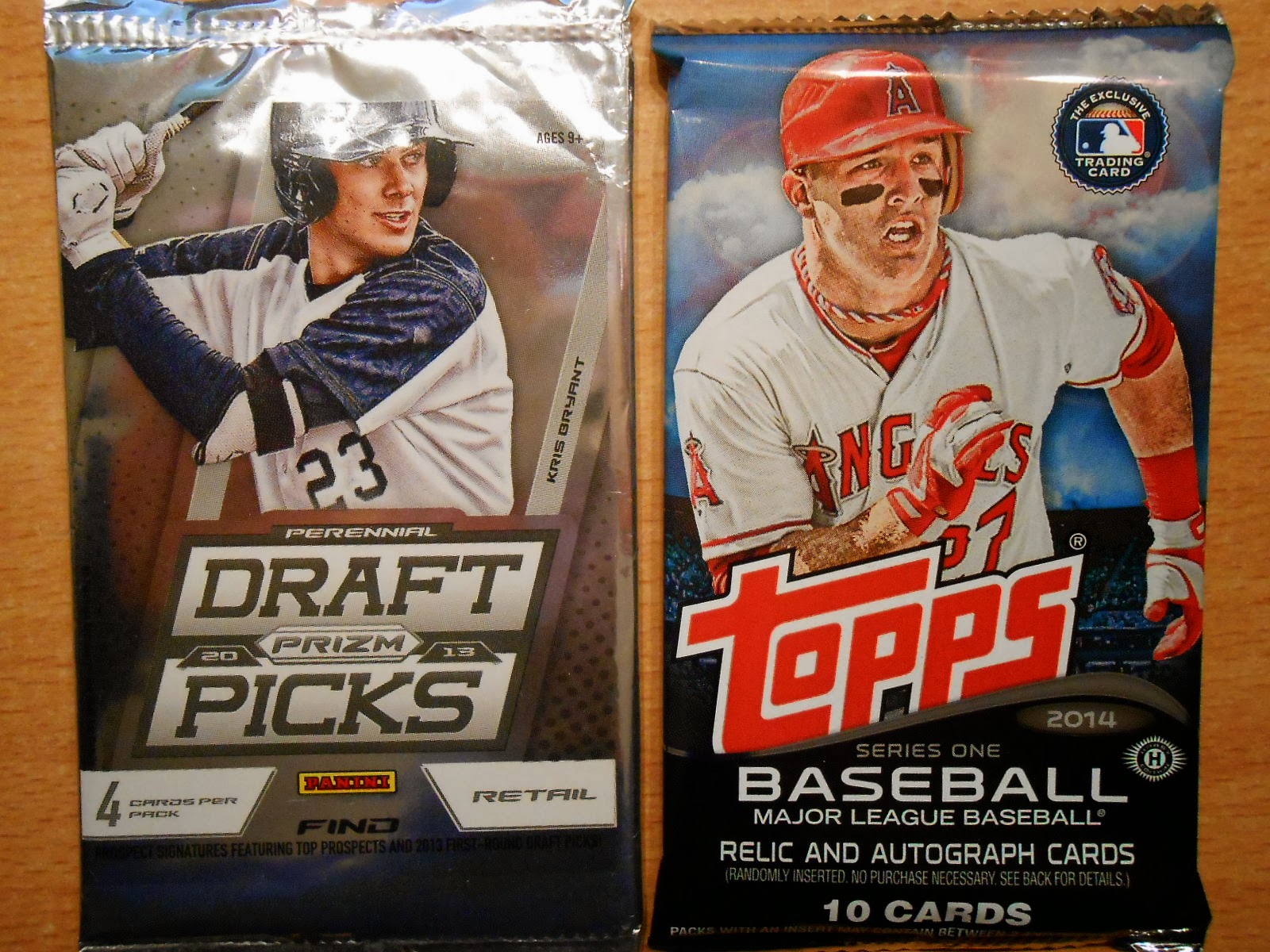 On the right, we have my second AND last pack of 2014 Topps flagship that I have purchased.

Zippy Zappy's repacks always pack a punch, so we'll pit three Topps cards against 1 Zipster card.  The last Topps card, the insert in this case, will face the final Zippy Zappy card in the last round. 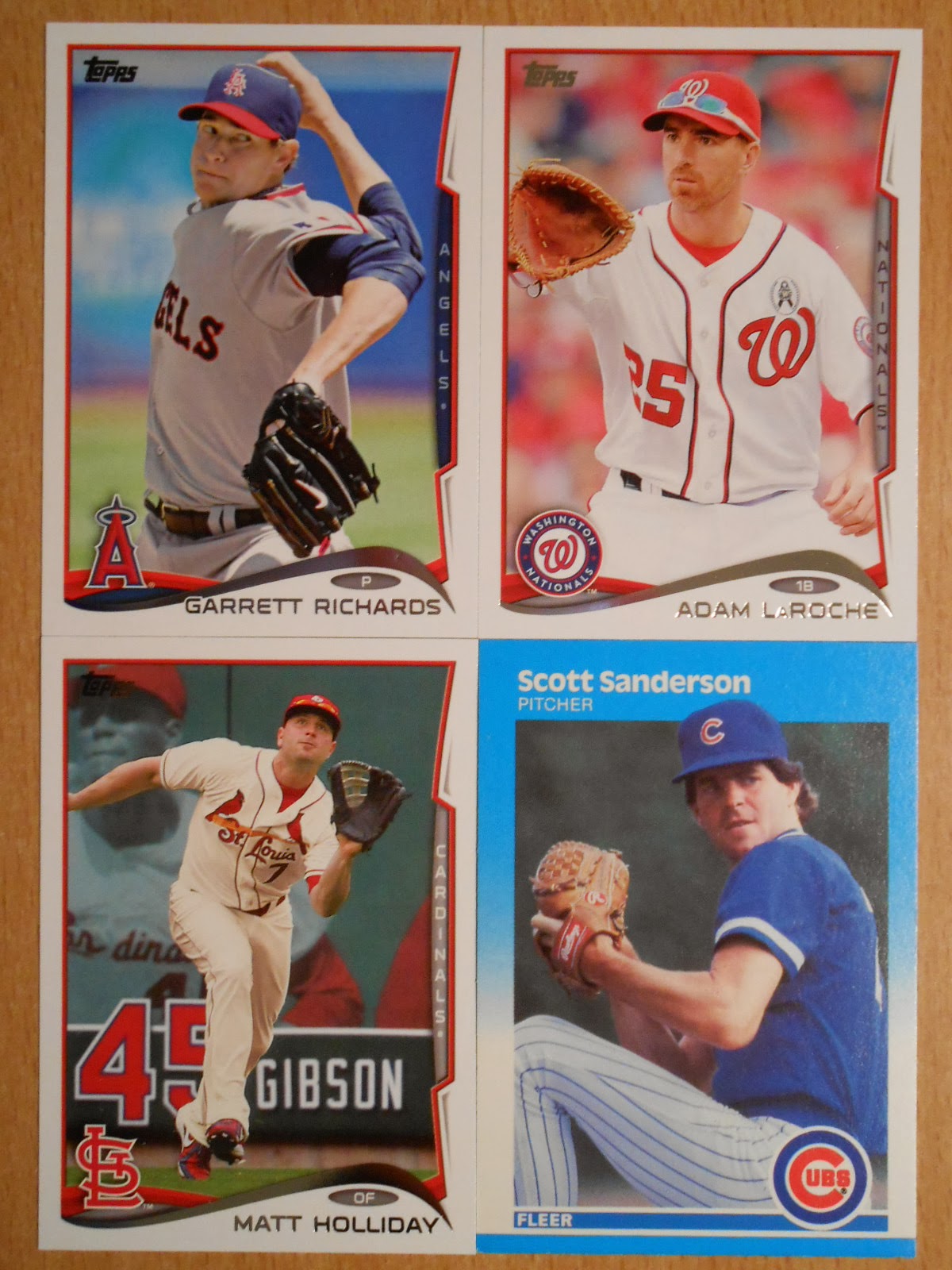 The Pack War is off to a rough start.  Not much star power from either side, unless you count Matt Holliday.  Holliday's a Cardinal though and if anything he brings negative value to Topps' effort.

Wait, there's been a change of plans.  The insert is a little thick and there's only 8 cards in the pack.  The Zippy Zappy pack catches a break and now it only has to face two cards in each of the next two rounds, but Round 4 could be a doozy!

Charlie Morton?  Nope, no value added to the pack.  But we do have an awesome shot of Jeter and Pettitte taking out Mariano Rivera to a standing ovation in front of the Yankee Stadium faithful.  What a great card.  I have about 10 to 15 cards from each team that make me smile.  This one joins them. 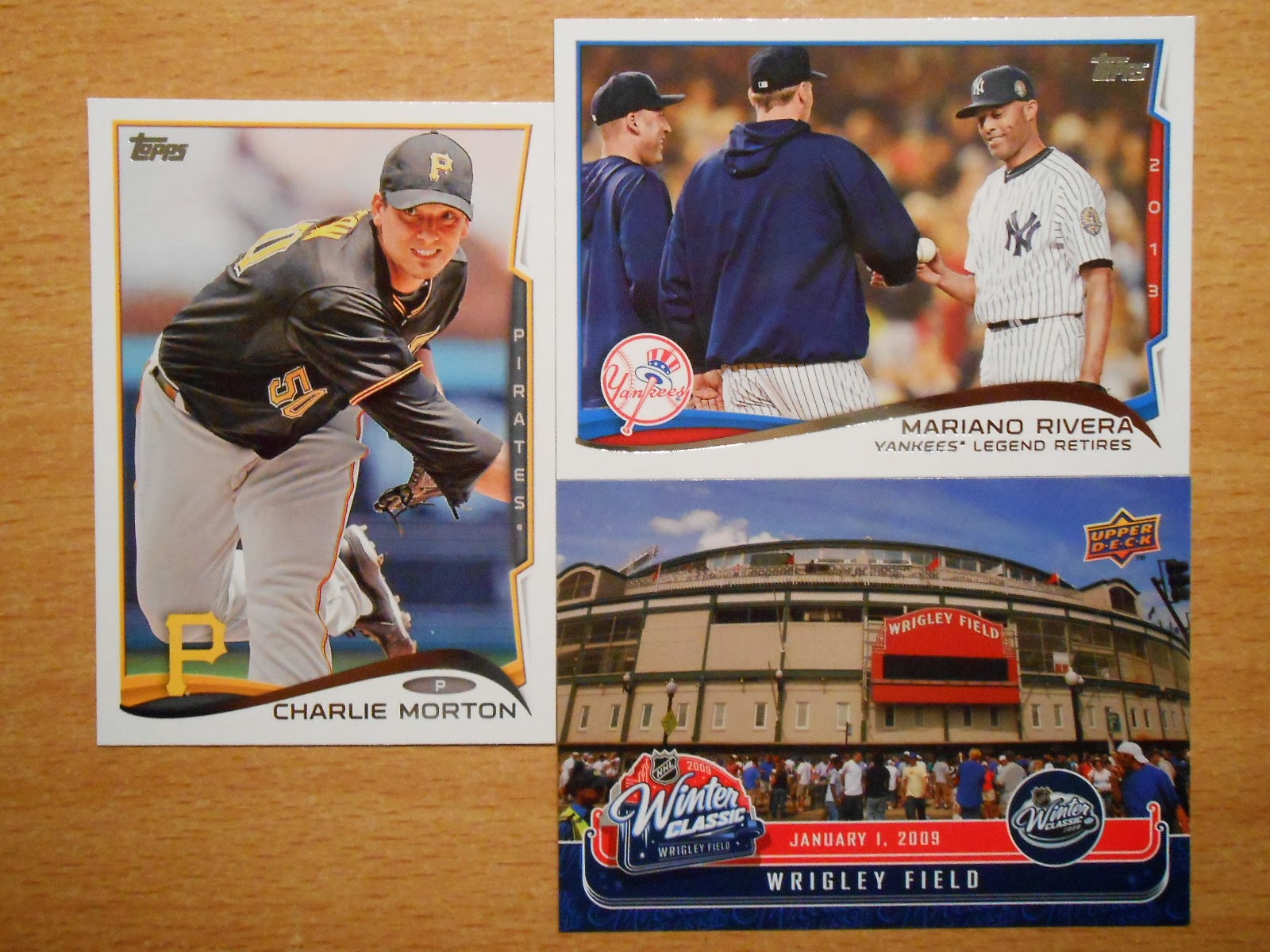 The Zippy Zappy card?  An Upper Deck card commemorating the Winter Classic at Wrigley Field. This card will definitely find a home in my binders as I have a whole page of Wrigley Field cards.  Yet, being binder worthy isn't enough to steal a victory this time.  I like the Rivera card that much.

Two men wearing the tools of ignorance versus the 304th different addition to my Kerry Wood collection: 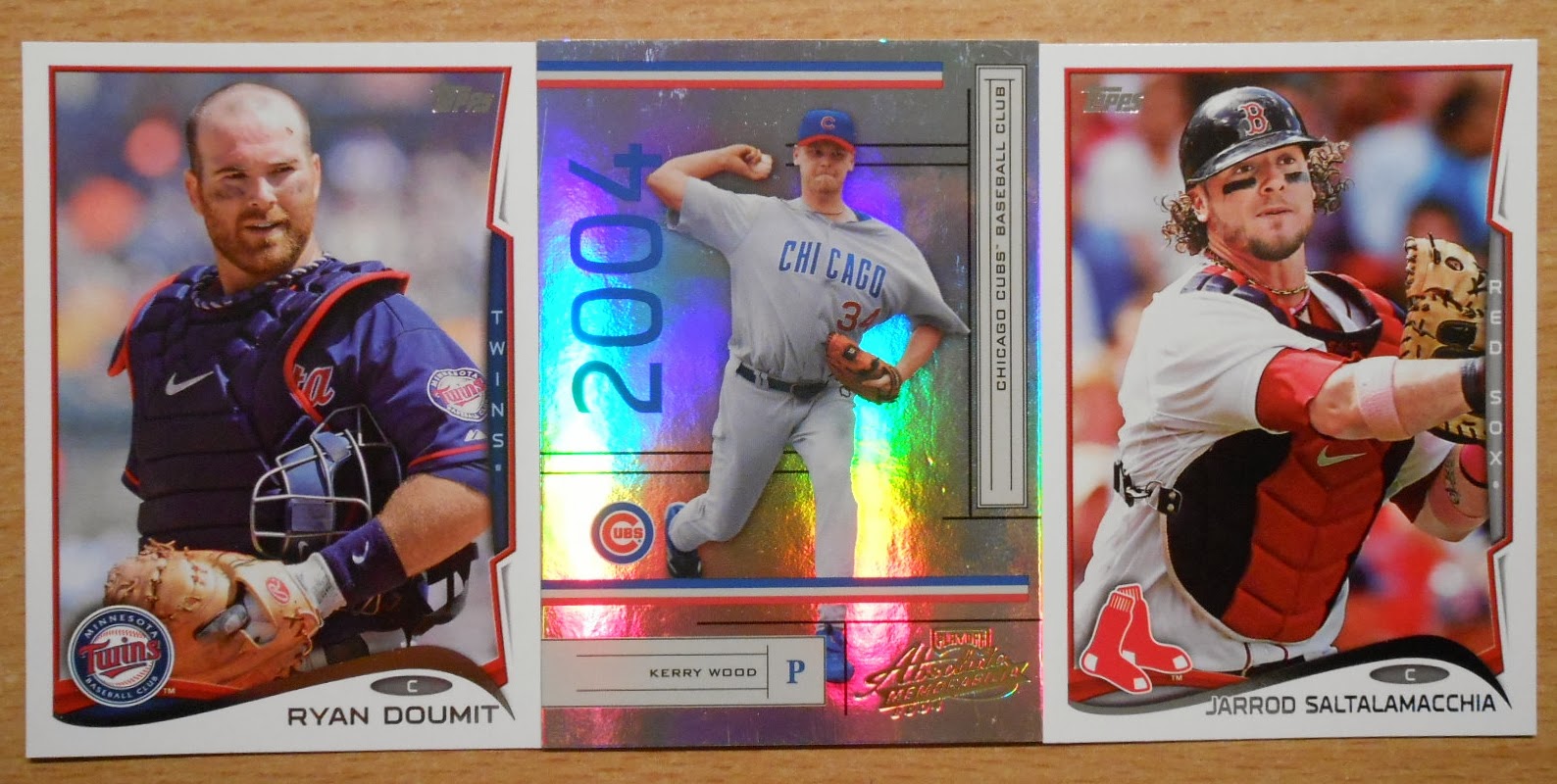 If I were PATP this one might be scored differently.  The judges had already made their decision when they discovered the back of the card was serial numbered!  Bonus! 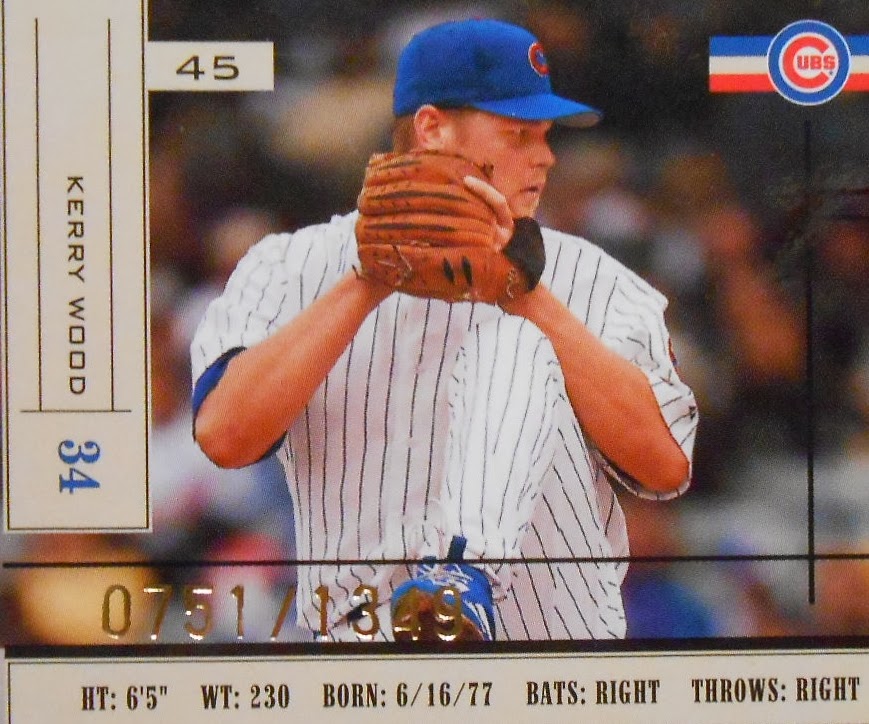 Zippy Zappy is back on top!
Zipster: 2
Topps: 1
The final round pits the thick Topps insert versus vintage! 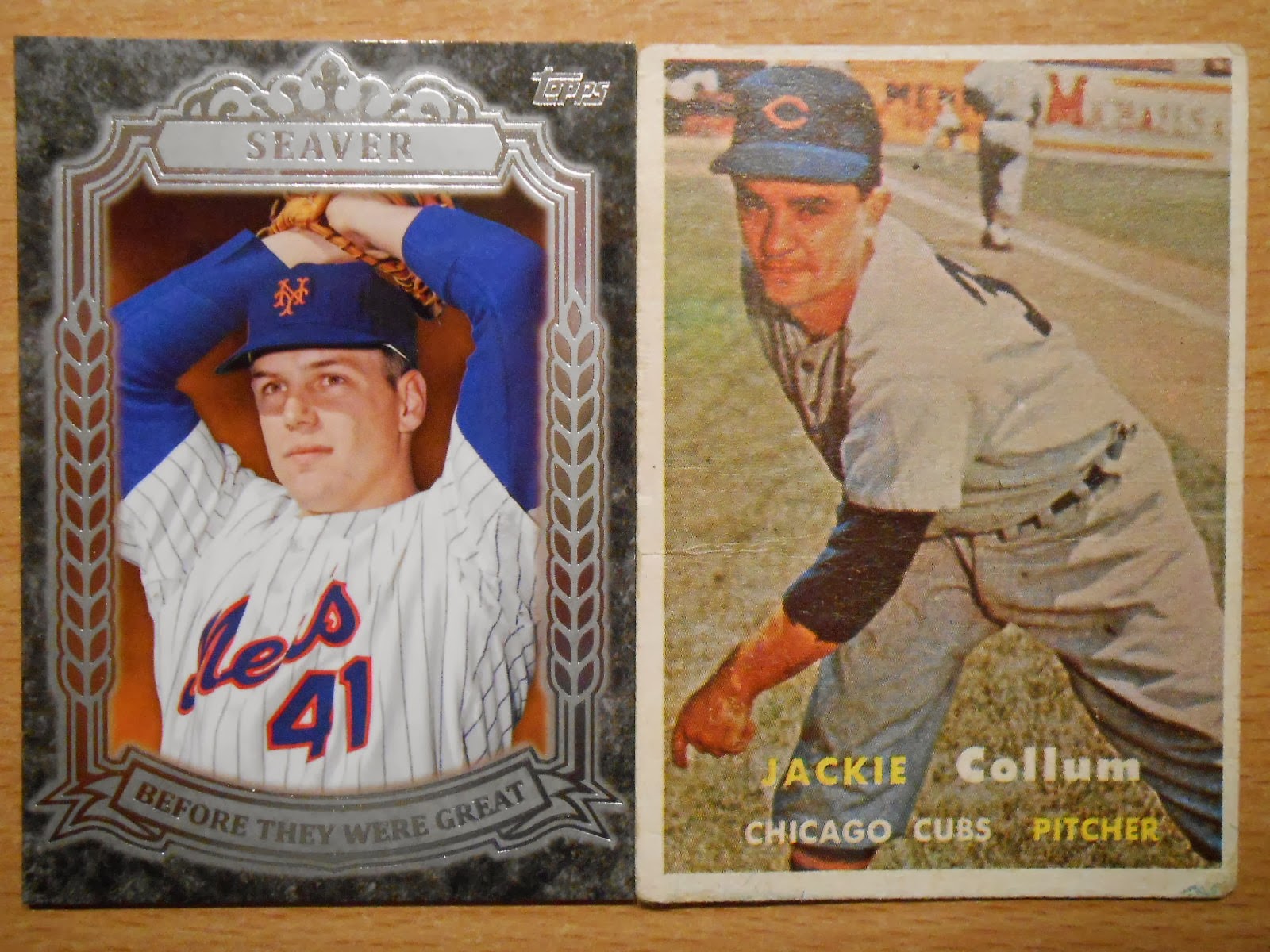 Career wise, I don't think there's much of a comparison here.  But this 1957 card of Jackie Collum is only the third '57 in my collection.  Tom Seaver?  Yeah, he was on the 1969 Miracle Mets that stole the pennant away from my Cubs, a negative for sure.  But, man, he was a darn good pitcher, and Collum spent most of his career as a Cardinal.  On the other hand, the vintage has rounded corners and nice crease through it (visible to the left of Collum's elbow).  Both are pluses in my book, especially on a card that will soon be 60 years old.
Why is the "Before They Were Great" cards on really thick card stock?  This doesn't make sense to me.  Now I have to go track down a larger top loader.  Sigh.  That one has tipped the scales...