My Trip to the Cactus League

Ten years ago was the last time my school district's spring break was scheduled for March.  What does a baseball loving fan do on such rare occasions?
Yep, a four day stay in Arizona to catch some sun and see my Cubs!

My companions for the trip were my sister, Jane, and my baseball-loving friend, Jim.
We arrived late on Friday, March 21st, and were to excited to sleep.  Saturday morning arrived too quickly, but that didn't stop us from heading to the game.  Highlights included:
1. watching Javier Baez play his own game of Home Run Derby during batting practice
and
2. Jim bought a $30 mystery baseball for charity from the players' wives.  It was autographed by Travis Wood and Jim got his picture taken with Mrs. Travis Wood.
3. Logan Watkins, a former Peoria Chief, smacked a triple.  We cheered incessantly for him!
4. Billy Hamilton also hit a triple.  Here's my understatement for the month: "Billy Hamilton is fast."

Below is shot of one of the many maps found around Cubs Park.  If you look closely you can locate where I was standing when I took this picture. 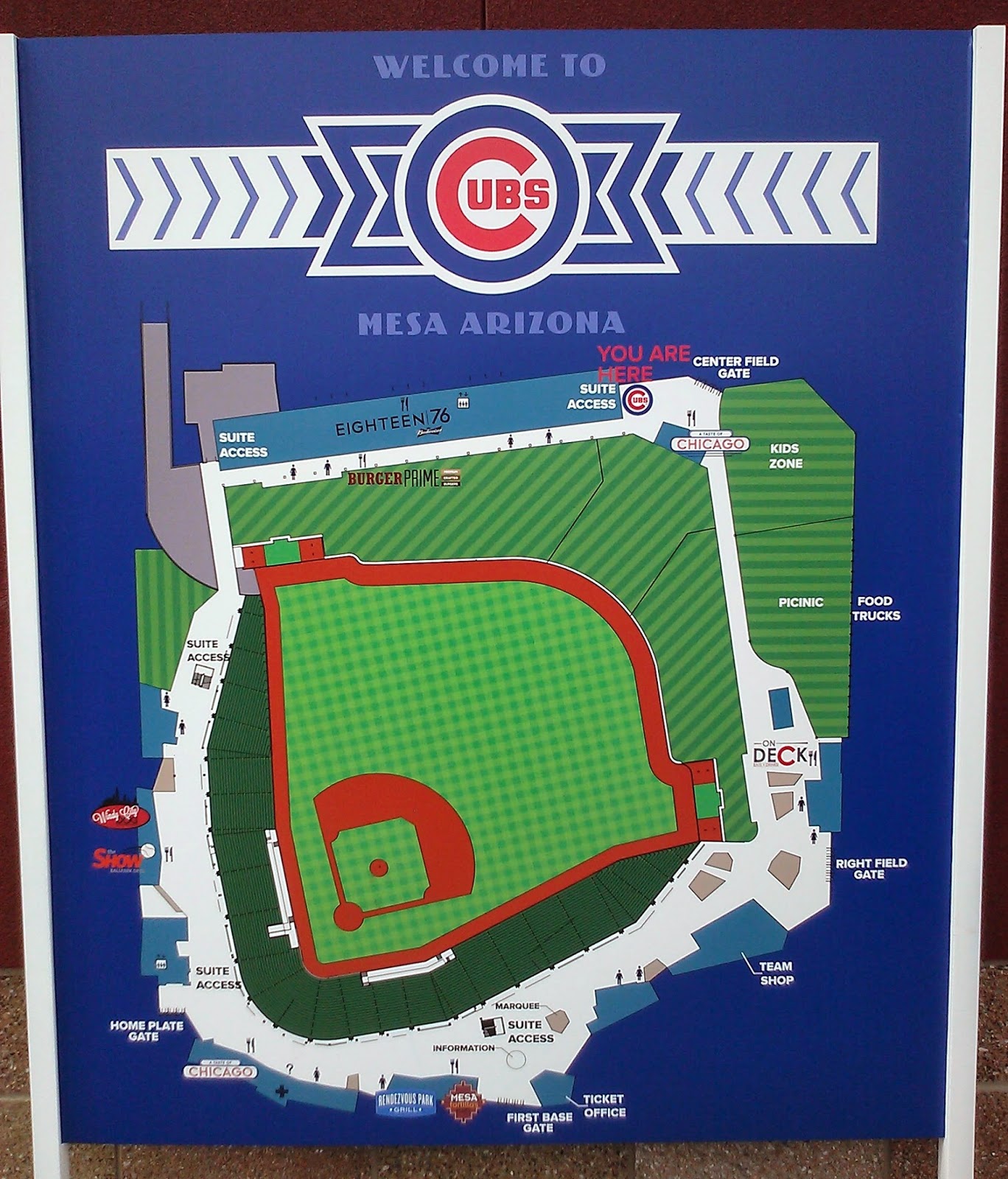 Sunday morning I awoke early to get my long run in before the temperatures became too warm.  I'm training for a half marathon at the end of April.  Why do I commit to such things?  No matter, here's a couple of shots of what I spotted on my run: 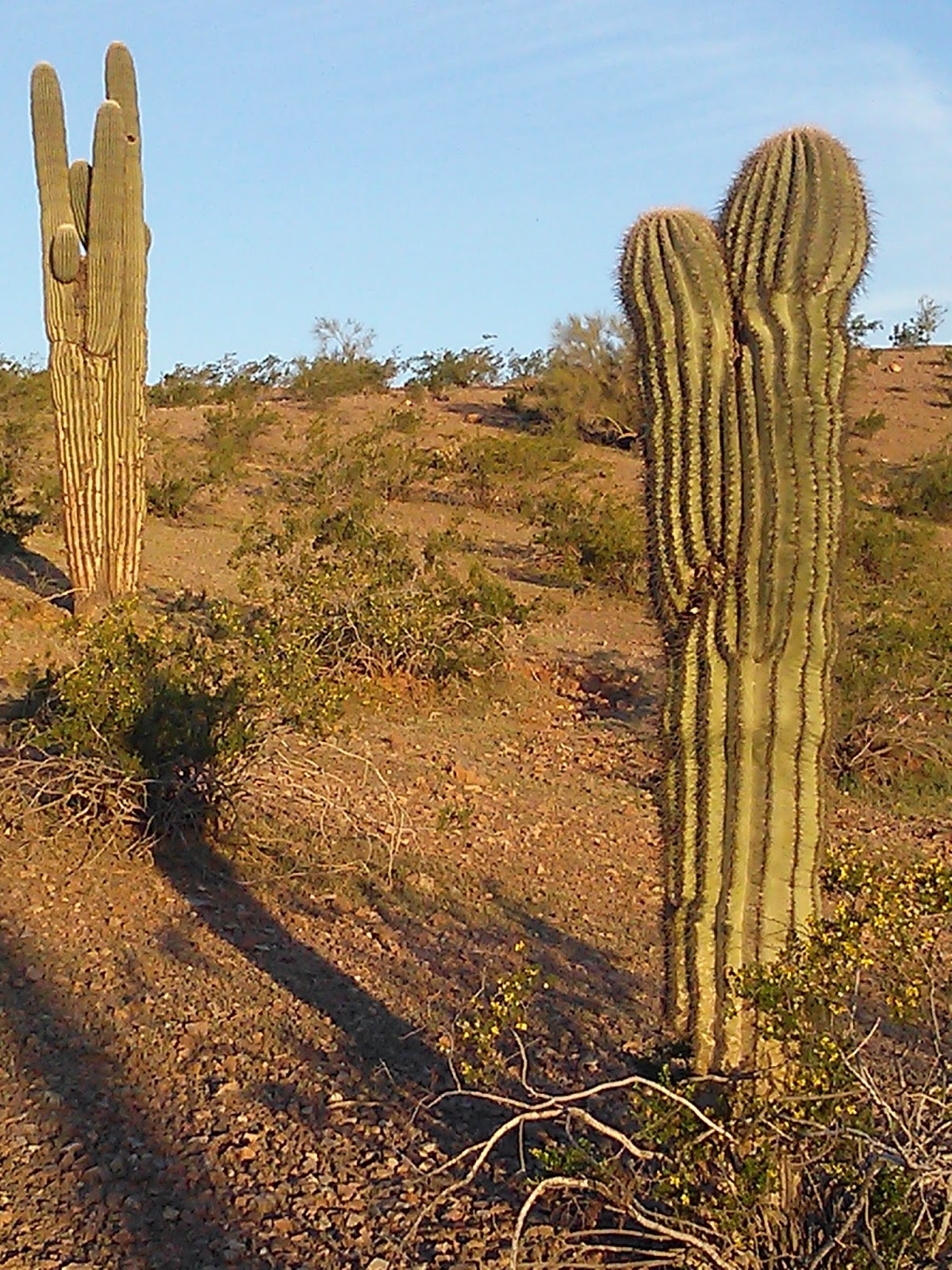 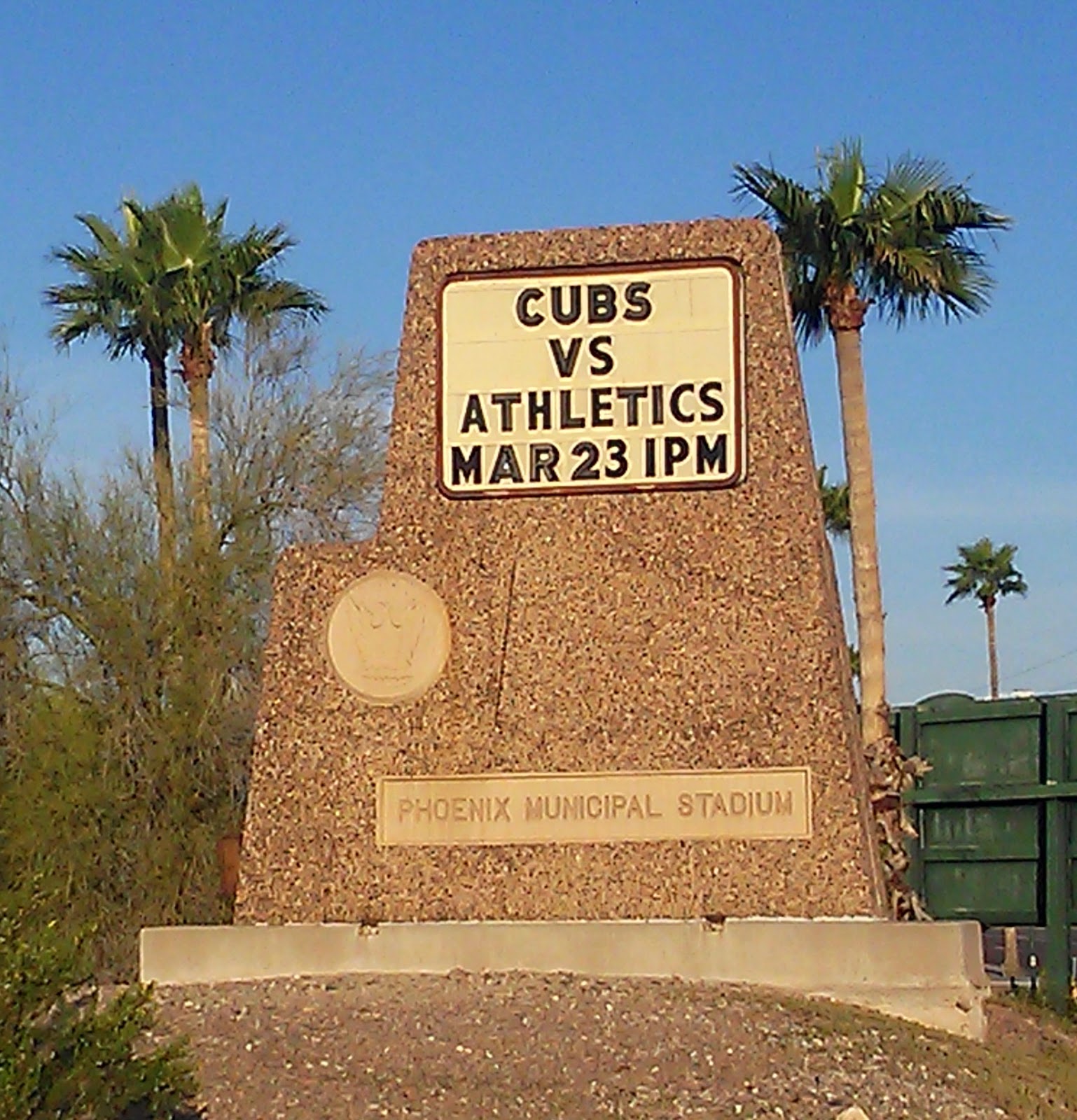 Just ten minutes into my 6.7 mile excursion I was surrounded by rolling hills and cactus.  My turn around point was just a bit further than the sign board outside Phoenix Municipal Stadium. 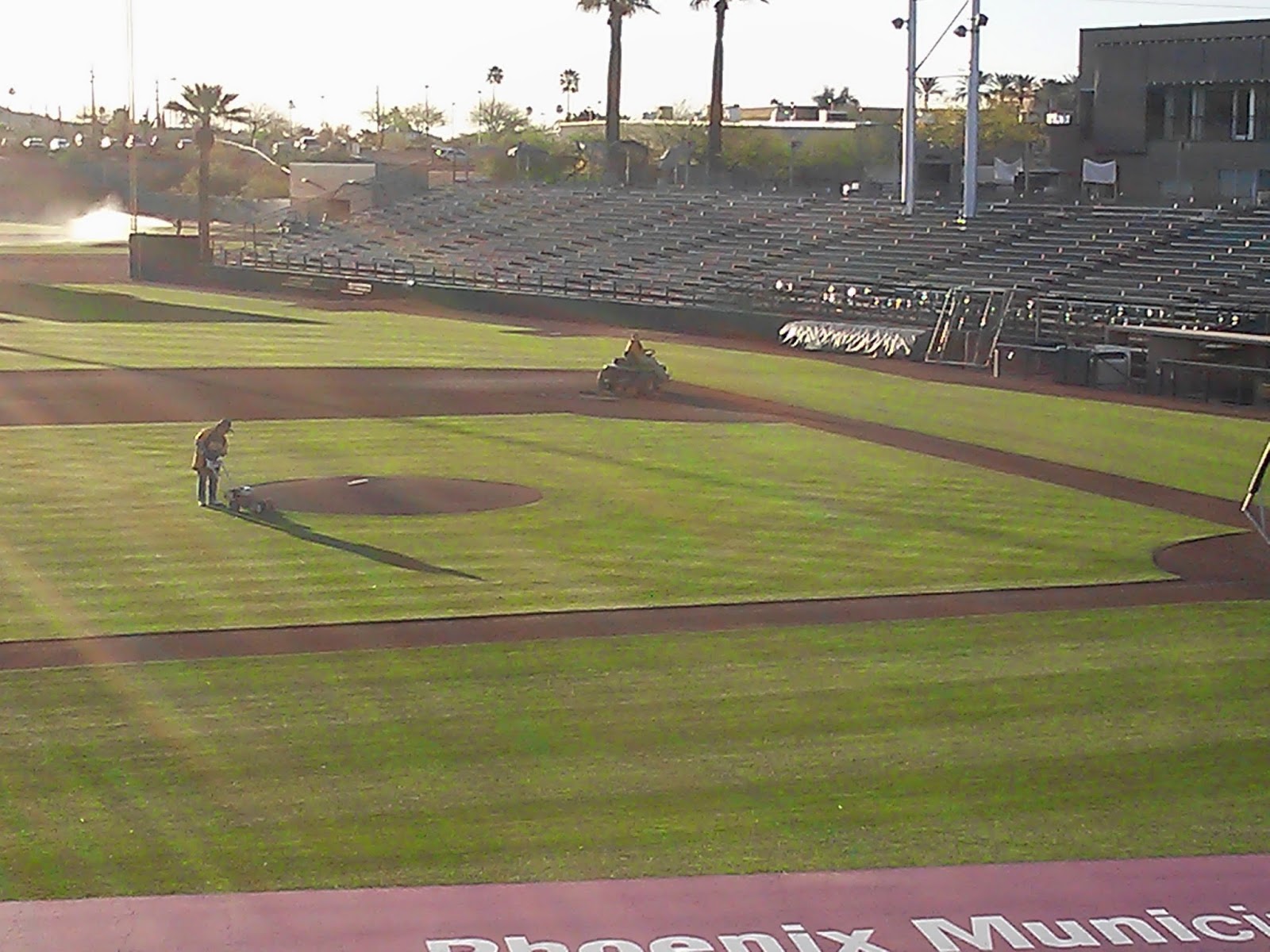 Here's where I turned around!  Seven o'clock in the morning and they were already preparing the field.  Six hours later we tried to find refuge in the shade of the palm trees down the right field line.

It was a hot day and a little miserable, but then the bats woke up. We witnessed Junior Lake, Luis Valbuena, and Mike Olt combined for six homers and defeated the Athletics. 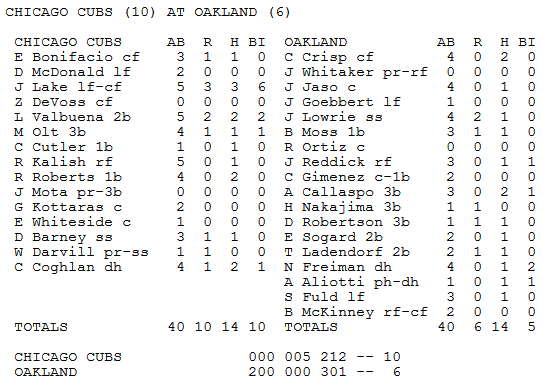 Lake hit homers in his last three at-bats and Valbuena went back-to-back with him in two of those plate appearances.  Olt's homer was probably the longest of the six.  Lots to cheer about!

That evening we went out with Shane, the Double-A trainer, and his girlfriend for dinner.  Jim has befriended Shane on his three trips to Cubs Fantasy Camp.  I loved hearing stories about "baseball life" and Shane offered up plenty of insight and anecdotes.

Monday started out interesting, as we were locked inside a local baseball card store while the owner went next door to supervise his other business, a laundromat.  It was a pretty nice store, which contained twenty 4,000-count dime boxes and vintage cards! (Hat tip to It's like having my own Card Shop for the card shop suggestion.)
I'm planning another post to show off the baseball cards from the trip.  Be patient!

Jim, Jane, and I took in the Cubs' Triple-A game after lunch at the practice fields.  Here's a shot from earlier in the trip of two of my favorite minor league players during a morning practice.  ROCK SHOULDERS is the foreground and Dan Vogelbach is looking our way! 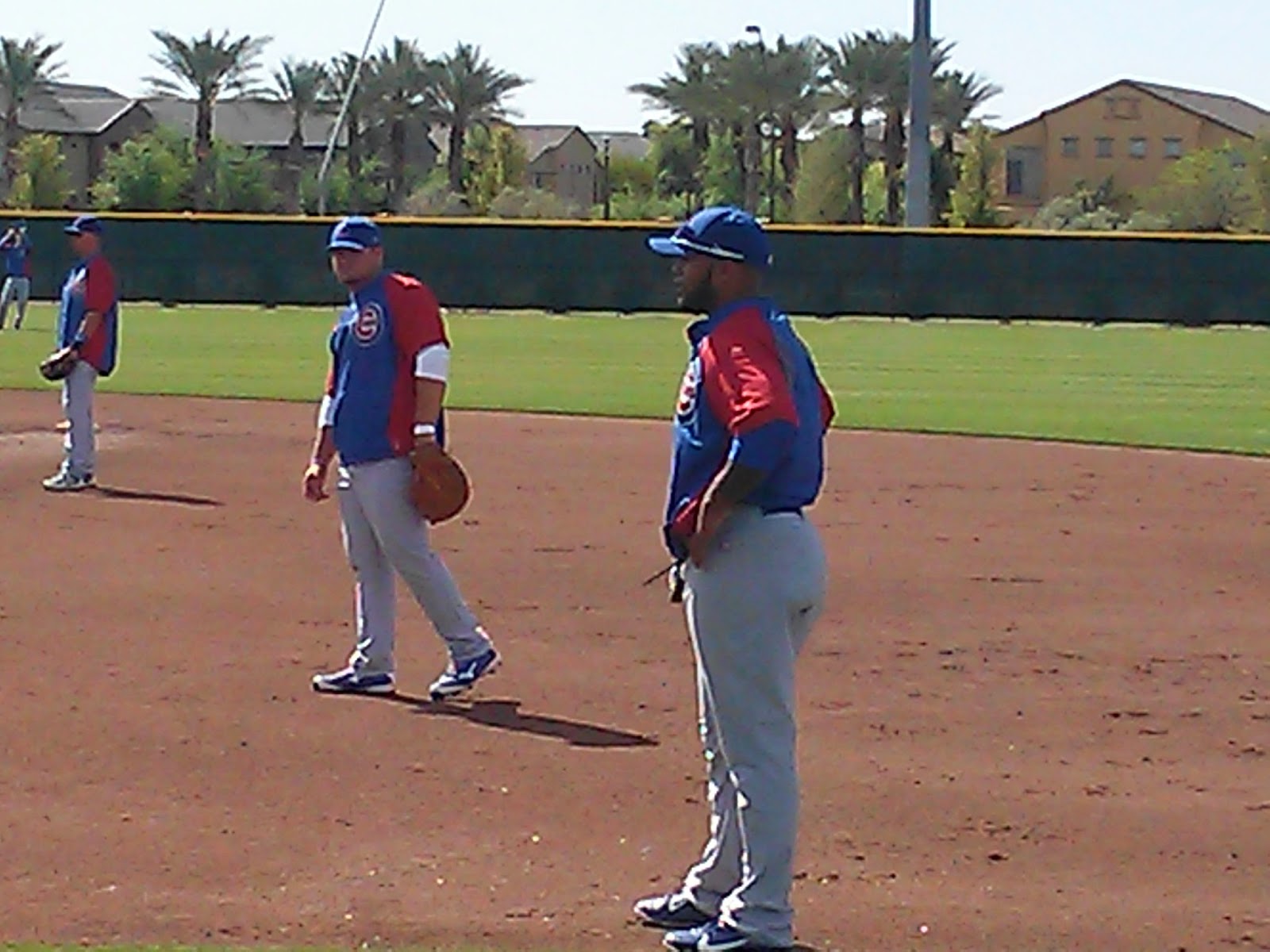 What a sweet deal the minor league game was!  Free parking, no tickets to buy, and baseball players were mingling about everywhere!  The I-Cubs beat Danny Salazar and the AAA-Indians by the score of 7 to 2. We even bumped into Theo Epstein! Holy Smokes!  I shook hands and got my picture taken with my man crush!
I apologize for the overuse of exclamation points.  I was just a little* excited.

That night we attended the first ever night game at Cubs Park.  The major league team lost again (7 to 1 to the Padres), but there was a nice fireworks show after the game.  Oh, and here's a view from our seats: 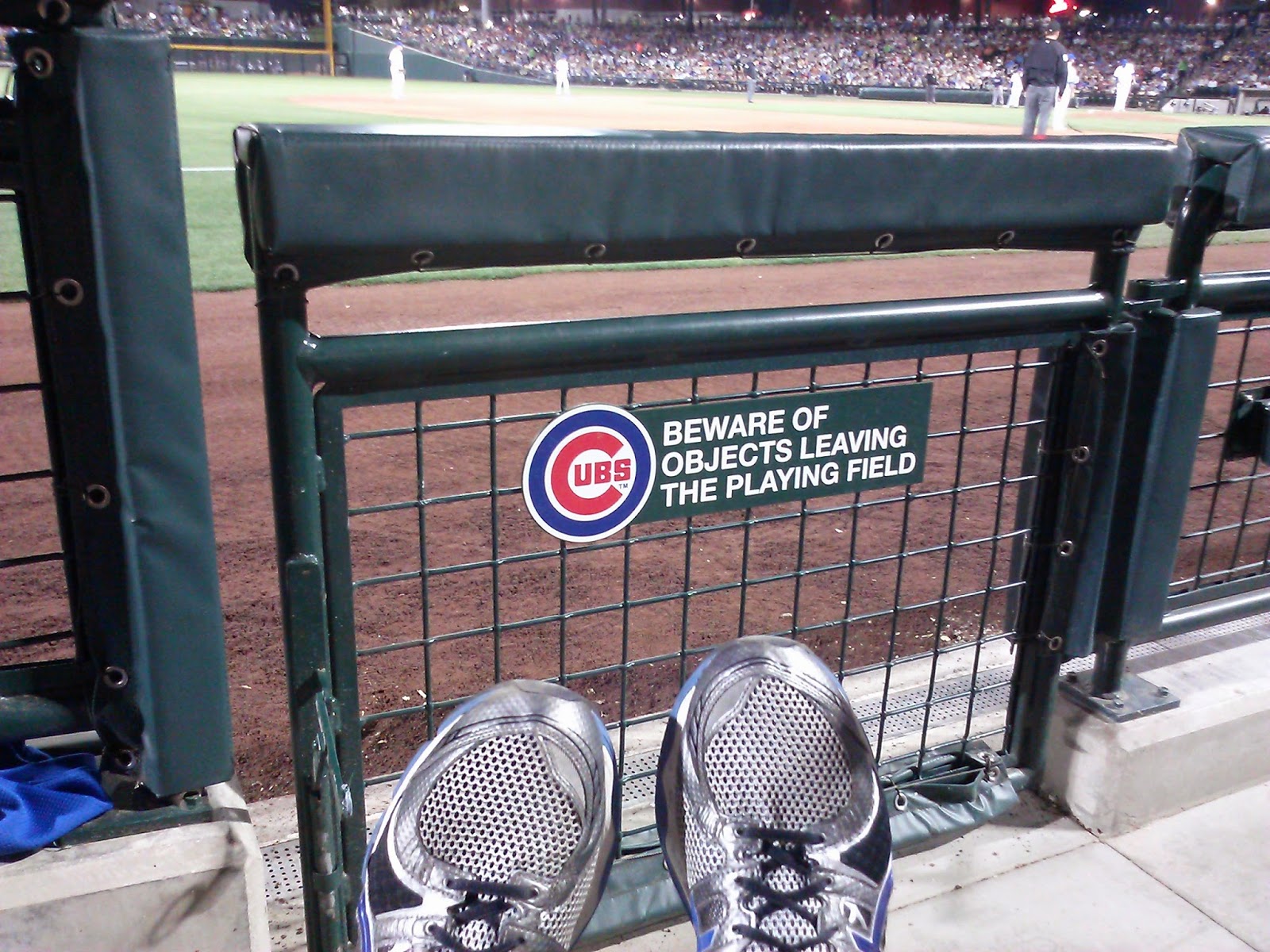 I was hoping for a chance at some of those "objects", but we were never fortunate enough to have a ground ball scoot our way.  I've never sat in the first row at an MLB game.  For $24?  I'd do it all over again! 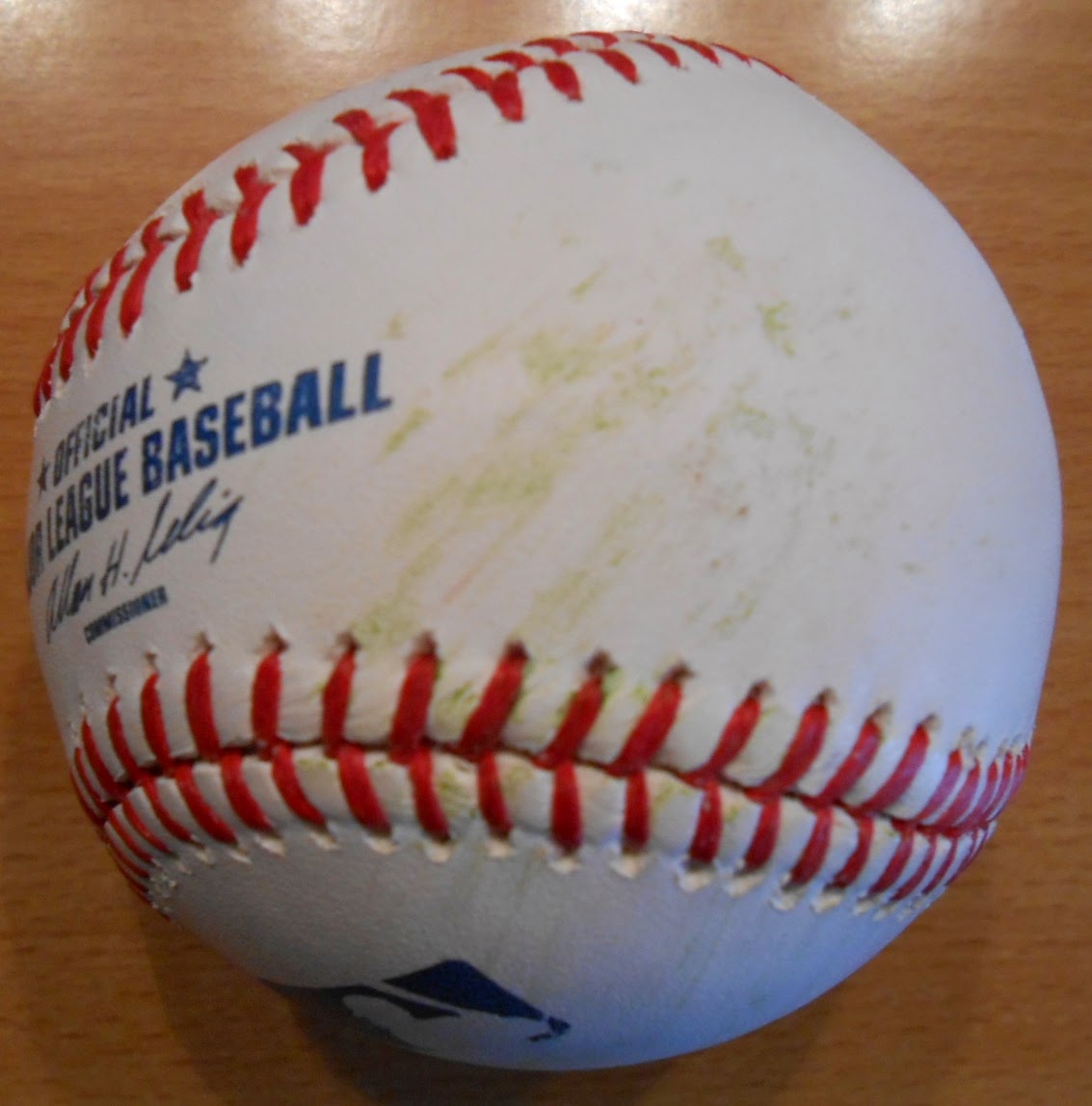 Tuesday was our last day in the Valley and we were set for one more day game.

We got to the park early for batting practice and my sister and I were each able to score batting practice homers!  I've never done the "ball hawk" thing before.  Fun, but a little dangerous: the ball just seems to drop out of the bright Arizona sky from no where!

As you can tell from the picture I didn't catch the ball.  No shame in being the first one to track down a ball in a mad scramble!

The Cubs broke the Cactus League record for single game attendance during the game with 15,276 in attendance.  The Cubs now hold the top eleven spots in the record book, plus they crushed the MLB home game spring season attendance record with 213,815.  The previous record was 203,105.   The Cubs averaged 14,254 fans per game, which dwarfed the old mark of 12,125 set by the club in 2005.  I'm proud to help contribute to the records!

I must add that the park was packed with fans, but it was also MUCH easier to get about and exit than Wrigley Field.  The front office and the architects did things right.  A terrific fan experience! 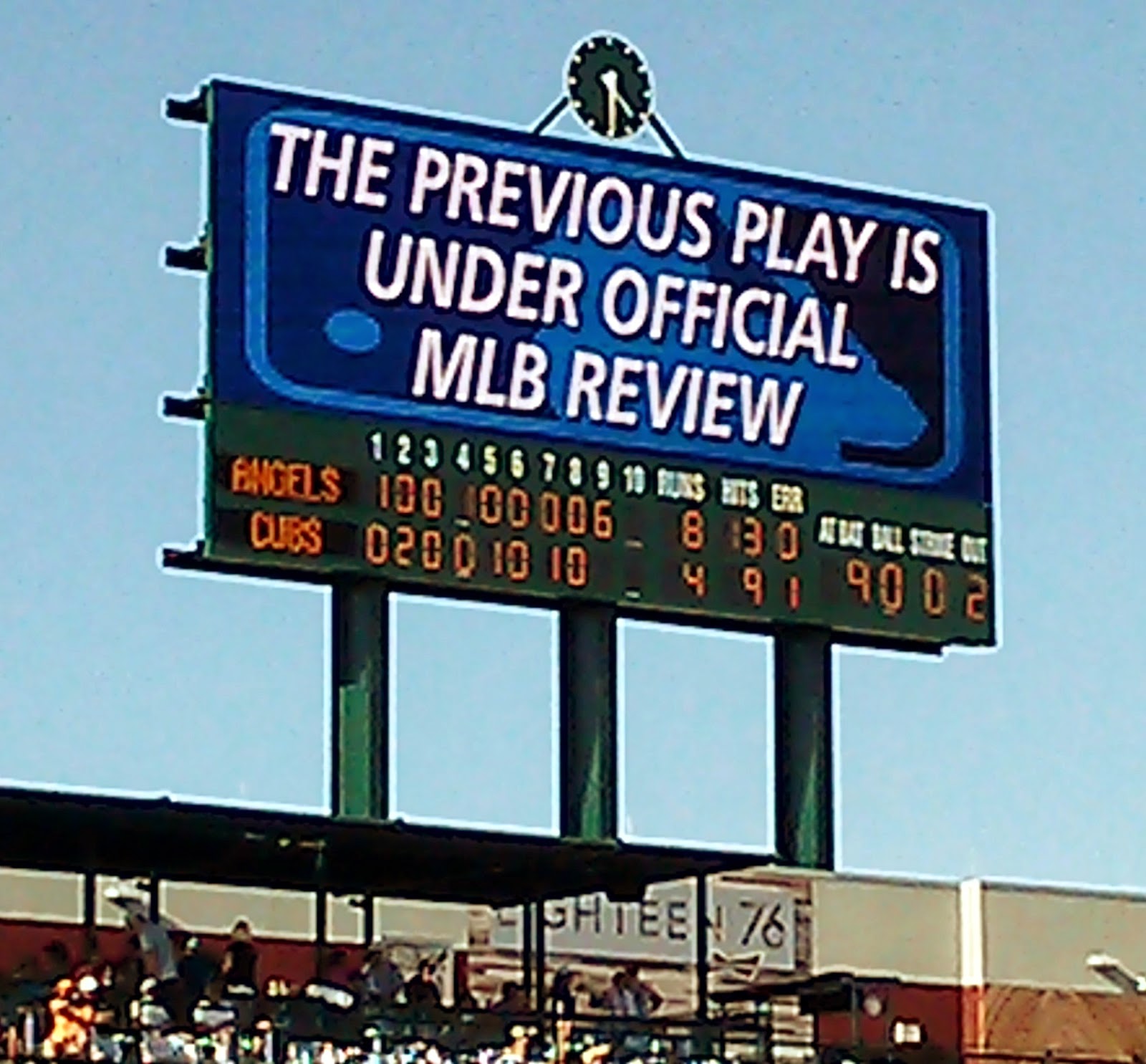 Back to the last game: as you can tell from the picture the Cubs had a nice two run lead going into the ninth, but when you use your closer in the 5th and your set-up man in the 6th inning... well... yeah.  It's spring training.  What's a fan to do?

I think we saw three "Official MLB Reviews" take place on our trip.  Rick Renteria, the new manager for the Cubs was responsible for instigating this challenge.  We were sitting way down the left field line for this game, but I swore I heard Renteria say, "I'd like to challenge the entire top of the ninth."

After the game we hit Dave & Busters, had a nice dinner, and retired early so we could catch our plane early the next morning.

Overall, it was great to get away from the dreary and cold forecasts of Central Illinois, hang with two of my favorite people, and stuff in as much baseball as possible within a four day period.

So what if the Cubs only registered one win in four games, and we were denied the playing of "Go Cubs, Go" at home all three time games?  The Triple-A team won a game, and I was just as excited to see them play, because that roster was stacked with talent, which we'll hopefully see before too long.

Besides, with the internet I can play "Go Cubs, Go" whenever I want.
Thanks for stopping by for my lengthy spring vacation recap!

(* somebody needs to invent a sarcasm font)