I pulled a pretty rare black refractor from my two packs of 2014 Heritage the other day, thus I saved the Donruss packs I purchased at the same time for another day's post. Today is that day! 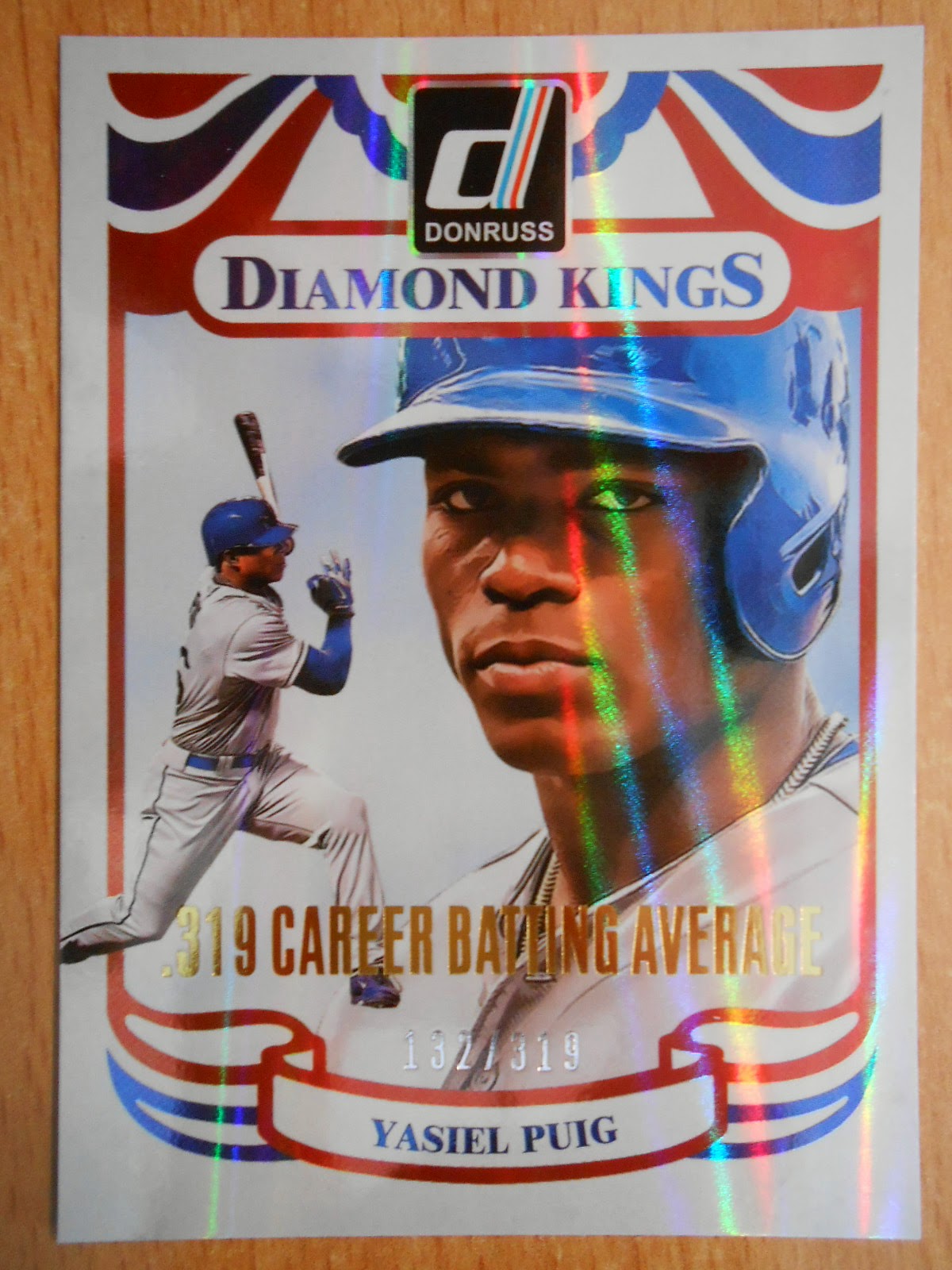 Mr. Puig, here, isn't as rare as a serial numbered card to /65, but he does have his own number:132/319.  He's super shiny, which I'm normally a fan of, but all all the other Diamond Kings in my collection are anything but shiny.  It just seems wrong.

Speaking of things that aren't quite right...  I know this has been stated before on the Blogosphere, but I wish the Diamond Kings were painted.  I realize Dick Perez, the original artist, probably wasn't available/interested, but there are plenty of other artists out there looking for work. 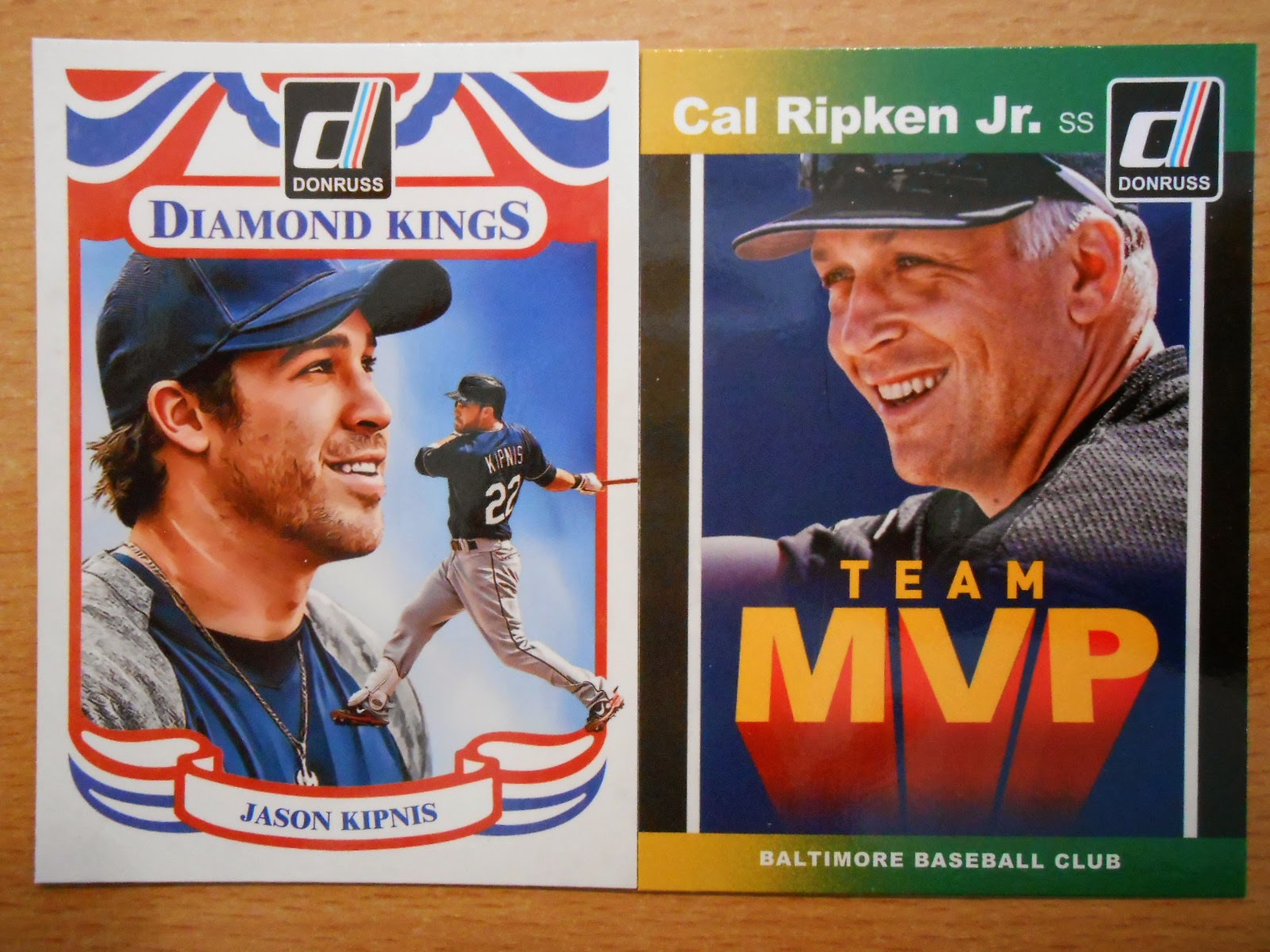 The Diamond Kings are modeled after the 1984 set and the Team MVPs are in line with 1989 set.

Below are a couple of images I stole from eBay so you can compare: 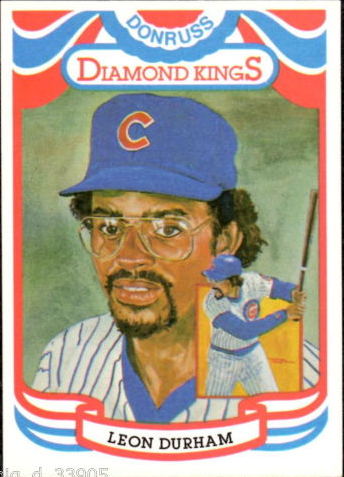 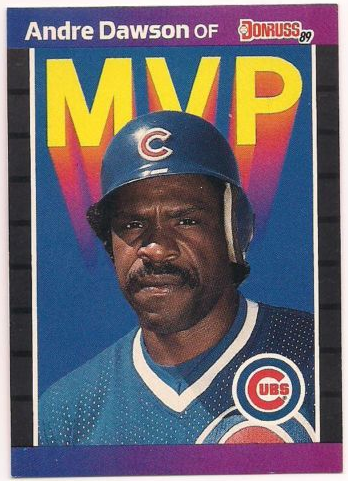 The sides of the cards remind me quite a bit of the 1987 version.  Bo knows what I'm talking about. 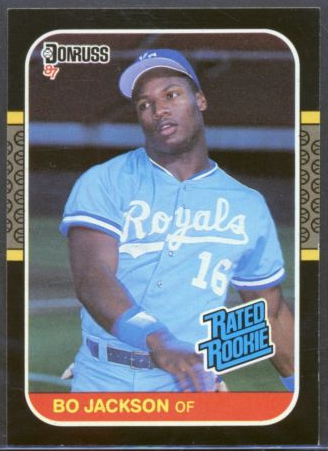 The logo used on the 2014 product is from the early '80s.  Outside of those two details, there isn't a whole heck of a lot I can place. 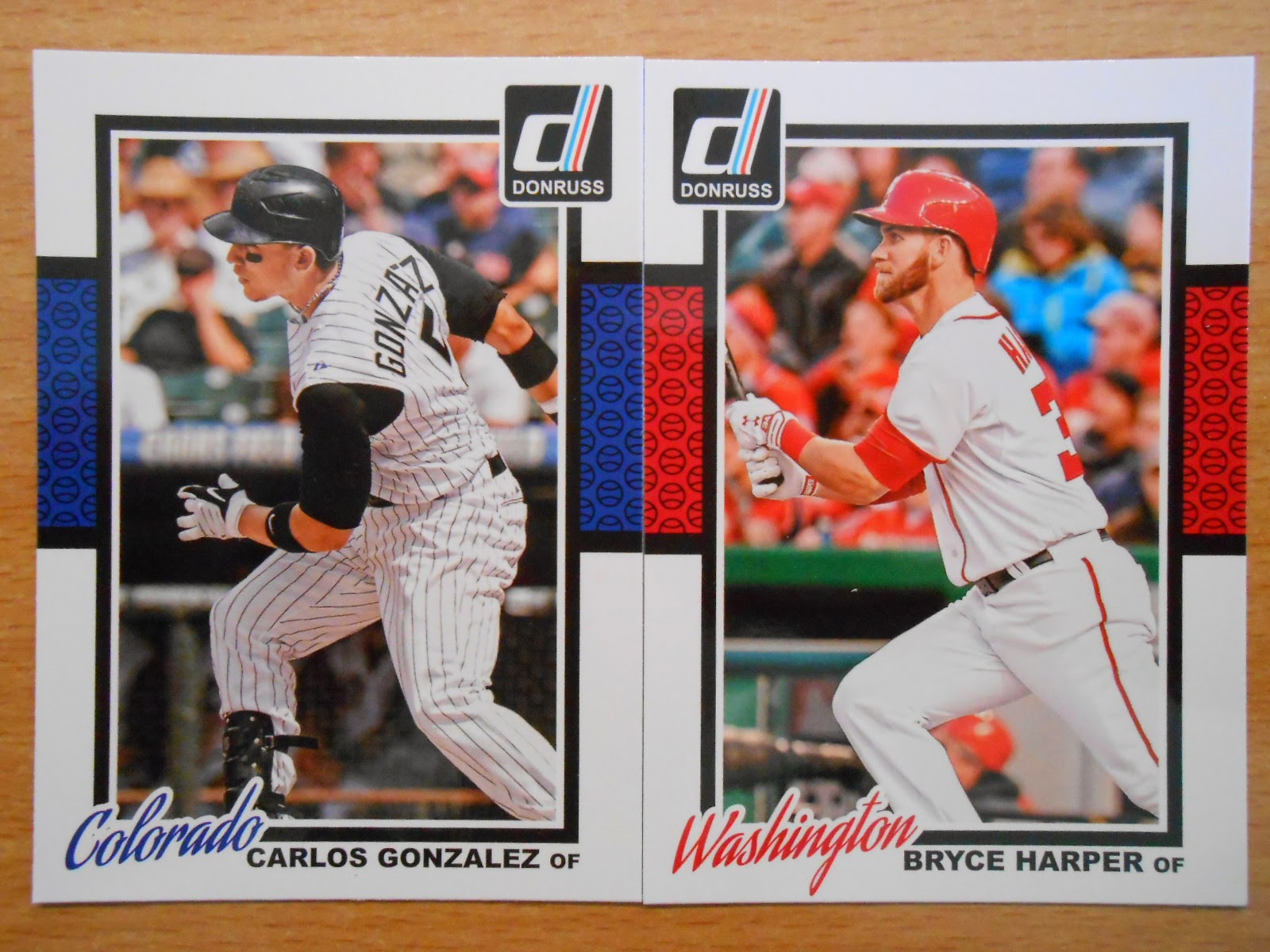 The checklist features some retired players, which I definitely like.  Nomaaaah! And the Big Hurt! 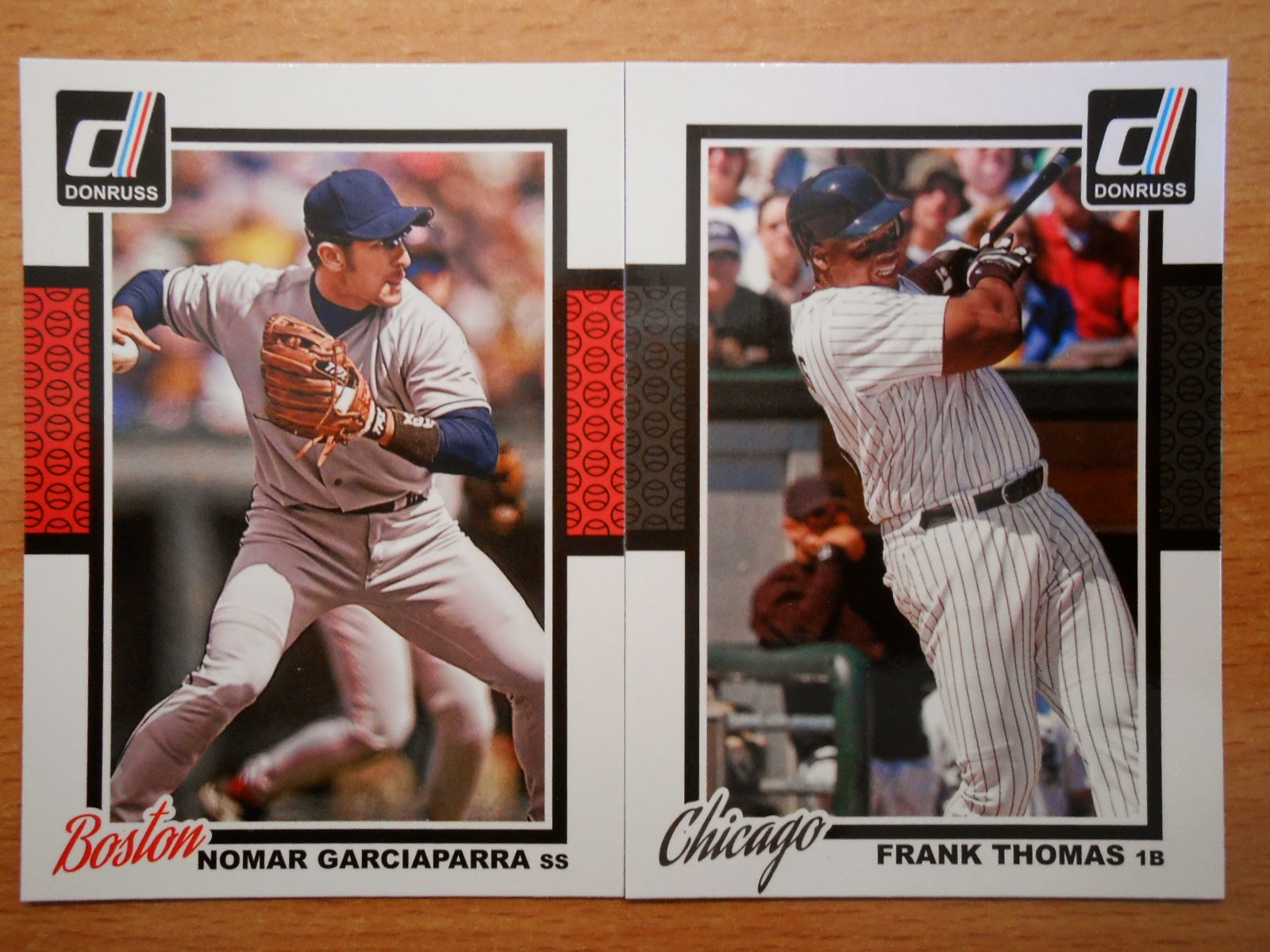 I pulled a couple of Yankees.  Normally, I don't post players from the Evil Empire, but I liked Rivera and I almost miss Soriano.  Again, I said, "almost." 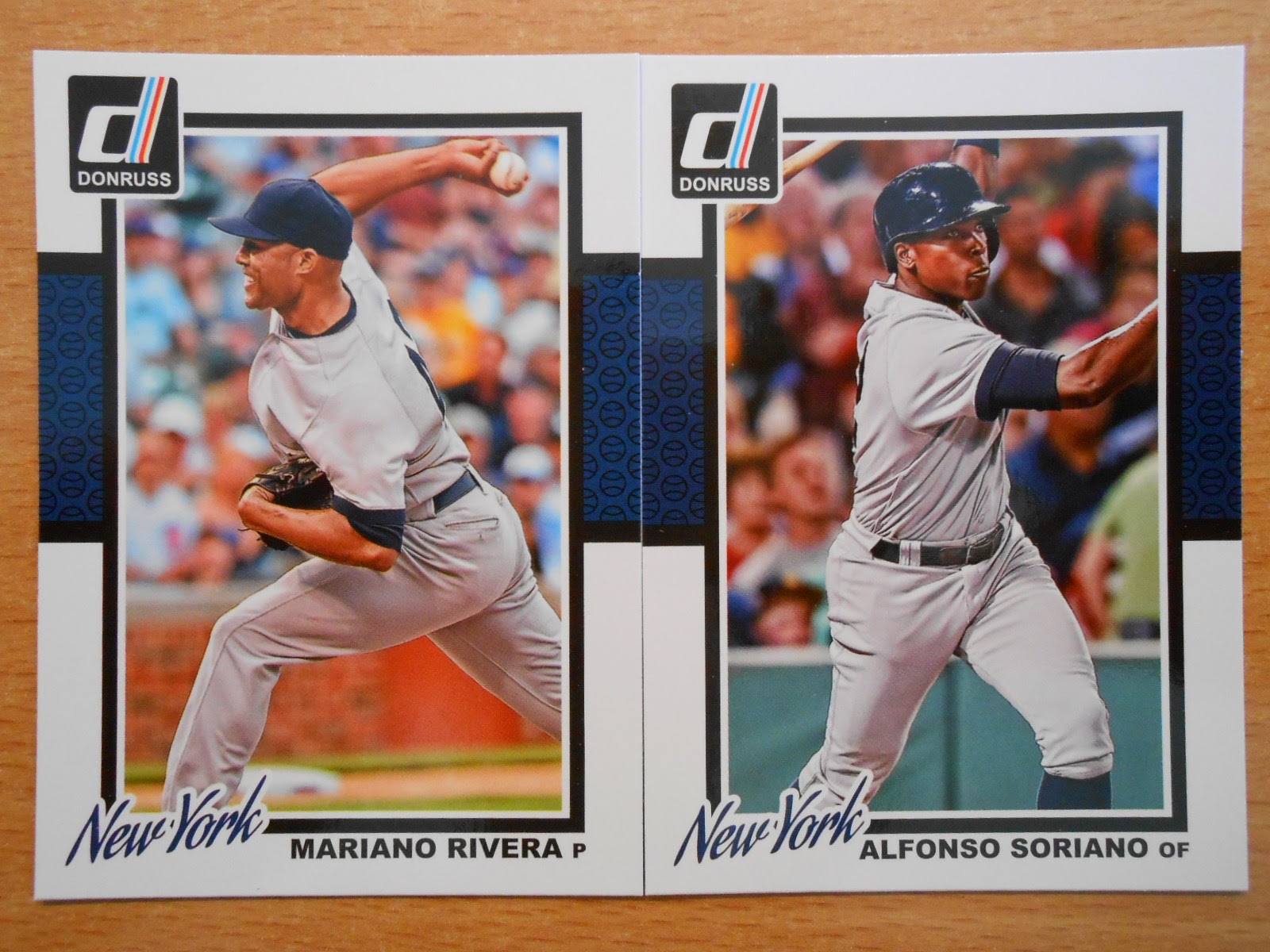 The backs of the cards are similar to previous iterations of Donruss as well.  Let's take a look at Bo again: In some ways, I can see a pretty easy comparison of this set to Topps Archives.  Archives takes "the best" from a series of Topps sets and makes a nice little compilation set.  This version of Donruss, produced by Panini, is in the same fold for sure.  Albeit, without the logos.  Sigh.