Hey, look at that! It's my first HOF Binder post with the new year markers from Wrigley Wax! He even sent be the template so I can more going forward. How cool is that? 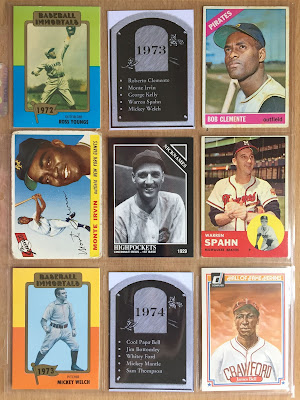 Page 17 brings us some great variety with well known names (Spahn & Clemente), guys I don't know much about like (Youngs & Welch), and a speedster known as Cool Papa. Plus, actual vintage! Woo-Hoo! 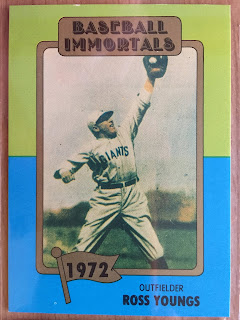 Ross Youngs played ten years in MLB, all for the New York Giants. He was a 0.322 career hitter who played mostly right field. Youngs finished fifth in MVP voting during his age 27 season in 1924, when he set career highs in batting average and on-base and slugging percentages. Youngs in another benefactor of being elected to the Hall of Fame by the Veterans' Committee. 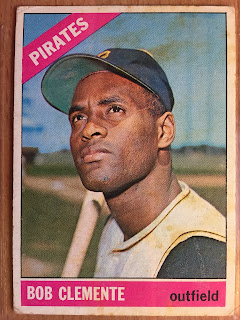 How can you not appreciate Roberto Clemente? He tallied his 3,000 hit at the end of the 1972 season and died in a plane crash attempting to deliver food and medicine to earthquake victims in Nicaragua during that off season. Clemente was elected into the Hall of Fame by a special committee in 1973, effectively bypassing the 5-year rule for retired players. Clemente won four batting titles, one MVP award, twelve Gold Gloves and was a member of fifteen All-Star teams. He was also the first Latin American to be enshrined in Cooperstown. Side note: you can read about how I came to own this card here. 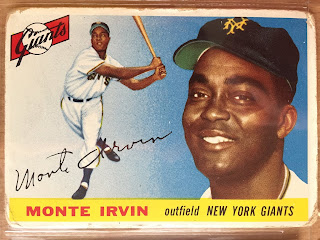 It was of great debate who was the best candidate to break the color barrier back in the 1940s. Many of the Negro League players thought Monte Irvin was the best choice, but ultimately Branch Rickey went with Jackie Robinson. It was said that Irwin was the more complete player, who had a cannon for an arm and could hit the ball a mile. Irwin, who served three years in World War II, was past his prime when he made his debut at age 30 in 1949 for the New York Giants. He would give fans a taste of what they were missing during the first half of his career, when he was voted third for the MVP award in 1951. That season he hit double digits in doubles, triples, homers and steals, while leading the league in RBIs and walking twice as much as he struck out. It sounds like he was a complete player! 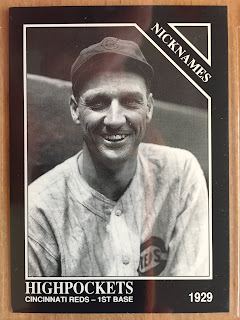 High Pockets is/was a nickname given to tall people. George Kelly was 6'4" and was also known as "Long George." Kelly, a first baseman mostly for the Giants and Reds, was known for being a clutch hitter. When home runs were starting to become en vogue during the roaring 20's High Pockets was among the league leaders in the category during seven different seasons. Kelly played parts of sixteen different seasons, but only totaled more than a hundred games in nine of them. He is another player who had a good career, but was helped by the Veterans' Committee to gain election. 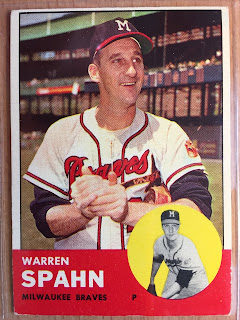 Warren Spahn made his debut with the Braves at age 21 in 1942. He missed the next three seasons while he served in the military. Spahn pitched well when he returned to Boston in 1946, but really came into his own in 1947 when he earned his first of seventeen All-Star appearances. He topped the league in wins nine times, won three ERA titles and was an absolute horse on the mound. Spahn won 363 games in his career, good for sixth all-time, and he also threw 382 complete games. Also Spahn and Sain, and pray for rain! 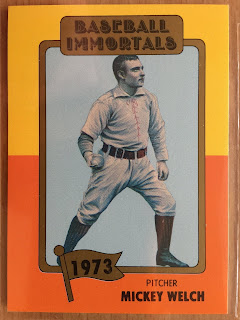 Mickey Welch, a pitcher for the Troy Trojans and New York Gothams & Giants for thirteen years, finished his career with 307 wins and a 2.71 ERA. During his career he made 549 starts as a pitcher and he completed 525 of those starts. If you guessed he was a Dead Ball Era pitcher of the late 1800's you would be correct! In 1884 he started 65 games, which was 58% of the teams 112 games that season. Baseball was so different back then! 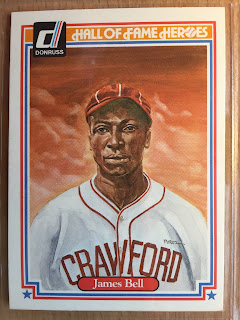 Cool Papa Bell, a switch-hitting center fielder, played in the Negro Leagues from 1922 to 1946. He had a reputation for being the fastest man in the league. His plaque in Cooperstown boasts that he regularly hit above 0.300 and topping 0.400 on occasion. Satchel Paige is known for saying, "Cool Papa was so fast he could flip the light switch and be in bed before the room got dark." But I also found this quote from Paige that made me smile, "One time he hit a line drive right past my ear. I turned around and saw the ball hit his ass sliding into second." It was said that he would often beat out come backers to the pitcher and he was known for taking two bases on a sacrifice bunt. That's one fast man!

My favorite card from the is page is the 1966 Topps Roberto Clemente, because it takes me back to the days of being a young collector. My favorite player on this page is Cool Papa Bell. When I play Strat-O-Matic baseball with a friend he is often my center fielder and lead-off hitter. I'm fascinated with the legendary stories of his speed.