Four more cards from the 1980 TCMA Baseball Immortals populate this page. I feel as though if a card company put out set with all of the Hall of Famers represented that it would sell really well. I figure the problem would be earning permission from all the players and their estates to be represented within the set. 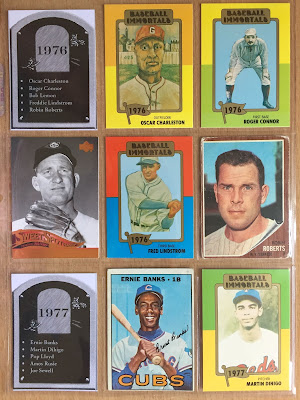 The TCMA cards, on a couple of occasions, have featured some creepy artwork. I think I'm okay with the sketch of Oscar Charleston. 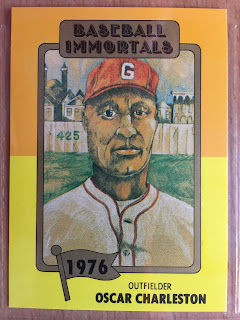 Oscar Charleston played in the Negro Leagues from 1915 to 1941. Bill James, the noted baseball historian, ranks Charleston as the fourth greatest player of all-time. He is the Negro League's all-time leader in stolen bases and he ranks in the top five in batting average and home runs. 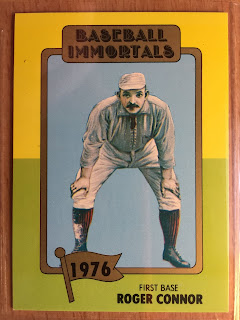 Roger Connor played for six different teams during his career, which spanned from 1880 to 1897. Connor was the definition of a power hitter during baseball's early years. There's a thirteen year period during his career where he averaged 27 doubles, 15 triples and 9 homers. Connor, a 0.316 batter, finished his career just shy of 2500 hits. 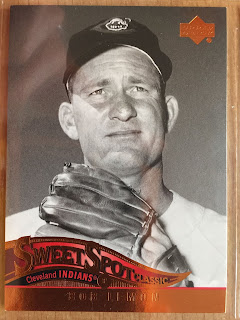 Bob Lemon got a late start to his big league career after serving three years in the military from 1943-1945. At age 25 he made his debut for the Indians and shortly after that he was firmly entrenched within Cleveland's starting rotation. He led the league in complete games in 1948, 1950, 1952, 1954 and 1956. From that stat, one may think the seven time All-Star had his best years during even years, but he was as big a workhorse as any pitcher in the AL during that period. He finished his career with a 3.23 ERA and a record of 207 wins and 128 losses. 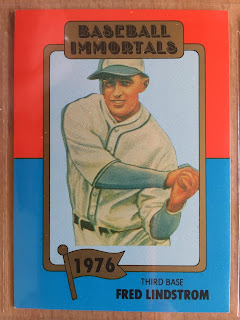 Freddie Lindstrom played thirteen years at the hot corner, most notably with the New York Giants. He was a career 0.311 hitter who had two stellar seasons where he hit 0.358 and 0.379. Those two seasons and a generous Veteran's Committee are what earned him passage to Cooperstown. 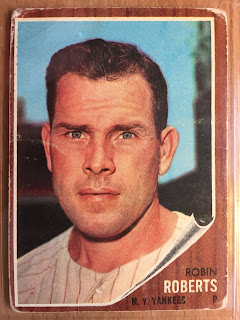 Fourteen of Robin Roberts' nineteen big league seasons were with the Philadelphia Phillies. He was elected to seven All-Star games, which were all in his twenties. During those years he regularly logging over 300 innings, while completing about 68% of his starts. In 1952 he was named MLB Player of the Year as he went 28-7 with a 2.59 ERA. He led the league in wins, GS, CG, innings, fewest walks per nine, and best K/BB ratio. Impressive! He finished his career with a 3.41 ERA and 286 wins.

Ernie Banks was the first Cub to have his number retired. He was elected to the All-Star game fourteen times, won a gold glove and won back-to-back MVPs as a shortstop in 1958 and 1959. He is known by most on the north side of Chicago as Mr. Cub and for his famous quote, "Let's play two!" 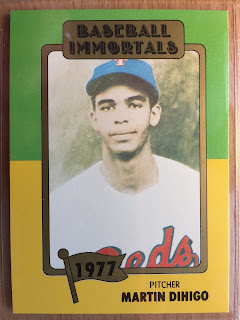 Martin Dihigo, with Babe Ruth, is considered to be one of the best two-way baseball players of all-time. Dihigo is not only a member of Cooperstown, but also the Mexican Baseball Hall of fame and the Cuban Baseball Hall of Fame. He played from 1922 to 1950 and spent time at every position other than catcher. During his career Dihigo won over 250 games and two batting titles.

My favorite card on this page is by far and away the 1967 Ernie Banks. I didn't get to meet Ernie in person until forty years after he retired. The youthful face of Ernie is something to behold, although he has the same smile . . . he always seemed to be smiling.

The card I'd most like to upgrade, besides the four TCMA cards, would be the Sweet Spot Classic card of Bob Lemon. Lemon played into the late 1950s and he isn't the biggest name from that era. I should be able to find a vintage card of his at a decent price.