Page 18 of the binder brings us eight cards from seven different sets, including a vintage Mickey Mantle! Mantle may carry this page, but there's plenty more solid talent on the page including a couple of former Cubs! 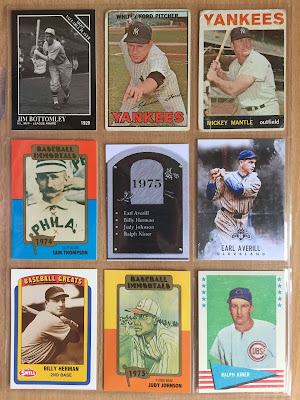 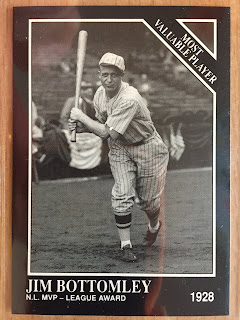 Jim Bottomley, a St. Louis Cardinal, played first base for three teams during his sixteen year career in which he batted 0.310 and amassed over 2,300 hits. His earned MVP consideration six times and won the award in 1928. That year he scored 123 runs, swatted 42 doubles, 20 triples, 31 homers and knocked in 136 while hitting 0.325. 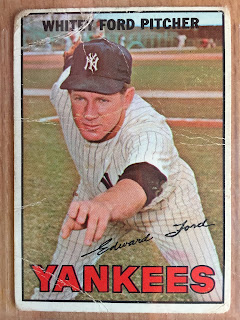 This ten time All-Star won five World Series championships during his sixteen year career. Whitey Ford served his age 22 and 23 seasons in the military, but otherwise he anchored the Yankees' staff while consistently pitching 200+ innings. In 1961 he won the Cy Young award when he went 25-4 with a 3.21 ERA. Ford finished his career with a record of 236-106 and an ERA of 2.75. He also has one of the cooler nicknames: "Chairman of the Board". 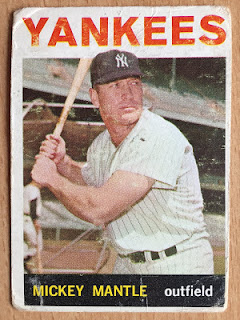 Mickey Mantle was THE MAN. When he was healthy there wasn't another player as dynamic in the game during his era. Ted Williams may have been a better hitter, but I think Mantle had the better overall skill set. His career spanned eighteens seasons and he was elected to the All-Star game in all but two of those seasons. At twenty years old, the switch-hitting center fielder received his first All-Star nod and finished third in the MVP voting. Mantle would go on to hit 0.298 and 536 homers during his career. You can read about how this card came to join the Hall of Fame binder here. Thanks again, Mark! 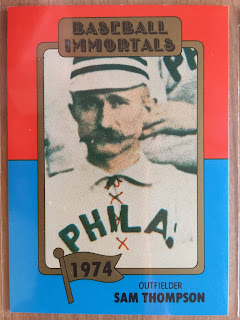 Sam Thompson, and outfielder for the Detroit Wolverines and Philadelphia (Quakers & Phillies), was a career 0.331 hitter. He's another Deadball Era player elected by the Veterans' Committee, but the more I look at his stats I think he definitely belongs in The Hall of Fame. There's a good ten year span in the middle of his career where he was arguably one of the best outfielders in the game. Take a look at his stats and let me know what you think! 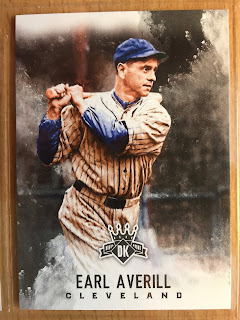 Earl Averill played most of his thirteen year career for Cleveland. Alverill, a dominant offensive force during the 1930's, was an outfielder who had some pop (238 home runs) and who can handle the bat (0.318 hitter). His career on-base percentage was a cool 0.395 and he often ranked in the top ten in that category. Averill graduated from high school in Snohomish, Washington, and his nickname was "The Earl of Snohomish."  Good stuff! 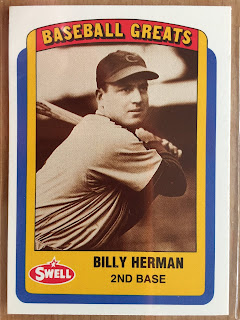 Billy Herman played eleven of his fifteen big league seasons for the Cubs. The second baseman didn't provide much power, but he brought enough to the table to represent the National League in the All-Star game ten consecutive years. His All-Star string was snapped when he entered the military for two years starting in 1944. His 162 game averages for his career, provided by baseballreference.com, show a 0.304 average, 98 runs, and 52 extra base hits. I'll take that out of one of my middle infielders! 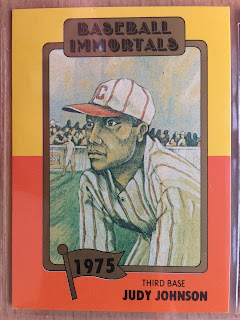 Judy Johnson was considered to be the best third baseman of his day and the best clutch hitter in the Negro Leagues. He became the sixth former Negro League player to be inducted in the Hall of Fame in 1975, after he stepped down from serving on the Hall of Fame's Committee on Negro Baseball Leagues. Johnson was also the first African American to coach in Major League Baseball. 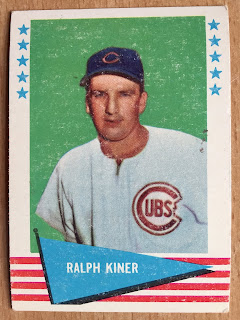 Ralph Kiner only played ten years in MLB, but he made a lasting impression. Known better as a Pittsburgh Pirate, the left fielder lead the NL in homers during each of his first seven seasons. After suffering through some seasons with back problems, Kiner retired at age 32 to become the general manager of the San Diego Padres, an affiliate of the Cleveland Indians at the time. Bill James, noted statistician, calls him one of the four best out fielders of his era, which included DiMaggio, Musial and Ted Williams. Lastly, when he retired he was sixth all-time in career home runs. Now he is 78th. How crazy is that?

Biggest improvement I'd like to make on this page: find a new Judy Johnson or Sam Thompson card so that each card on the page is from a unique set. Also, I'd like to add a card of Kiner in a Pirates uniform, the team which he is known for playing. The Cub card could then go in a different binder!