This is what I'm talking about.
Last week's post featured a bunch of players who were voted in by the Veterans' Committee and they weren't exactly household names. There's some top shelf talent on this page and there are are eight different card designs, which makes me smile. Let's do a quick breakdown! 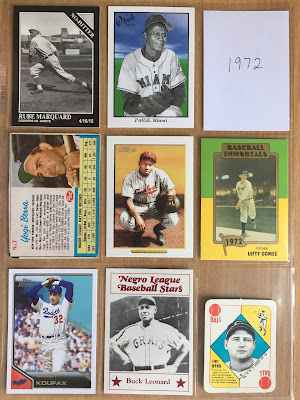 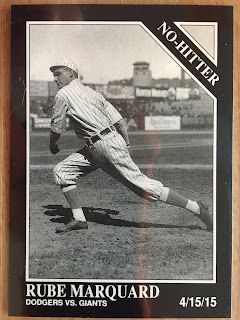 Rube Marquard is another Veterans' Committee elect. He pitched for four teams during his eighteen year career including the New York Giants, the Brooklyn Robins, the Reds, and the Boston Braves. He earned MVP consideration in two of his seasons and lead the league in wins, losses and strikeouts each one time in his career. Marquard finished up with a record of 201-177 and an ERA of 3.08 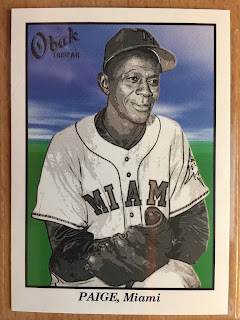 Satchel Paige is one of my favorite Hall of Fame players. Someday I'm going to track down a biography on him, but until then I can live off of his player bio page from SABR. Satchel is one of the greatest pitchers and entertainers to ever toe the bump. He made his MLB debut at age 41 in 1948. He was elected to All-Star games in 1952 & 1953 and he pitched three innings of 1-hit ball at the age of 58. On a somewhat related side note: Paige was also highlighted in one of my morning comic strips last week. 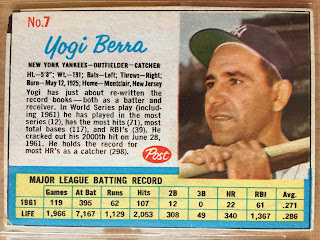 I can't remember when or where I picked up this Post card of Yogi Berra, but I absolutely love it. Berra is known for his famous sayings and being one of the best catchers ever. He won TEN World Series titles with the Yankees, he was a 3-time MVP and an 18-time All-Star. 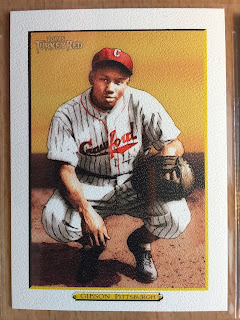 Josh Gibson, like Satchel Paige, was one of the best Negro League players ever. It is reported that he hit the farthest home run ever at Yankee Stadium at 580 feet! It's also said that he totaled nearly 800 homers during his career from 1930-1946. 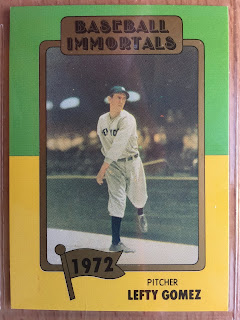 Lefty Gomez, who played almost exclusively with the Yankees, is another player granted access to Cooperstown through the Veterans' Committee, but his career seems to have more merit than most from Page 15.  He won two pitching triple crowns, was a seven time All-Star and went 189-102, with a 3.34 ERA, during his fourteen year career. 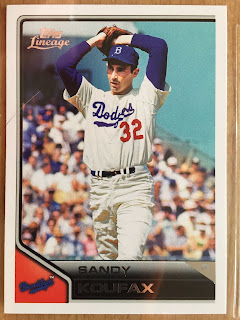 Sandy Koufax was one of the most dominant pitchers ever. He only pitched twelve years, from age 19 to 32, but those last five years were as good a stretch as one would ever see in baseball. I enjoyed the 2011 Topp Lineage set when it came out, but this card is merely a placeholder for a vintage Koufax. I've got my on acquiring a 1965 Topps card of his... just have to find one at the right price! 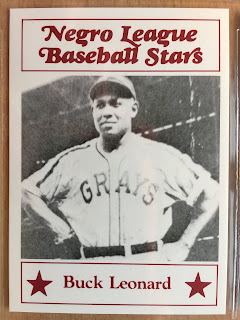 Buck Leonard is another one of the Negro League's best players. He played on the same team as Josh Gibson and the two formed the most formidable 1-2 punch in the league. Leonard was a first baseman who could hit for a high average, but he also possessed tremendous power. 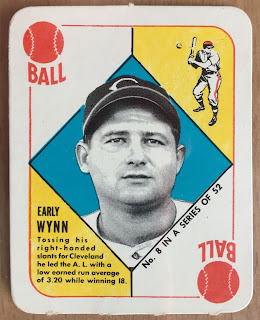 Early Wynn won exactly 300 games during his 23-year career. He was also a 9-time All-Star, won a Cy Young award and ERA title. Wynn even served a year in the military during his age 25 season. This card was sent to me by Commish Bob and it is the oldest card in my HOF Binder. I never thought I would own a 1951 Topps Red Back! Thanks Bob!

That was a fun page to dissect. Lots of variety within the cards and the players. My favorite card on the page is the Josh Gibson Turkey Red card. I have a fascination with the Negro Leagues, its players and its history. I like how Turkey Red cards are vintage-esque and I think the squatting picture of Gibson is perfect for one of the most underappreciated catchers baseball has ever seen. The Berra and Wynn cards are a close second place, because vintage cards of Hall of Famers are part of the reason I started this binder project in the first place.

That's it for this week! Thanks for stopping by.