Cardinals in a PWE?

Kenny, the all powerful Zippy Zappy and Luis Torrens super fan, dropped a PWE on me a couple of days ago.

Things started out innocent enough: Blake DeWitt. This card is from my favorite Topps set since I got back into collecting in 2009. 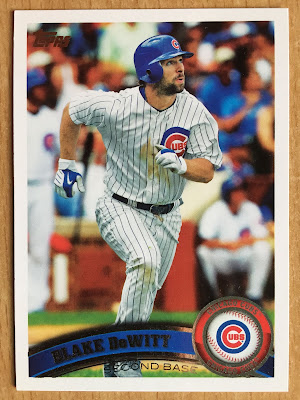 And then this happened! 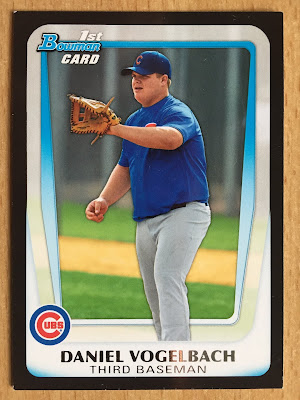 Going to Blake DeWitt to a Vogelmonster rookie is similar to playing with sparklers on the Fourth of July and then being handled some M-80s.  Ka-Boom! 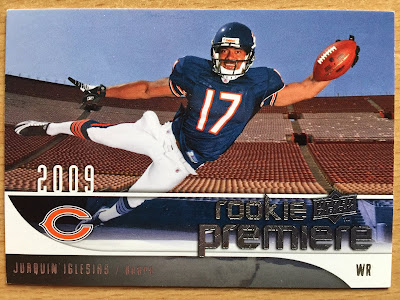 I'm a Chicago Bear fan for sure. The NFL season helps me get through the wintry months. Jurquin Iglesias played in one game during his NFL career. I guess that's why I don't remember him.

I know these two guys. 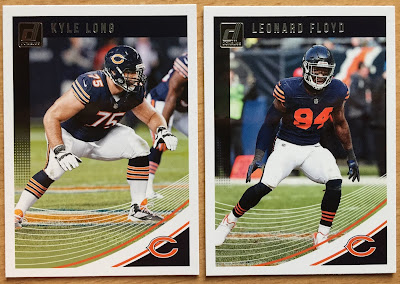 Kyle Long is the dean of the offensive line and I'm predicting a break-out season for Leonard Floyd in 2019. Oh yeah, logos on Panini cards. Nice!

I'm still not sure what to think about Mitchell Trubisky. 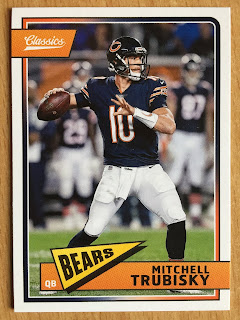 He took a step forward last year, but it wasn't as big a step as many had predicted. Personally, I still can't get over the Bears trading up to take him. They got fleeced. In short, the Bears traded up from the #3 overall to #2 overall and gave up two 3rd round picks and one 4th round pick to do so. 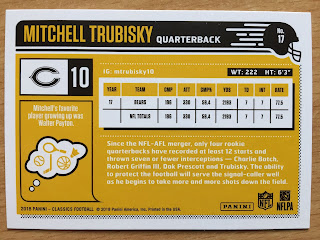 For the record, the Browns took a defensive end #1 overall and Patrick Mahomes and DeShaun Watson went 10th and 12th overall, respectively.

Meh. I digress. Let's move on back to baseball, which is something I know much more about. 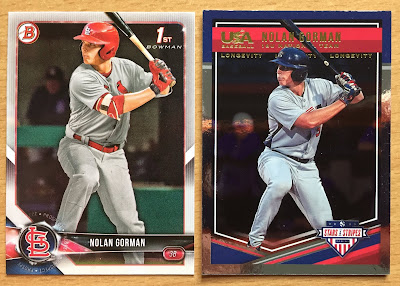 Gorman absolutely raked in rookie ball last summer after being drafted in June. He was promoted to the Peoria Chiefs and hit just above the Mendoza line in twenty-five games. The third baseman tore it up in Spring Training and there was speculation about him starting the season High-A Palm Beach. Nevertheless, he was issued a plane ticket back to P-town (Low-A). He just turned nineteen a couple of weeks ago and already has 9 homers this spring, which leads the Midwest League.

I'm going to try to get one of the cards signed for Kenny, but that could be pretty challenging. The Chiefs only play three home games in the next eighteen days!  Yikes. And honestly, I'm hoping my high school baseball team is still playing when the Chiefs come back into town for that brief three game home stand.