Hey, I Was At That Game!

It seems like there's always someone who will chime in with, "Hey, I was at that game!" I live in the midwest, but I know three people who claim to have been at Game 1 of the 1988 World Series. I suppose that's not a completely unbelievable number, but I do live about 2,000 miles from Chavez Ravine and most everyone in my neck of the woods have ties to the White Sox, Cardinals or Cubs.
Here's the moment in that game. Give the video a play, if for nothing more than to here Vin Scully make one of his greatest calls of all-time:


"High fly ball into right field, she is gone!
"In a year that has been so improbable, the impossible has happened.
“And now the only question was, could he make it around the base paths unassisted.”

Well, today the FedEx truck stopped by the house and made a delivery. I've been waiting on two Topps Now autos for about a month now and one arrived today. Unfortunately, it's not the one I really want. Bummer.

This one is only going to stay with me for only a brief time: 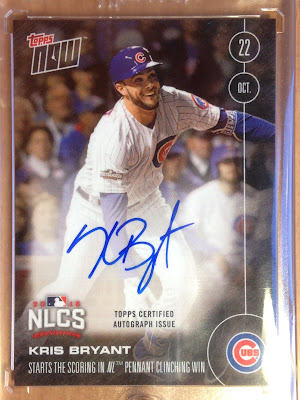 I was given the opportunity to go to Game #6 of the NLCS and I'm passing this piece of cardboard goodness on as a thank you present to the original owner of the ticket. 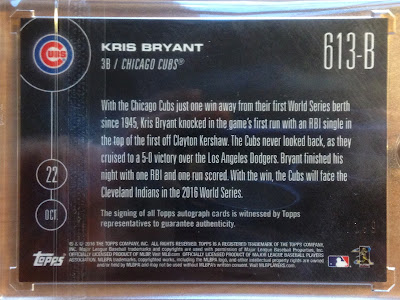 Jeff, one of the best men in my wedding over a decade ago, lives in Texas and is a Chicago Cubs season ticket holder. (I know, right!?) If I remember right he attended the first two games of the NLCS at Wrigley, but he asked me and another buddy (Vince) if we would want to go Game #6. 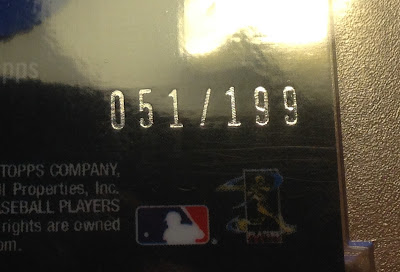 I'm still not sure how I got so lucky, because Jeff knows lots of people in Illinois who would have jumped at the opportunity. Heck, he could have even sold the pair of tickets on-line for a small fortune.

I've been holding back on paying him for the ticket, to the best game I've ever attended, until I had this card to accompany the check. Hopefully this card serves as memento for the day the Cubs won the NL pennant and he made me and Vince two of the happiest Cub fans on the planet.  Thanks again Jeff!

Our cats love radiant floor heating. It's always easy to find the four-legged felines this time of year.  When in doubt, look in the master bath!