Tom R., a friendly reader of the blog, sent me a nice little stash of Conlon cards for my set build. 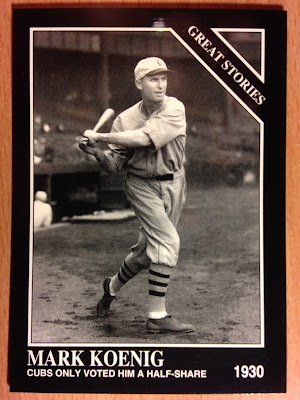 Of the eighteen cards in the package this one spoke to me the most. I love the stories from the Conlon series.  Let's see what this one has to say: 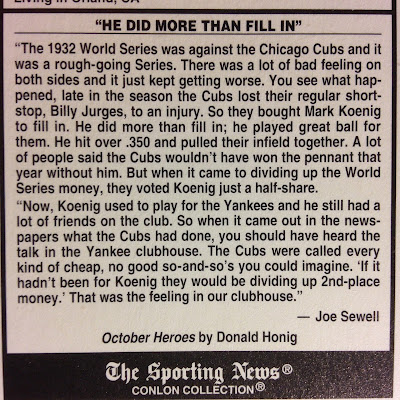 Here's a link to Mark Koenig's Baseball Reference page if you're curious. I'm not coming to the defense of the Cubs here, but Koenig played in only 33 regular season games of the 154 that season and two of the four in the post season.  That's half a share for playing in 22% of the team's games. It doesn't sound like too bad of deal. No?  On the other hand, it does sound like the Yankees had a point.

Speaking of playoff shares . . . The 2016 Cubs split a pot of $27.6 million 66 ways. A little quick math and we're talking about over $368,000 per individual. Wow. That sounds like a nice little bonus for some of lesser paid coaches and players!