Cards from Canada & a Set Idea

Trevor, a blog reader from Canada, sent me a box of cards recently that has taken me some time to make way through. I haven't received so many Cubs cards in one package since the days of those insane JBF bombings! (BWTP knows what I'm talking about.) 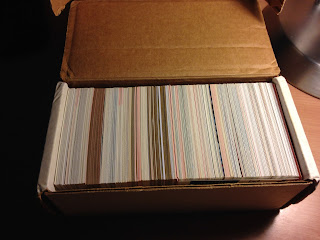 I shipped Trevor some baseball cards across the border I was looking to unload AND my entire hockey collection, which consisted of maybe forty cards or so. The box you see above is the exact same box I sent to Trevor and now it's back in P-town, but with many more miles on it. Actually, this box hails from my first trip through the hobby back during the junk wax era. I just can't see to part with it. 😏

Along with the package was a really nice note. Thanks, Trevor!  I always appreciate a good note.

300+ Cubs cards in the box and it was mostly from the junk wax era, as the note mentioned. There were a couple cards from the late 70s and early 80s, and two were from the twenty-first century, but the overwhelming majority were from 1988 to 1993.

Hey, that's right in my collecting wheelhouse!  I found some keepers for my player collections: 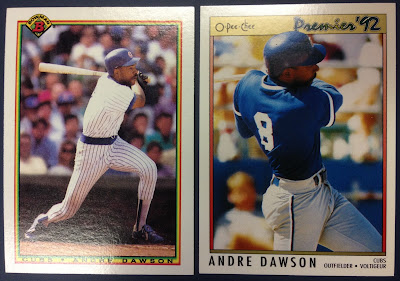 My sister has a pretty nice collection of Andre Dawson, but mine is slowly growing closer to the century mark. 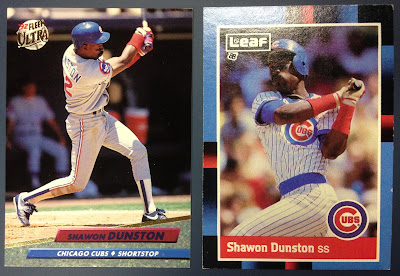 Shawon Dunston has always been one of my favorites. 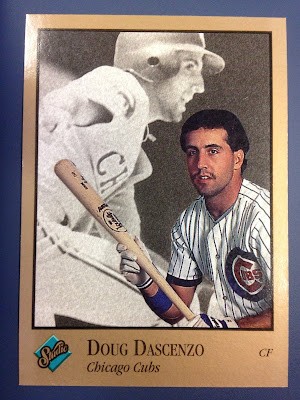 I'm not sure why I like Doug Dascenzo so much. He was never much more than a 4th outfielder with the Cubs, but he did seem to squeeze as much talent out of his under-sized frame as possible. 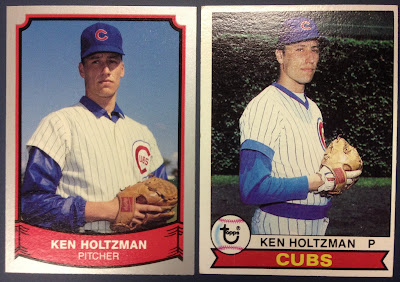 Ken Holtzman doesn't get much love from the card companies these days and his career was over before entered kindergarten. Yet, I read about him in one of my favorite Cubs books and he's stuck in my head as someone to collect ever since. 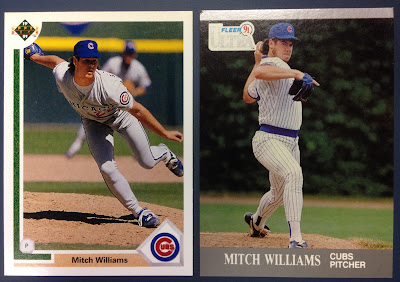 Wild Thing!  I'm up to twelve cards in my newly formed Mitch Williams player collection. My mom would be so proud! (She loved the Wild Thing.) 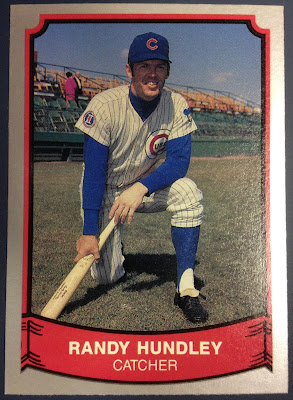 This is my first non-vintage Randy Hundley card in my collection. He's another better than average major leaguer who's long been forgotten by cardboard producers.

Someday Topps, Panini or another company will produce a LARGE set in the likeness of Fan Favorites or Hometown Heroes and I'll be all over it. If I were in control I'd set up internet polls for each team's fan base to vote on twenty players who should be included in the 600 card set, with part of the criteria being that all players who made five or more All-Star games would be ineligible. I think that would eliminate most of the all-time greats, and let's be honest, they see enough cardboard.

Last cards for the post . . . some Cubs FrankenSet finds! 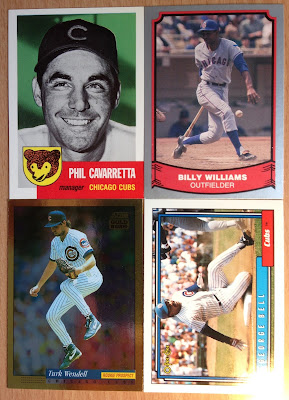 The 1991 Topps Archives of Phil Cavarretta from the 1953 set is a first for my collection. I think Trevor included an entire Cubs team set, which was pretty cool indeed. I'm a fan of Turk the Quirk, so the Gold Rush parallel was a shoe in. Also, how cool is it that I now have an O-Pee-Chee card (bottom right) from Canada in my set? Very nice.