I've been blogging at much slower pace as of late and I'm okay with that.  I hope my readers are as well, because I've found a groove again and I don't think the rate of change is going to pick up much in the near future.

My wife and had five consecutive days off around Thanksgiving, which in itself is somewhat of a small miracle. Even on her day off she often attends meetings at work and my schedule can get quite clogged with coaching responsibilities.

We had planned to take off Wednesday for Starved Rock and do some serious hiking, but the combination of rain and a sick cat (Gus) nixed that idea. Instead we left early Thanksgiving morning, did some hiking, had lunch with my in-laws at the state park, and then hiked some more. It was peaceful on the trails ... waterfalls ... canyons ... bald eagles.  It was a pretty cool way to spend the holiday.

That evening we drove north to a suburb of Chicago and stayed at a hotel. Laura and I were both needing a little dinner, but nothing too crazy after enjoying the buffet at Starved Rock. (They had biscuits and gravy on the buffet. How awesome is that!)  Because most of the restaurants were closed I volunteered to walk to the Walmart about a quarter mile of a way to pick up some microwaveable soup. I left at 5:30pm and got out of there at 5:58pm. Did you know that Black Friday starts at 6:00pm Thursday evening? Talk about a scene . . . people everywhere counting down the seconds so they get their special deal. Wow. 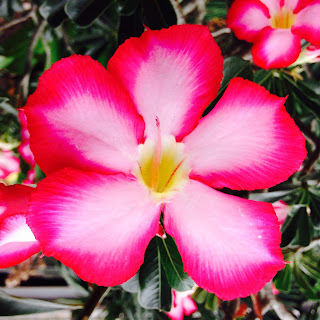 On Friday Laura and I spent the morning at the Garfield Park Conservatory in Chicago. My wife absolutely adores plants, and I love her, so this was a fun time for us both.  She took me out to Lulu's for lunch, which was a place I walk to for lunch when she was still in grad school. I feel head-over-heals for their jalapeno cheeseburger back in the day . . . so good!  I tried it again, thirteen years later, and it wasn't quite the same. Such is life.

That afternoon I dropped Laura off at King Spa, which is place where you walk around naked, hopping in and out of cold and hot pools, while naked, with other people around. Yeah, I love my wife, but I'm doing that. Nope.

I went to two card shops, one in Buffalo Grove and another in Palatine. I found a nickel box at the first store and I WENT TO TOWN! Man, you Chicago folk don't know how good you have it! The main beneficiary will be my BWTP Secret Santa recipient. You, my card loving friend, will be very happy. The second card shop in Palatine didn't have much I really liked, but I did find this Kosuke Fukudome Red Hot Rookies card for a buck and some BOGO card supplies. 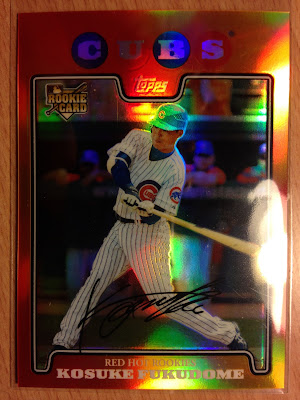 After the two stores I found a Barnes & Noble and picked up some more Cubs reading material and got a small percentage off for using my teacher's discount card. We don't get many perks, but I'm pretty happy when I get to cash in. The trip to the two card shops and one book store, with driving, took nearly four hours, which was just about how long my wife wanted at King Spa. Being naked around strangers for 3+ hours...  or baseball cards?  Yeah, I made the right decision.

Saturday, after a walking through the Lincoln Park Zoo, the Lincoln Park Conservatory and along Lake Michigan we headed home. Chicago, even when it's around 45 degrees, is a pretty fun town.

It was a really nice trip overall. We enjoyed each other's company, some neat restaurants, and with all the walking and hiking I don't feel like I gained too much weight over the holiday weekend.

Even better, I kind of feel out of my "The Cubs won, so now what?" funk. I think the long weekend was just what I needed.