Chronicling Some of the Best Blog Names

I love reading the baseball card blogs, because our community is chock full of wonderful writers and home to some very creative minds. The creativity isn't only on display within each post, but even some of the blog names are quite ingenious.

One of the blog names my mind really digs is Wrigley Wax, because it's about a guy who collectors "wax" of players who have called Wrigley home. "Cubs Cards" just doesn't have the same ring to it; thank goodness Paul was more inventive than that!

When I was growing up, anyone who had their own sports card was a hero of mine, so 2 by 3 Heroes would be in my list of Top 10 Best Blog Names, as well. It's a blog title I can relate to!

I love all things having to do with pirates and I enjoy a good play on words, so somewhere in the upper echelon we would undoubtedly find Bob Walk the Plank.  A couple other that employ some nice word play are Torren' up Cards and Schmidt Happens.

I can't forget about Plaschke, Thy Sweater is Argyle, because the title has both "thy" and "argyle" in it. Those words, my friends, are the makings of one sweet title.

A blog about cardboard that sounds like a 1960's band? Coot Veal and the Vealtone's  . . . just awesome.


And heck, The Card Papoy would be in the top 10, because I have no idea what a Papoy is, and Kevin's choice of words has piqued my curiosity.

Of all the blogs, I think The Chronicles of Fuji is the best blog name out there. "The Chronicles of" is a great hook. It sounds mystical and legendary at the same time. Add "Fuji" into the mix and now it sounds somewhat mysterious, and maybe, just maybe, there are ninjas in involved. (For the record, the only thing that trumps a pirate in my book are ninjas.) 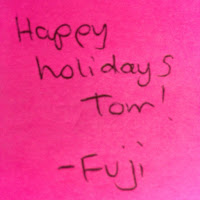 Fuji sent me a package the other day that snuck up on me like a ninja, that is to say I wasn't expecting it. And although there weren't any ninjas associated with this package, that I know of, it's greatness was rivaled only by Fuji's blog's name. Yep. It was that good. 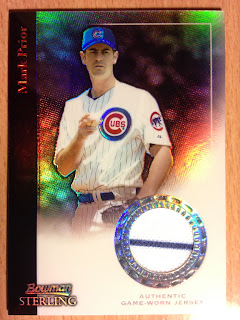 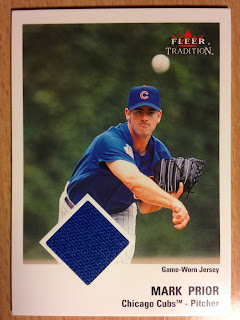 It started off with a pair of Mark Prior jersey cards. Mark Prior, you may remember, was once the goods. I'm sure these cards were a hot commodity back in the day, especially the Bowman Sterling because it's numbered /199, and now they are welcomed additions to my Cubs relic collection. 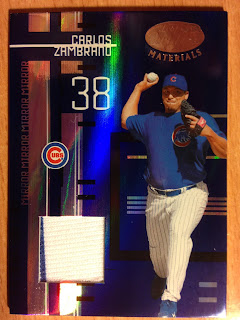 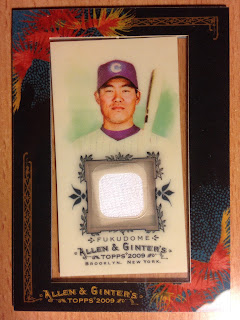 I love it when the jersey swatch matches the uniform on the card, so I will just assume the Zambrano artifact is from Carlos' pants. Right?

Kid K!  I've been the recipient of quite a few Kerry Wood relics as of late and I couldn't be happier about that! 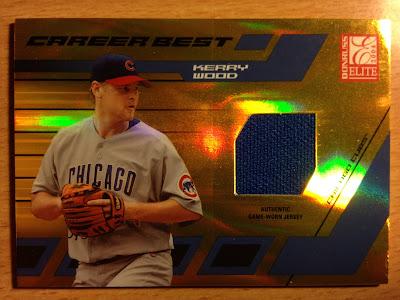 The one above is a duplicate, but that's cool by me because it'll go into a pile for Wrigley Roster Jenga or another Cub fan. Cards for fellow team collectors can be quite scarce at times! 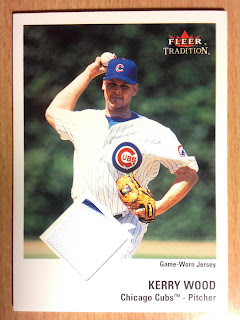 This Fleer Tradition card from 2004 is from the same set as the Mark Prior card above. Yet, the two cards will go in separate places in my collection. The Prior goes to the relic box and the Wood will make its way to the Kerry Wood binder.

Speaking of which, my Kerry Wood collection now stands at 489 unique cards. 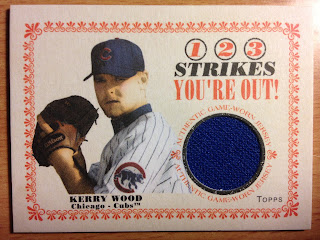 I decided to count this one even though I have it in the binder already. Why?  Well, the one Jaybarkerfan's Junk sent to me already was a white jersey with a blue stripe. This one is obviously not, which makes it a jersey parallel. Right?  . . . My collection, my rules.  489.  Firm.

A big thanks to Fuji for all the fabric in this package!  It was a great surprise from a blog with a really cool name. 😁

Happy Holidays to you all!

Oh, and I know some of you were gifted cards this holiday season. Maybe you have a new favorite card of 2016? If so, be sure to enter my contest. The rules are easy and the prize is a blaster of 2017 Topps flagship. Fourteen bloggers are in already, click here if you want to join the fun!
Posted by P-town Tom at 12/26/2016 07:25:00 PM