Sets to Complete from the Estate Sale

Within the binders I picked up at the estate sale there were many near complete sets. I have plenty on my plate and decided attempting to complete them all would be a decision Future P-town Tom would quickly regret. So a plethora of the cards were plucked from their pages and placed in the trade box, but I picked a few to pursue post haste.

Let's start with coolest one in my opinion, the 1984 Fun Foods pin set. The set is built of 133 players from the 1983 season, and if you were a fan of baseball in the early 80's, then all the usual names are there. 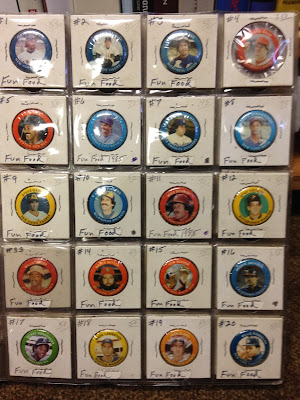 I'm only missing ONE pin. On Sportlots.com most of the pins can be had for eighteen cents Only four are listed for a dollar or more, including George Brett, Cal Ripken, Don Mattingly, Nolan Ryan, and the one I need. 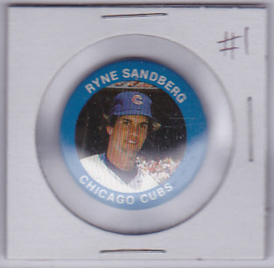 Doh! I have one of these in my Ryne Sandberg player collection, but I can't remove it from the player binder, so I must acquire another. Anyone have one of these laying around? For the record, it is number 13 in the set. 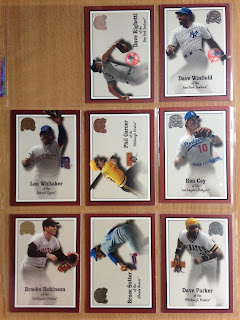 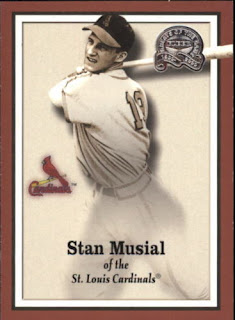 Next up is the 2000 Fleer set called Greats of the Game. The base set is only 107 cards and the binders contained all but three of the cards: #10 (Eddie Mathews), #63 (Warren Spahn) and #104 (Stan Musial). These are super thick cards and a really well done set overall.

I may be biting off more than I can chew with the next set: 1999 Upper Deck Century Legends. 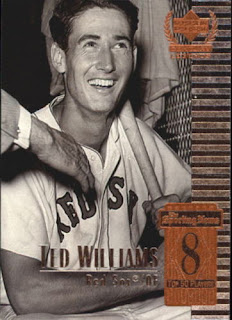 This one has a wonderful mixture of players from throughout the twentieth century.  The set is 135 cards in all, with two subsets. Fifty retired players make up the first batch of cards and each are ranked as The Sporting News did in 1998. As you can see Ted Williams is given the eighth best ranking of all-time. The next group of fifty cards contains players from 1998 and they are ranked in the same manner.

Cards 101-120 are 21st Century Phenoms and contain players like Nomar, Arod, Vlad, Jeter and Chipper. I swiped this Erstad card from the Ebay to give you a look at the design. 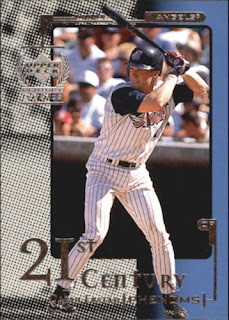 Cards 121-135, Century Memories, are cards commemorating some of the more notable achievements during the past century. (This is another picture borrowed from Ebay.) 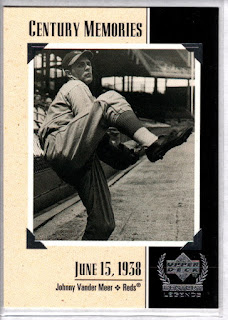 I'm missing fifty-one cards in this set, which is a pretty fair amount. Hopefully, my loyal readers can help me out with a few trades or off to Sportlots.com I will go.

The next two sets rival the '84 Fun Foods pins in my opinion, but for completely different reasons. The pins had a vintage-like feel to them, but the cards are more futuristic and shiny. They are etched in foil and have had a UV coating applied to them. 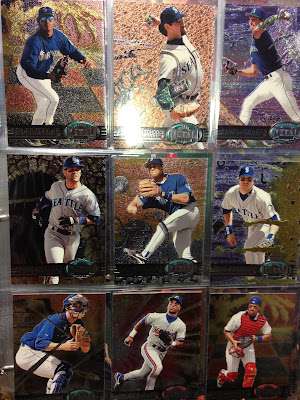 It's almost as though this set is a hybrid of baseball cards and comic books. The pictures don't do the cards justice, but these are truly fun to look! 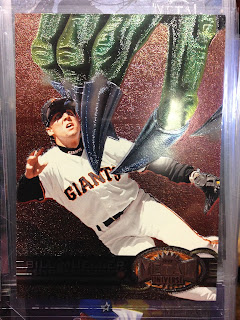 
I've enjoyed looking at this last set the most. It's the 1998 Metal Universe set, but without the comic book style. Instead the designers have thrown in planets, animals, and city-scapes. Some of them are quite clever! 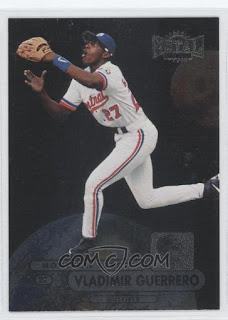 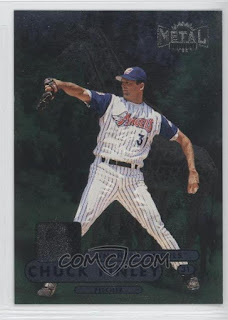 I had to swipe these photos from COMC.com, because mine wouldn't turn out at all. You can see Vlad stepping on a planet, but it's not nearly as shiny as the real thing. Can you make out the giraffes behind Chuck Finley? Is there a connection between Finley and giraffes that I'm missing? 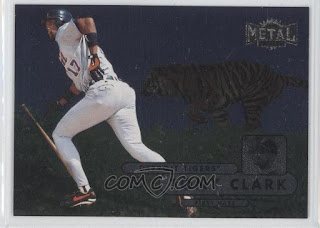 Tony the Tiger being chased by a tiger!  Stellar! 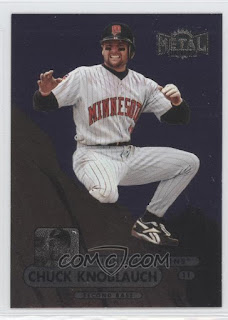 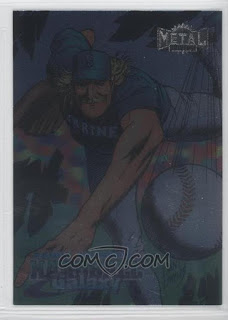 Chuck Knoblauch is bouldering. No?  There are fifteen cards at the back end of this 220 card set that feature players drawn as comic book characters. I have trouble telling who some of them are by the drawings, but they're pretty flashy otherwise.   I'm only missing nine cards from this set and here's a link to the wantlist.

So, that's the five sets I'm going to chase. I've created a new tab at the top of the blog, which contains links to all of the want lists for the various sets that I'm working on.

Thanks for stopping by to take a look, and please remember I'm always willing to trade if you have anything that might help!
Posted by P-town Tom at 6/15/2016 09:07:00 AM