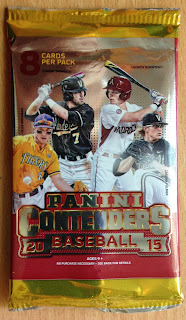 I made a stop at my LCS last week and after hand selecting a few Cubs cards to come home with me I walked up to checkout counter and placed a pack of 2015 Panini Contenders in my stack. I needed something to rip and I love prospects... so why not? 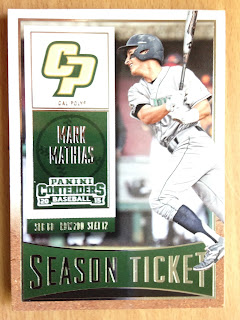 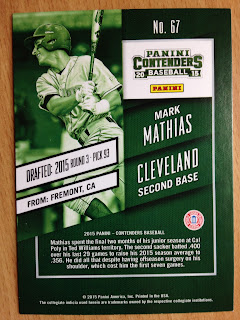 I seem to pull Cleveland Indian players more than any other team.  Why is there no Supertrader for this club? Why isn't there any Indians collectors out there who will respond back to my trade requests? Why, oh why?!?

For the life of me I can't figure out if there's any rhyme or reason to the Section, Row, and Seat graphic on the front of the card. Ryan Burr, a 5th round draft pick in 2015 of the Diamondbacks, apparently has been given Seat #32 in Row #225 of Section 64. 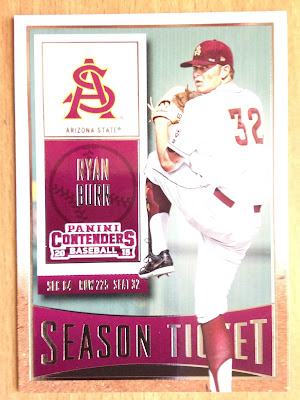 I want to see the stadium that has 225 rows. Wowzzers! 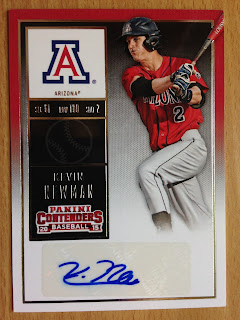 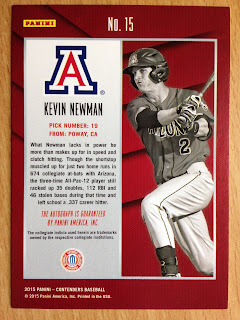 Kevin Newman was a shortstop for the University of Arizona, but this card makes no reference on the back to the MLB organization he now belongs. I suppose I could have waited for BWTP to tell me about Newman, but I love me some Internet. Newman is the 2015 1st Round Draft Pick of the Pirates and played for the West Virginia Black Bears last year. He was promoted to AA just about two weeks ago . . . he's on the fast track. Jody Mercer, if I were you, I'd be looking over my shoulder. BWTP, if I were you, I'd be checking my mailbox down the road.

I like these Passports cards. This set has a bunch of different inserts, but I think these are the ones that catch my eye the most. 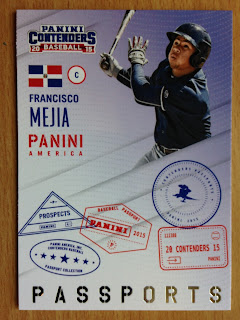 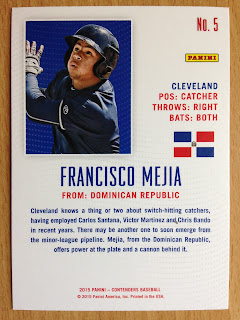 Great, another Cleveland Indian to add to a growing stack . . . growing in size and the amount of dust it is collecting.

Here's another insert. This School Colors themed set is pretty nice. I love cards that have the same design but different colors, especially when there's a reason behind the color. 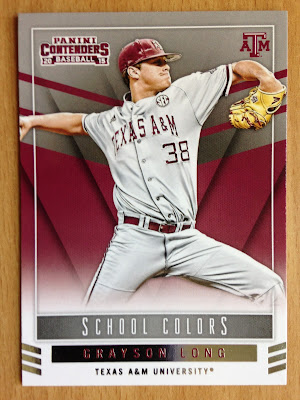 Grayson Long was the 3rd round selection of the Angels last year and is putting together a nice year for the Burlington Bees in the Midwest League. I've seen the Bees play twice this year, but Grayson didn't pitch either time. 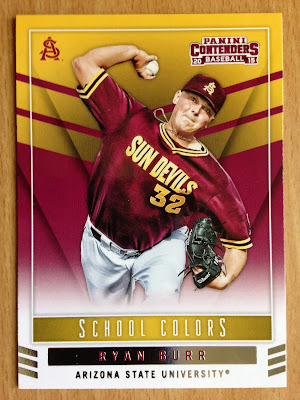 Man, I really can get behind a set that offers prospects and notable retired players. 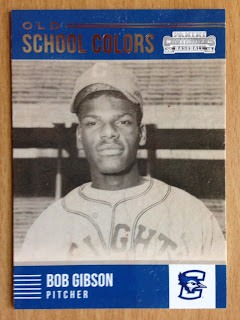 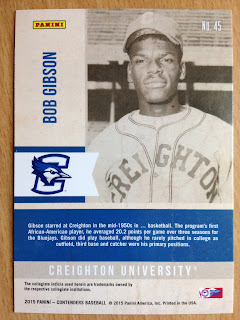 Bob Gibson was a STUD. I don't care for the Cardinals much, but I do respect the franchise on a whole because of the continued success they have had as a "smaller" market. I love pitching and there wasn't anyone better than Gibson during his prime.  Pretty neat card! 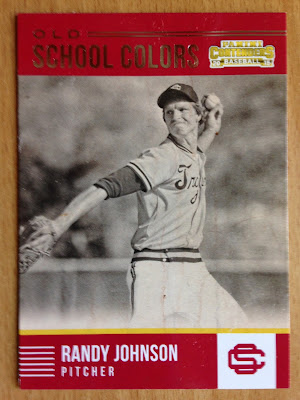 Man, I love me some Randy Johnson! The checklist for this insert set comes in at twenty-five cards and contains players like Bo Jackson, John Elway, Russell Wilson, Stephen Piscotty and Aaron Judge.

Now, for an eight card pack, that was a fun rip. The main set is only 100 cards, so I'm not at all bummed about receiving two base cards. I wonder if the auto took the place of a base card or an insert. As it was, I pulled five inserts, which is okay in my book because they're pretty sharp.

This Panini product was well done. Yes, I said it. I really enjoy the differently themed inserts and I love the pictures WITH the logos, even if they're not MLB logos.

Maybe I'll forgo collecting a 2016 product and see if I can find a couple of boxes of this on sale instead?

I'd love to hear your thoughts on this product.