Meet the Director of Smiles

I spun by my LCS after taking my grandfather out to lunch today. I took a glance at the lunch menu at his nursing home and the main dish featured eggplant. Needless to say, I think he was pretty happy I rescued him, especially when he sunk his teeth into a nice BLT at a nearby cafe.

Yes, I broke down. I really wanted a pack of Topps Archives, but because of Monday's holiday the shipment had not arrived yet at my local card shop. Shoot. Five months without opening any 2016 product ended when I left the store with three hobby packs of Topps Pro Debut.

I'm sure I'm not the first to mention this, but I am not a fan of Topps flagship design, which means I didn't like Opening Day and I'm not much a fan of Pro Debut. (Why, Topps?  Why must you use the same design for all three card sets?) But, I will give Topps credit for giving a full bleed design a shot. At least they are trying something different.

Here's something not different: Yankee Padawans. 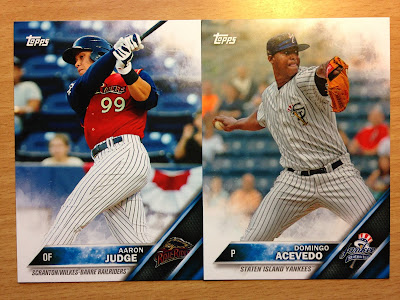 And yes, those have been set aside for ZZ.

Here's a couple for BWTP. 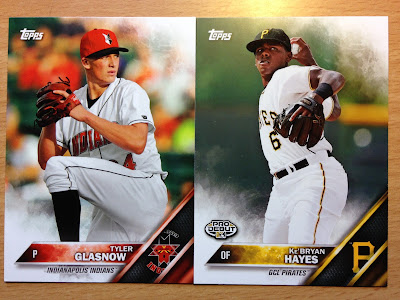 Is it bad that I have taken to shortening the names of my favorite trading partners?

Here are a couple of names I recognize. 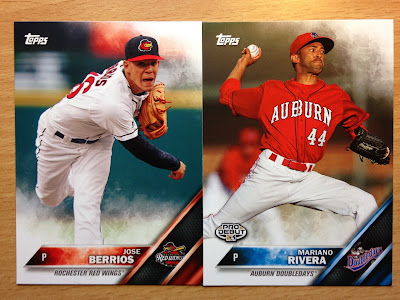 Berrios was a disappointment early this season at the MLB level and I had to drop him from my fantasy baseball team.  I'm fairly certain the other guy is included within the set because of name recognition. 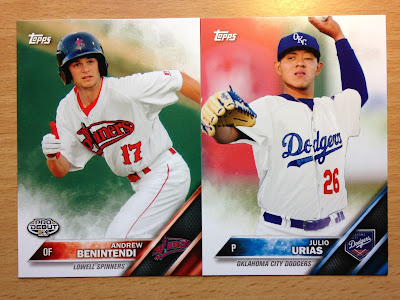 Benintendi is the player on the packs I just opened and Julio Urias was just recalled by the Dodgers. This photo appears to be from his before his eye surgery. (Correct me if I'm wrong.)

Three packs and I scored three young Cubs.  What luck! 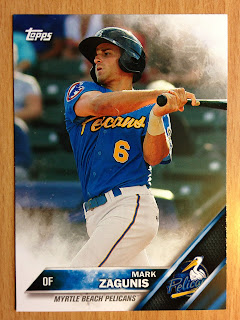 Mark Zagunis was second in the Carolina League in on-base percentage in 2015 and he's doing his thing in AA this year. 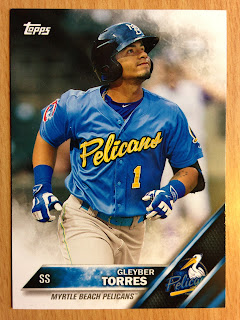 After a slow start to the season Gleyber Torres batted 0.306 in May for the Pelicans. He's only nineteen and is a very talented middle infielder. 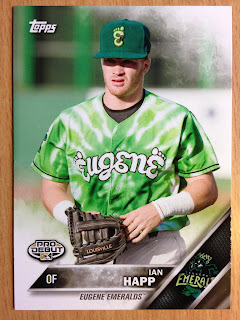 Ian Happ! I'm excited to finally have a non-Bowman card of the Cubs' 2015 first round draft pick. Happ is also at Myrtle Beach this year with Torres, and it'll be a nice race to see who gets to Wrigley Field first.

Pro Debut is a fun rip.  There are parallels, autos, patches, inserts, and variations.  I pulled one insert, but nothing to really write home about.  I was hoping to hit Homer's, the Peoria Chiefs' mascot, patch card.  Or this beauty would have been nice:

"Game Day shirt from the Director of Smiles, Rhashan." Man, what a fantastic card!