This page brings me back to my childhood. The first set I started buying packs for was 1988 Topps. I actually just finished building that set a couple of months ago, something I started when I was ten years old. Crazy to think it took me three decades to complete a set!

The cards of my youth were centered right in the middle of the junk wax years and I really went all-in on cards during the next four years. I wasn't collecting with the hopes of one day flipping my collection for a big pile cash. Instead, I was collecting because I love the sport and wanted to be closer to it. 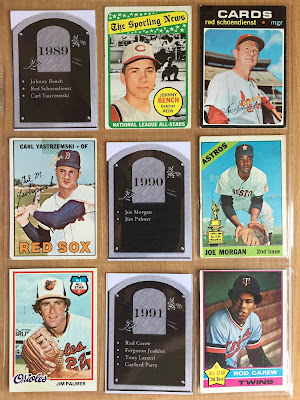 1989 was the first time I really paid attention to everything baseball, including the Hall of fame. With that in mind, let's break down the players from Page 25. 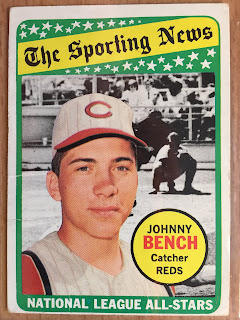 Johnny Bench is arguably the top NL catcher in the Hall of Fame and maybe the best ever with other consideration going to Yogi Berra. He is a career 0.267 hitter with 389 homers and in his prime there was no one better defensively. Bench led the league in throwing out runners three seasons and finished his career catching 43% of would be base-stealers. During his 17 year career he won the Rookie of the Year, two MVP awards, ten Gold Gloves, went to fourteen All-Star games, two titles with the Reds and was the MVP of the 1976 World Series when he hit 0.533. 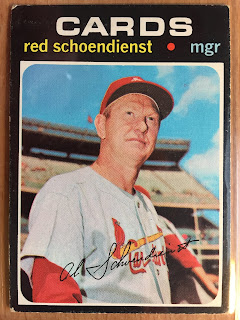 Albert Fred Schoendienst was voted into the Hall of Fame by the Veteran's Committee. This baseball lifer played from 1945 to 1963 and managed another fourteen seasons after he retired. Red is best known as a second baseman for the Cardinals and he helped win St. Louis a World Series in 1946. The ten time All-Star also played for the Giants and Braves, contributing to a World Series for the latter. Schoendienst was a career 0.289 hitter who amassed 2,449 hits. 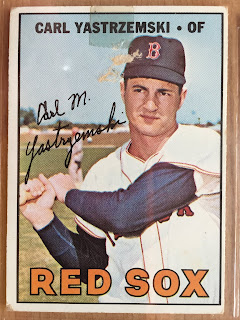 Carl Yastrzemski played twenty-three seasons for the Red Sox and collected 3,419 hits during that span. Yaz was elected to eighteen All-Star games and also won seven Gold Gloves. He won the Triple Crown in 1967 he hit 0.326 with 44 homers and 121 RBIs. Overall, he won three batting titles and arguably the most notable is his hitting crown in 1968 when he led the AL with a 0.301 batting average. Yaz popped 452 home runs to go along with a 0.285 average over his career. 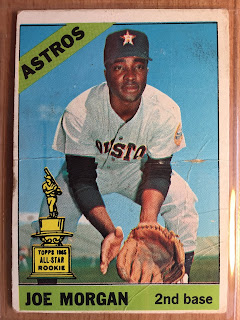 I love the Topps rookie trophy! Joe Morgan, the player, was dynamic. He nearly stole 700 bases during his career and he had a career OBP of 0.392. Morgan was a catalyst for the Big Red Machine and helped them win two World Series titles. Morgan's other accolades include winning five Gold Gloves, a Silver Slugger, two MVP awards and being selected an All-Star ten times. Personally, I remember Morgan once holding the career home run mark for second basemen before Ryne Sandberg surpassed him. 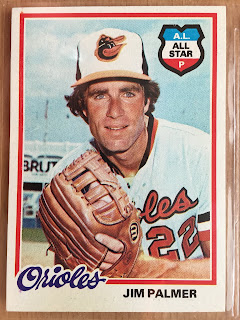 Jim Palmer pitched nineteen season in MLB and had an ERA under 3.00 in over half of them. Simply stated, he dominated during the decade of the 1970s. The six time All-Star won three World Series with the Orioles, four Gold Glove awards and three Cy Young awards. He finished up with a 268-152 record and a career ERA of 2.86 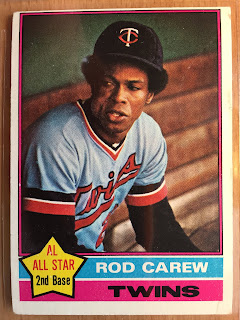 When I was growing up Tony Gwynn and Wade Boggs were often compared to Rod Carew. I knew nothing of Carew, as he retired before I started following MLB baseball, but man was he a great hitter! Carew was an All-Star eighteen times during his nineteen year career. He won the Rookie of the Year in 1967 and ten years later he was an MVP. That season he set a career high in runs scored, doubles, triples, homers, runs batted in and batting average (0.388). The longtime Twin and Angel finished his career with a 0.328 batting average and 3,053 hits.

The 1969 Johnny Bench is my favorite card on this page, because Sporting News All-Star cards are wonderful. I really like how this one has a black-and-white shot in the background and a color portrait in the foreground. Very nice.

What I'll remember about this page the most is all six of the cards are from different Topps sets and the number of each card ends in a five or a zero. Hall of Fame caliber players should be given the five or zero treatment.